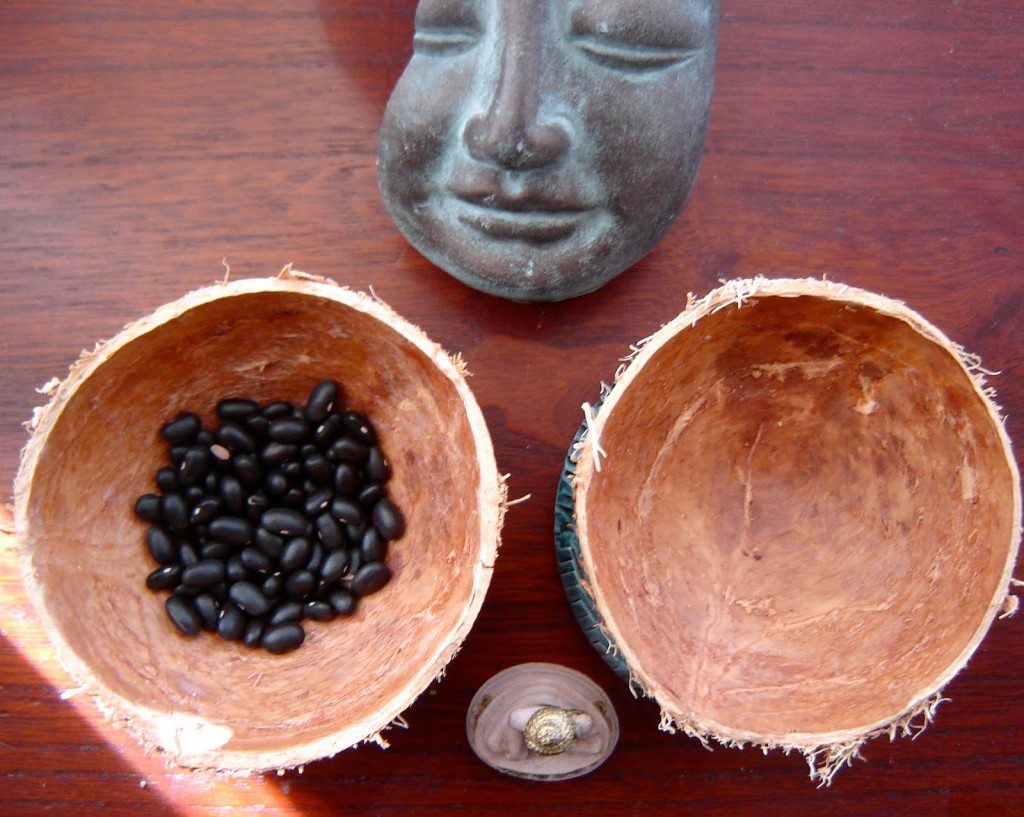 I have heard of Yogis that practice 108 sun salutations on the Spring/ Fall Equinox. To me, that seems like such a cleansing and beautiful ceremony to perform. Such an act of commitment and focus. Such a lovely way to honor life and the world we live in.

I woke up this morning thinking I want to do the same thing to ring in the New Year and to seal my commitment and promise to myself to begin a journey into truth.

So, to help me keep track of my sun salutations, I counted out 108 dried black beans and put them in half a coconut shell we had lying on the kitchen counter. The other half I left empty–so that I could transfer a bean after I closed each pose in prayer position.

Why 108? Well, you could go to this great blog post HERE and get a more in depth answer. But, for me, I know that there are 108 beads on the mala, which is a string of beads, much like a rosary, that is used in Buddhist meditation. To me, the 108 sun salutations symbolize a meditation in movement.

Before I began at exactly noon, I sat in my own quiet meditation for awhile, followed by a little journaling. I wrote why I was about to perform this ceremony on this first of a new year. I wrote what this practice means to me. 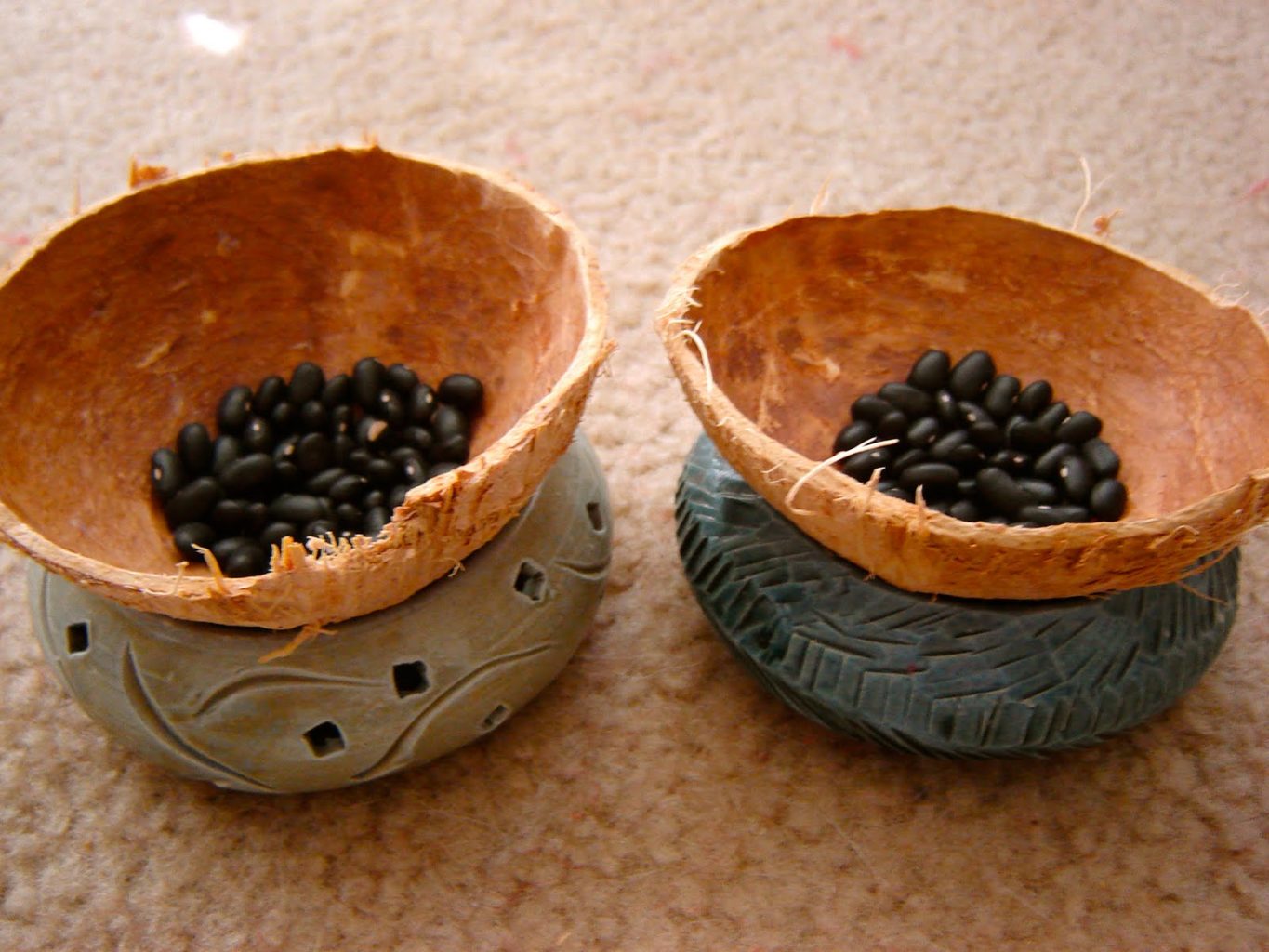 Thank goodness I decided to journal before beginning such an endeavor. Thank goodness I centered myself and created a concrete purpose for this practice, because by the time I got to my 40th sun salutation my mind started to interfere.

But who was I doing this practice for? You or me?

So it is at this point that I had to remind myself that the reason I was doing this is because it takes focus, concentration, strength, perseverance, discipline, HONESTY, and TRUST. It takes listening to my body and slowing down and resting when I need to, and changing things along the way as I go–but always staying true to the practice. This practice of 108 sun salutations is a test–one of many I hope–that will make me dive deeper into the truth of who I am. First of many, I hope, experiences that will help me release through sweat and tears and plain old letting go the things that no longer serve me. 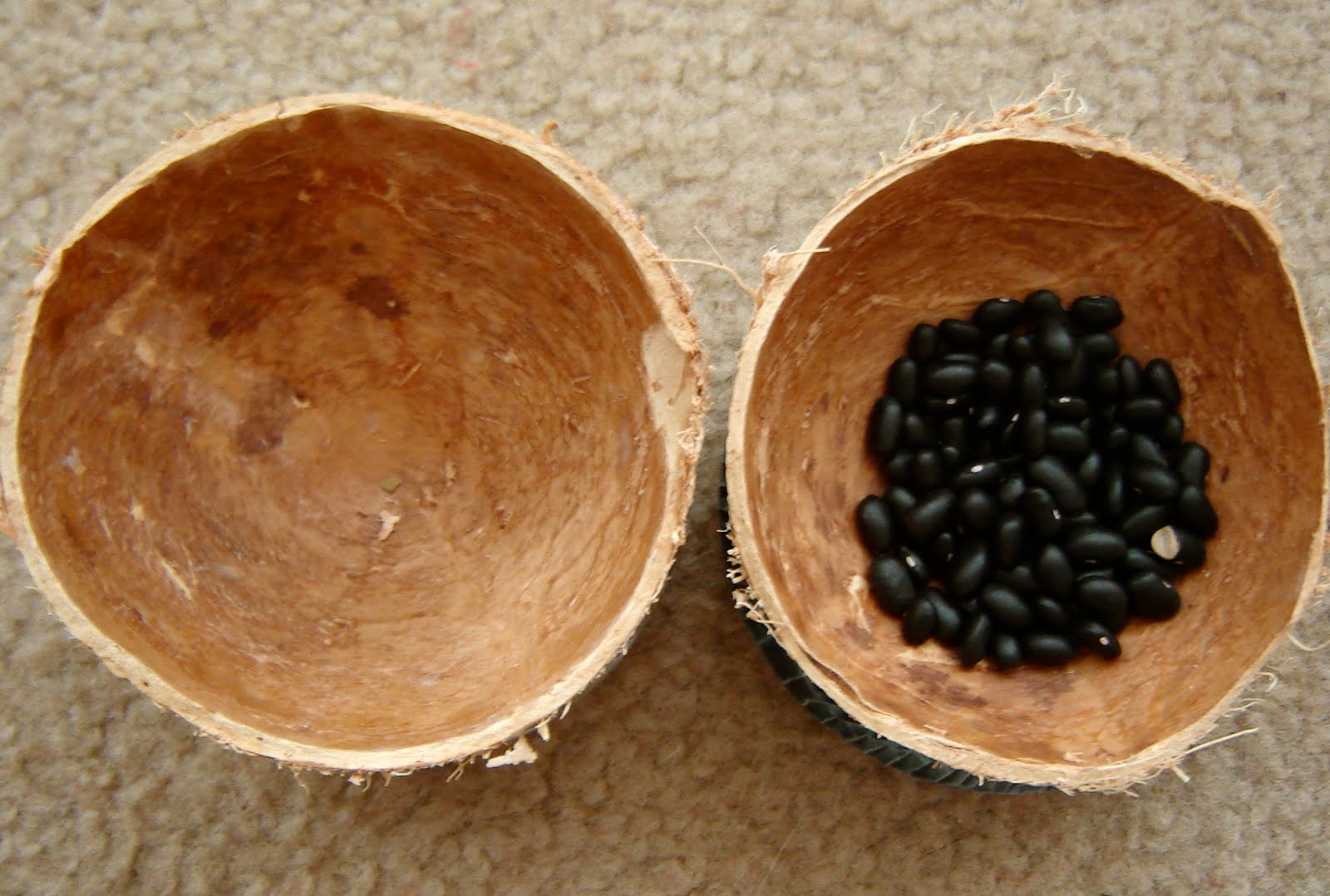 At 2:35 pm, I moved my last black bean to the second shell and stood in prayer position breathing deeply. In just a little over two and a half hours I learned so much..so very much about myself. At moments during this practice I felt like a dancer-smooth, precise, and graceful. At other moments, the same pose I just did felt sloppy and unsteady. Even though each pose was the same over and over–each repetition was incredibly different. This body that I call Connie changes from moment to moment–it is my pesky ego that wants to push it and tell it how it should be. But the truth in me, that was so alive and present during this practice–it knows different.

After I ended my practice, I laid on my mat for a half hour Yoga Nidra session. For those of you that don’t know…Yoga Nidra is one of the sweetest things in the whole entire Universe! It is also called Yogic Sleep…and it is so hard to put into words…so powerful…and incredible…that not until you try it, will you not fully understand. But I ended this journey today with a deep, deep rest.

I woke up shiny, grateful, and a little lighter.

I woke up ready for the long journey ahead.