Give ‘Em A Squeeze 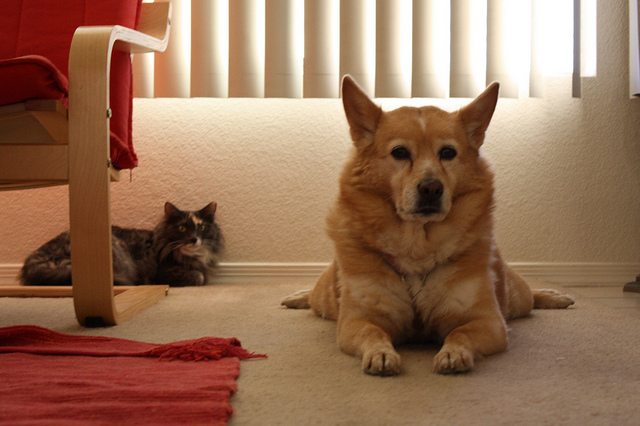 Growing up I always wanted a dog.  Always.

But, my Mom wasn’t too keen on animals so somehow I negotiated my way to having a rabbit–which are sweet and darling pets for sure.  But definitely no dog.

Back when I was in my 20’s living by myself in Cleveland–I was literally one block over from the Animal Protective League–and almost every Saturday I would take a little pit stop there on my way home from the Market to pet the poor dogs and cats waiting for adoption.  Then one day I met Nyla.

She was terribly skinny and timid and slowly walked up to the cage door when I whispered her name.  And I just knew–she was my dog.  We were meant to be together.

I went home that day and asked my landlord if it would be ok to add her to the family (I already had two cats).  And the second he said “yes” I was back at the APL with cash in hand.  Nyla was coming home!

We’ve been best friends ever since.

Nyla will be 12 years old in January–for dogs, I guess she’s definitely getting up there.  She has grey around her eyes and on her back, and she’s not always willing to jump up and lay with me on the bed anymore.  But she’s sweeter than ever.

It’s been kind of rough lately with Nyla because she’s been pretty sick.

First she had trouble walking–and we learned that she has terrible arthritis and a knee that keeps popping out of it’s knee cap.  Ouch.

But, my veterinarian is a holistic veterinarian and Nyla received just a few chiropractic treatments–and now she’s almost like new! She even jumps up on the bed again!  But the last couple weeks she keeps having diarrhea, and just this week it’s gotten worse then ever.  My doctor suggested to switch to a bland diet and see what happens–but she only got worse and eventually stopped eating.

So today we had another appointment.  After a couple tests we found out that Nyla has colitis.  A condition that is caused in dogs from stress.

What kind of stress I asked the vet–and he said stress caused from if a person moves in/out of the home, if they are put in the kennel for a long time, or if their master gets sick.

I told the vet that I’m 15 weeks prego–and for most of this time I’ve been terribly sick with morning sickness–so sick that some days I barely get out of bed or leave the couch.  He immediately said “Yep, that’s it.  Dogs pick up on when a woman’s pregnant–they can sense the different hormones being produced in your body–and that, mixed with worry because you were so sick–has caused her to become sick herself.”

Luckily this is something that can be cleaned up with some antibiotics and probiotics and extra TLC.

I love animals.  I love them so much that I could never imagine my life or home without there presence.  And, sometimes, I guess, I take them for granted.  Learning this about Nyla just ate away at my heart that her love is so big that she has worried herself sick over me.

And well, I just wanted to remind all of us—all of us with little creatures of our own–that these beings are gifts–pure blessings in our lives.  And their love is so precious–they are always watching over us.  And what a huge gift that is.

So, please, go grab your pet and give it a squeeze and let them know how much you appreciate them.  That’s what I did today–and plan to do so more often.