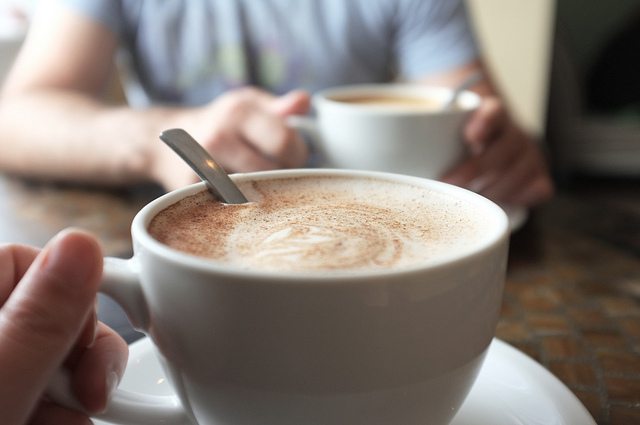 Hansel had an early Friday morning breakfast meeting for his work–and I decided to tag along to go hang out at the coffee shop across the street with the intention to do some reading and journaling. Instead, I became mesmerized with people watching.

It all started with the lady behind the counter that took my order.   She was obviously flustered by the morning rush and greeted everyone with a sour expression and a put-out, hurried attitude.

My smile and patience seemed to have no effect on her.  She was numb to any human kindness and instead quickly rushed me aside and moved on to ask the next person what they wanted before I could even get my credit card out to pay.

Then there was the short, little guy who came in driving literally one of those monster trucks that seem to terrorize the Arizona roadways.  Even though this is the busiest time of day for the coffee shop–and parking is sparse, he made a point to park his truck diagonally over two spots so that it would purposely take up even more space than it already obnoxiously does.  I had to chuckle when he got out.  He was such a little tiny guy in stature, pushing 60, and obviously dyed his thinning hair blonde.  He stood in line texting texting texting–and never once looked up.  Not even at the sour lady behind the counter when he ordered his latte something.  The thing about this guy is that he didn’t just walk.  He stomped.  He stomped out of his monster truck, across the parking lot.  He stomped those six feet in line.  And with his latte something in hand, he stomped his whole way back out again.

Next was the business man.  All dressed to the nines in a designer suit.  He had this incredible air about him.  Confidant. Determined.  Sexy.  Like he walked right out of a magazine ad. He stood tall and alert in line.  No cell phone in hand, but his credit card ready to go.  You could tell he was a pro at this.  A usual morning stop, I’m sure.  He ordered with a polite smile, direct eye contact,  and then left as finely pressed as he was when he came in.  But he surprised me as he leaned over and put his key into a 1960’s black Mustang.  The kind that has the white racing stripes down the middle.  Not what you expect from a man in a periwinkle dress shirt and tie sporting a carmel drink with whipped cream.

Last was the Grandma holding the hand to one of the most precious little girls I’ve even seen.  She had pigtails in her hair.  Pigtails.  Need I say more.  And Grandma didn’t look like your average Grandma.  Nope.  She was wearing skinny jeans snatched right out of the juniors section of JC Penny’s—the kind with the fancy embroidery on the back pockets and all.  On top, a tight little purple shirt covered by a form fitting denim jacket–possibly from the junior’s section as well.  But it was her hair that caught my attention most.  If you would be standing behind her in line you would immediately think she was a woman in her twenties.  She had long blonde hair–styled like any college student–except her face, with all those beautiful wrinkles of a life well lived, gave her age away.  She ordered a latte something and sat down on the couch with her granddaughter and handed her a coloring book and crayons.  The little girl scribbled in and out of the lines and Grandma paid more attention to the men that came and went. Finally, Grandma came over to me,  showed me her digital camera, and nervously said:

My friends say if I don’t take photos of my granddaughter, well, she’ll grow up so fast I’ll be sure to forget.  Would you mind taking a photo of us please?

I would love to.  And so she sat back down, wrapped her arm around the cutie-pa-tutie and I tried to coax the little girl into a smile.  But three photos later, she never smiled.

When I sat back down the cutie-pa-tutie ripped a finished page out of her coloring book and came over to show me.

Are you an Artist?  I asked.

No, no I’m not an Artist, her Grandmother replied–having no clue what her cutie-pa-tutie just did.  Oh, oh you mean her, she said.

And the cutie-pa-tutie turned around and went and sat back down.

At that point I had enough.  Twenty minutes had gone by.

I turned to look out the window for a second and watch the chubby little birds dance and prance around in the rocks next to the bushes.  The sun at this time of the morning is the most beautiful of golden.  And the breeze was so vibrant that it kept making the door to the coffee shop open and close magically on its own.

And hey! Wasn’t I suppose to be reading and journaling anyways?!?!

Maybe it’s because I spend a lot of time alone.  A lot of time just working and staying at home.  That sometimes, when I go out, I feel like the whole world is putting on a show for me.  I always become so mesmerized–yes, mesmerized is the only word I can use to describe it–by everything I see.

And here’s my whole point—my whole reason for sharing.  I feel our lives are overflowing with inspiration–seriously, just go and sit for a twenty minutes in a coffee shop.  Or turn the radio off when you’re driving and be fully present for the scenery.  Or look out the window during your lunch break, instead of staring at your cell phone screen.

Call me old fashioned, but I still believe that the best inspiration for my creativity comes from living–breathing–and taking in every little nuance of this beautiful life I live.

This is why I haven’t even batted an eye at that stinkin’ Pinterest thing.  This is why I refuse to jump on the bandwagon or worry if it’s infringing on copyright or not.

Spending hours pinning things that others have created/invented/dreamed of–just doesn’t appeal to me.

It only seems like it would get in my way.
Suck up precious time.
Steal my inspiration.