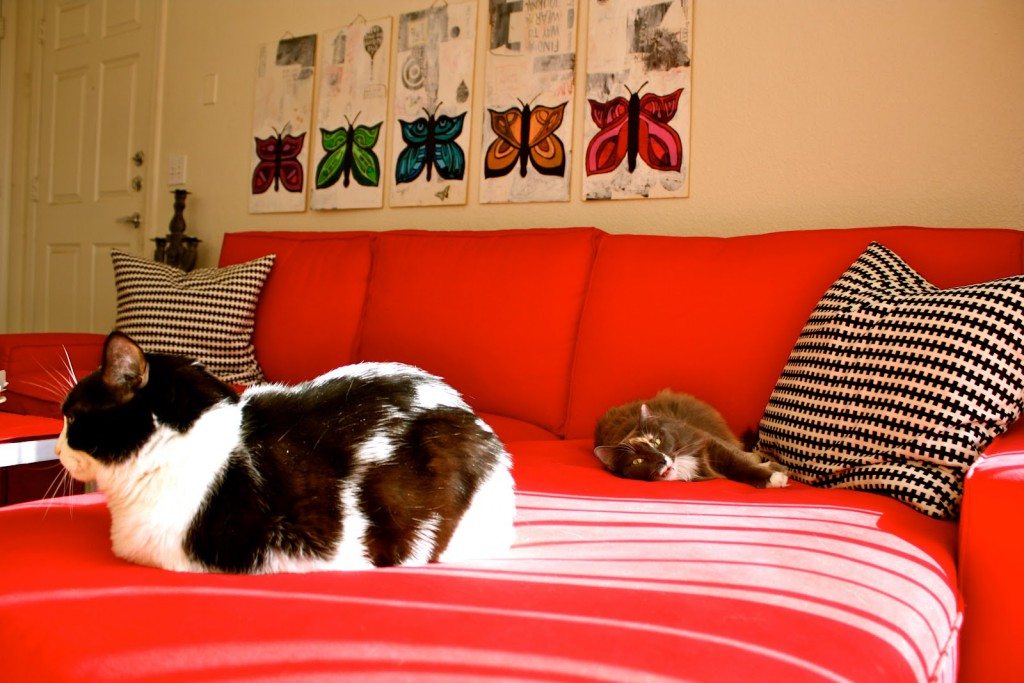 My very first couch was pea green.  Straight out of the 1970’s and taken from my Grandparent’s basement.  My friend Pete and I strategically carried it up a tiny stairwell into the 100 year old duplex I lived in during my twenties.  We kept laughing the whole time and went for pizza and drinks once we finished that task.

The feet on that couch broke and finally when superglue wouldn’t do it’s job anymore, my next couch was goldenrod and an afterthought from the 1980’s.

My boyfriend helped me move this one.  I was barefoot.  It was summer.  And accidentally we dropped it on my foot as we squeezed it through that tiny stairwell.  He got very mad at me.  Said how stupid could I be to move furniture barefoot.  Once we got it in the living room he left and went back to work.

I sat on it with ice on my toes.

Years later, I met Hansel, and we would sit on that couch more times than I can remember.  Share random conversations, arguments, and dreams.

But when it came time for us to leave, we left the couch sitting there on the front tree lawn.  Waiting for anyone to pick it up.  Give it a home–add to it’s history.

I don’t think I’ve ever told you this, but for years I was an assistant in a studio that made custom work for interior designers.  We did sewing and upholstery and all things furniture-y!  I know just about all there is to know about couches, except what it means to have one that truly belonged to me.

Every couch I ever had was somebody else’s trash.  Something they wanted to get rid of to make room –create space.

Even the couch we’ve been living with here in Arizona–the one that I purchased off my boss from the studio I worked at—the one that I sawed in pieces, vacuumed packed it into boxes–then glued it back together when we got here.  It belonged to her boyfriend and now they were moving in together.

It wasn’t even a couch, to tell the truth.  It was a futon and made lots of noise when you sat on it.

Now, I know it might sound funny.  It may even seem like not that big of a deal.  But Hansel and I have finally bought our own couch.  It even has that brand new smell and came with official delivery guys in uniforms.

But what I love about it is that it’s the color of the root chakra. The place we’re connected to the earth.  The energy field that we subconsciously call home.

And we purposely wanted it because it’s big enough to hold us both, our two kitties, sweet dog Nyla, and our soon to join us little one.

I know it’s just a couch.  Simply a piece of furniture.  Something that will get old and maybe end up one day in my son’s first apartment somewhere.

Roots that will grow deeper and deeper.