The Tale of the Two-Headed Blue Fish with Yellow Whiskers 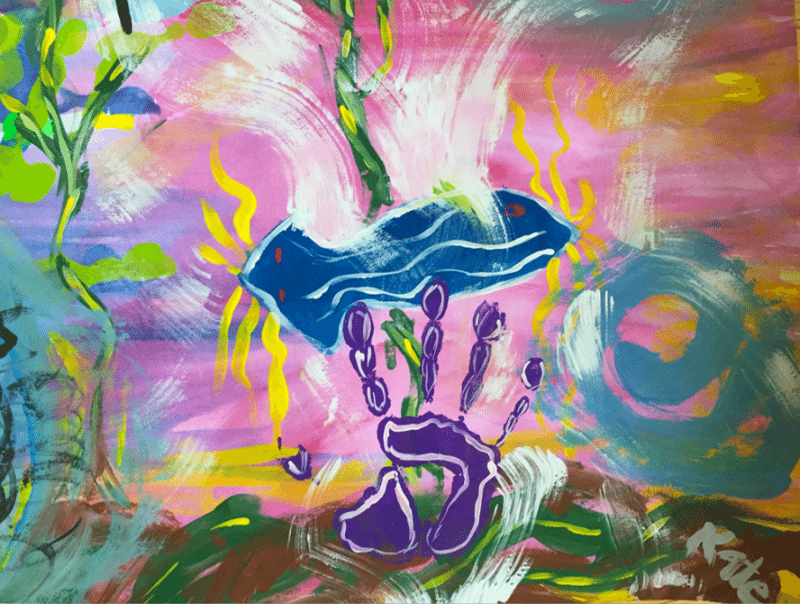 Every Wednesday throughout 2016 one of my beloved IGNITE Peer Mentors is sharing their creative wisdom and insight in a brand new blog series.

IGNITE Peer Mentors are women who successfully completed my IGNITE Online Intensive and are eager to deepen their own skills and intentions as heart guided artists by mentoring a new circle of women in IGNITE.  This is the first year that I am incorporating Peer Mentors into my program and I am absolutely thrilled to work side-by-side with such an inspiring bunch!

You can check out past Peer Mentor posts by CLICKING HERE.

Once upon a time, not so long ago, there lived a curious soul seeking a new venue for creative expression.

Doing what any modern soul does in the 21st century, she took to the Internet to find a class or workshop that intrigued her. She stumbled upon a “process painting” three-day workshop in a beautiful setting on a lush green island near her home. This was perfect, almost.

She loved the idea of process painting having had very little formal training with paint up to this point. Painting had frequently called to her throughout her life but she told herself she was not an illustrator and therefore couldn’t paint anything to her satisfaction. Process painting didn’t care about the outcome. This felt very freeing to her. But something more was calling to her so she continued to search. The island retreat still had a couple months until the early bird price went up.

Following breadcrumbs from various social media posts she discovered Chris Zydel, the Wildheart Queen. “Now that’s what I’m talking about”, she whispered to herself. “This is the person to guide me on my painting journey”. There was the added bonus that the workshop was in Oakland, CA where her daughter lived. Excitement and trepidation accompanied her preparation – but in truth, the only thing she had to do was show up. Thoughts of “will I embarrass myself with my lack of skill? Can I paint for five days without getting bored or frustrated?” occasionally passed through her thoughts. But her intuition was strong–“Do this”, her Muse commanded. And she listened.

The workshop was glorious!

It was a free flow of love and color and connection and insight and trust and more love. She highly recommends it and not once was she embarrassed or bored or frustrated. In fact she could have gone another five days (and perhaps even another five days after that). Many paintings spoke to her but none louder than the blue two-headed fish.

This was probably her fifth or sixth painting and she decided to just play. 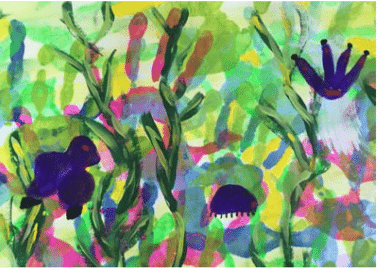 She started with handprints – painting her hand various colors and placing them on the paper. Some of the kelpy looking lines came in, and the blue fish – which became the two-headed blue fish with yellow whiskers. Although an interesting image, it did not speak or have any energy. She continued to play, and play. Adding to the picture that which was called to come in. At last her body said, “stop”.

She called Ellen, Chris’ illustrious assistant, and told her she was done. As is protocol, Ellen asked her if there was energy for anything else. “No”, she said “I feel like I’m done but I don’t know what that blue fish is about. I’m curious about it but nothing comes up”. The fish was silent.

Ellen asked her “If three things were going to come into the painting, what would they be?” she named a couple, each time Ellen asking if there was energy for that. “No”, she said.

The third thing was white whispies – soft white lines in and around the fish. Low and behold there was energy for that – her intuition said yes to white whispies. She gathered white paint and a fan brush and proceeded. The first couple brush strokes went as planned (notice the planning part) and then the unthinkable happened. A glob of white, not a whispie at all, smeared the blue fish. “It is ruined”, she wailed internally (in reality, how do you ruin a two-headed blue fish with yellow whiskers, I ask ya?). Her physical reaction was powerful, deep, and swift. She felt such despair and anger that she had “ruined” her picture. She could only stand and look at it for a long time. “Let me see if I can fix it”, she thought. She picked up a different brush and dipped it in white.

“Don’t fix me”, the fish said emphatically, “There is nothing to fix”.

At first astonishment and then laughter healed her despair!

Up until that moment the fish had been a curious and silly image. But the fish was simply waiting for her to be receptive. It came into form to remind her it is not her job to “fix” things, as there is nothing to fix.

To this day, whenever life presents a situation or person (aka teacher) where her critical mind seeks dominance and she is tempted to rely on the automatic pilot response of her past, the fish presents its image in her consciousness and gently whispers, “There is nothing to fix” and she can let go of futile attempts to control.

And Life is Good. 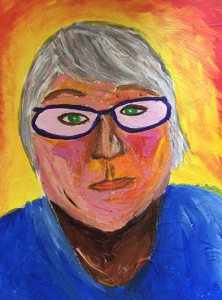 Today’s Guest Post was written by Kate Elliot, Peer Mentor for IGNITE 2016.  Here is a little about Kate…

As an artist I believe in creative expression for its own sake and art as a means of interacting with the Divine, or the Invisible(s) as I like to call them. Everyone is creative, we are born with an inmate desire to express ourselves. Sometimes we forget this or we don’t pay attention to life’s subtleties and details. My joy and passion is facilitating that remembrance. I create art and workshops that speak to the Creator in each of us. I draw your attention to your own unique voice and how and what it wants to express. Through art I encourage your authentic voice to speak and invite you to court its Presence and uncensored expression.

My offerings are both local and online. My current passion is facilitating Intuitive Painting workshops in my home studio, and Creative Practice as Spiritual Practice as an online workshop. My intention is to grow as an Artist and my workshop offerings will grow with me. My purpose is to live so that my heart, body, soul, mind and the Divine co-mingle as one voice. To play in the realm of the terrestrial while courting the realm of the Invisible. Art, and creative expression is a bridge between the two. Come walk it with me.

Kate resides in Seattle, Washington, USA and can be found online HERE.