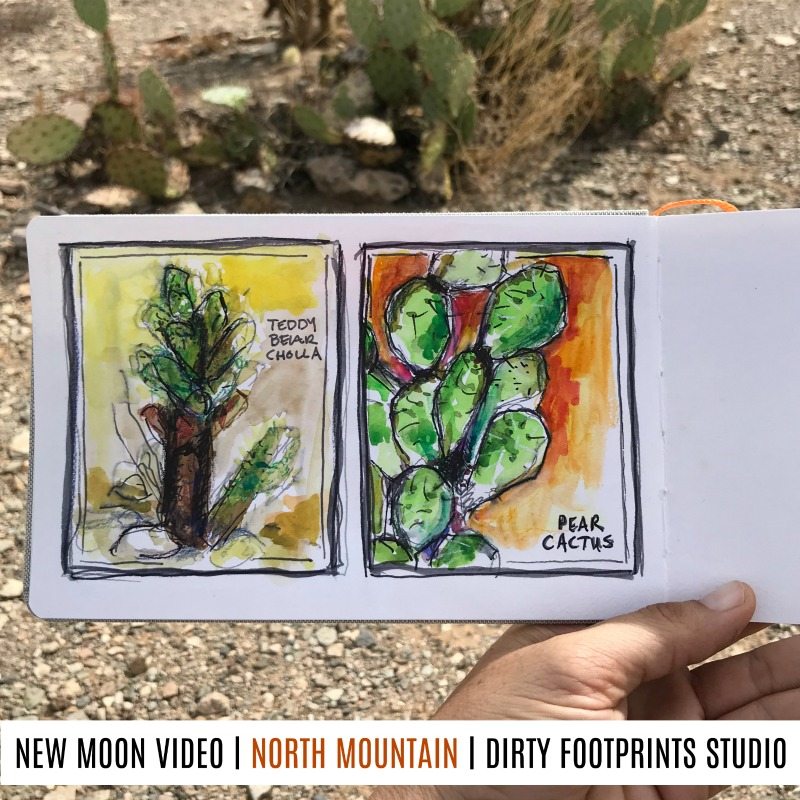 I am writing you from wonderful Oaxaca, Mexico where I have been teaching my Paint FEARLESS Mexico retreat for the past two weeks. (CLICK HERE to take a glimpse at some of the fun being had!)

Right before leaving — like literally a day before — Hansel and I shot this month’s New Moon Video.

In this quick little video I decided to try out my new Koi watercolors and Prismacolor watercolor pencils by simply doing a few quick sketches at one of our favorite hiking places in North Phoenix, Arizona:  North Mountain.

I didn’t realize it at first, but it’s kind of funny to me that I chose the teddy bear cholla and prickly pear cactus to sketch.

Twelve years ago, when Hansel and I first moved to the desert from Cleveland, Ohio we went for a hike and I became absolutely enamored by the teddy bear cholla cacti.  So much so that I felt mesmerized by them and like a total fool reached out my finger and touched their not-so-fuzzy-exterior. Needless to say it was a painful lesson in desert life that I immediately learned.

Now let’s fast forward two or three years later to the time Hansel and I were hiking on a hot day in Sedona.  In Arizona prickly pear cactus is a common staple at many of the Mexican restaurants and so it didn’t seem so strange when Hansel cut off a leaf off the prickly pear cactus on the side of the trail and started to scrape all the thorns off with his pocket knife. Once it appeared clean as a whistle, Hansel took a little nibble

Did you know that prickly pear cactus have mini-microscopic baby thorns that are next to impossible to see?

Well, yes, they do – and a whole herd of them became embedded in poor Hansel’s tongue that day too! Ouch!

I bet wolves have way more common sense than we ever did when it comes to cactus.

Anyways, Hansel and I hope our New Moon video inspires you to go outside and fall madly, deeply, WILDLY in love with the landscape of where you live.  All you got to do is simply pick up a paintbrush or sketch what is right outside your window.

Sign up to get blog updates sent straight to your inbox

A Peek Into My Journals

When Art Comes Through You