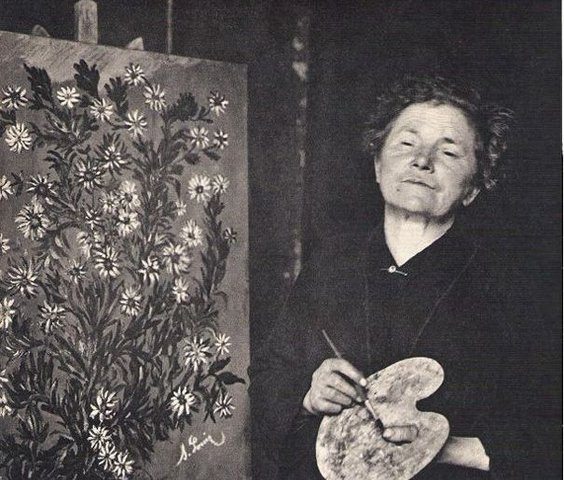 This is Seraphine Louis, and I absolutely adore this portrait of her. I’m mesmerized by it. She is how I picture myself as an older Creative Juicy version one day. Maybe it’s the hair…or how she loves to paint tiny little details. Something. But, before yesterday on Twitter (thanks BlissChick!), I had not known about this very cool chica. And now I want to learn everything I can.

Here are a few of her paintings…and what is written about her on Wikipedia HERE. 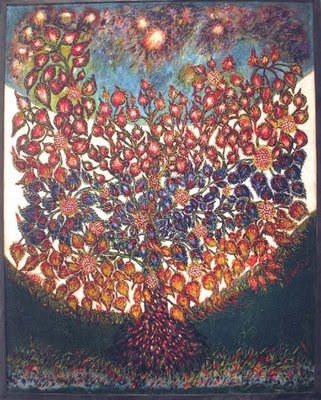 Alongside her arduous day jobs, Séraphine painted by candlelight and largely in secret isolation, until her considerable body of work was discovered in 1912 by art collector Wilhem Uhde. While in Senlis, Uhde saw a still-life of apples at his neighbor’s house and was astonished to learn that Séraphine, his housecleaner, was the artist. His support had barely begun to lift her horizons when he was obliged to leave France in August, 1914, with war between France and Germany making him an unwelcomed outsider in Senlis, much as Séraphine was, given her eccentric persona. They only reestablished contact in 1927 when Uhde – back in France and living in Chantilly – came to an exhibition of local artistry in Senlis and, seeing Séraphine’s work, realized that she had survived and her art had flourished. Under Uhde’s patronage, Séraphine expanded her canvas, literally (with an apparent preference for canvases two meters high), and she came to prominence as a naïve painter of her day. In 1929, Uhde organized an exhibition “Painters of the Sacred Heart” that featured Séraphine’s art and launched her into a period of financial success she had never known – and was ill prepared to manage. Then, in 1930, the effects of the Great Depression undercut her patronage, as Uhde was obliged to stop buying her paintings. In 1932, she was admitted for “chronic psychosis” to the psychiatric ward of a geriatric hospital at Clermont, where her artistry found no outlet. Although Uhde reported that she had died in 1934, Louis actually survived until 1942, friendless and alone in a hospital annex at Villers-sous-Erquery. (Some exhibitions still suggest she died in 1934.) She was buried in a common grave. 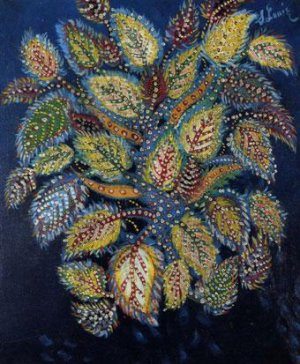 Séraphine’s works are of richly fantasized, intensely repeated and embellished floral arrangements. She utilized colors and pigments that she made herself from unusual and exotic ingredients, whose secret composition she never revealed, colors which have stood the test of time for durable vividness. Her surfaces have a matte, sometimes almost waxy appearance. Sometimes her signature (typically “S. Louis”) is carved by knife, revealing an undercoat of contrasting color. In some cases, she seems to have signed her paintings before painting them. 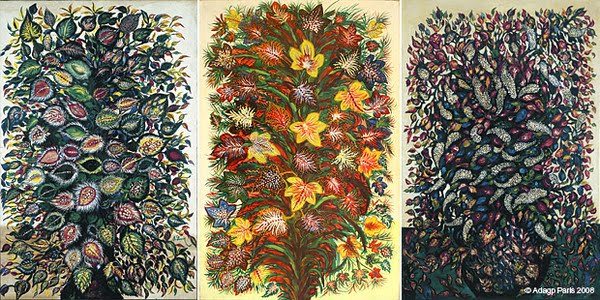 A movie was made about her in 2008, you can see the trailer HERE.

Also, go HERE to see more of her work in detail.