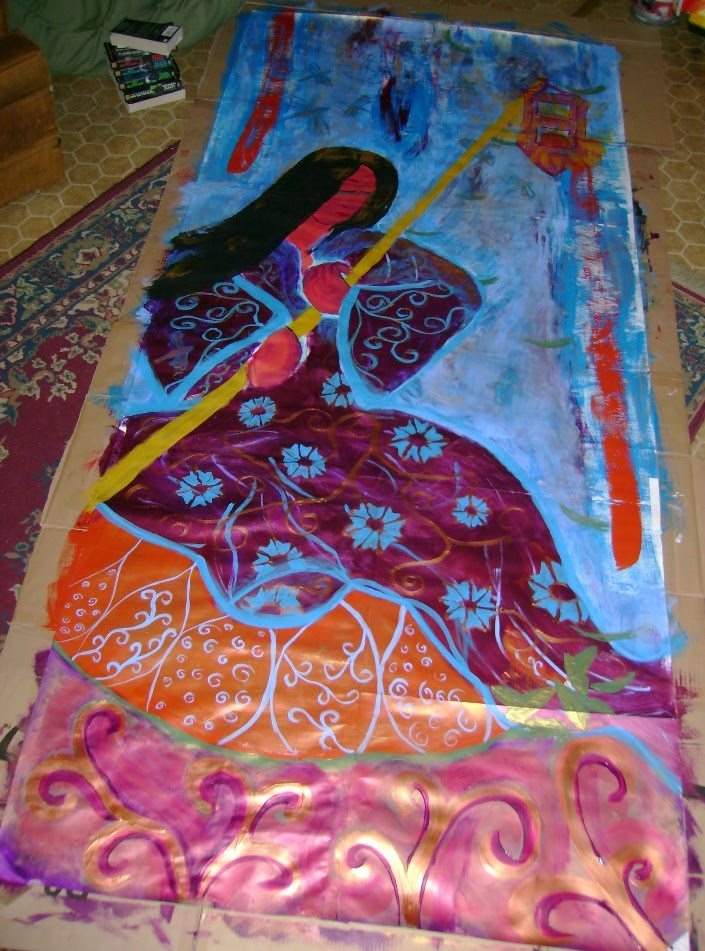 (or, what it means to be fearless to me)

I am still one of those kids who thinks I am special. There, I’ve said it. I believe that I can still be a movie star, or a ballerina (not professionally ;), or a short order cook, or an Indy driver, you know, if I want to take the time to learn how to do any of those things. I still believe that it doesn’t matter how old or young you are, if you have the will and the desire to do something, you totally can. Enter the BIG journey. 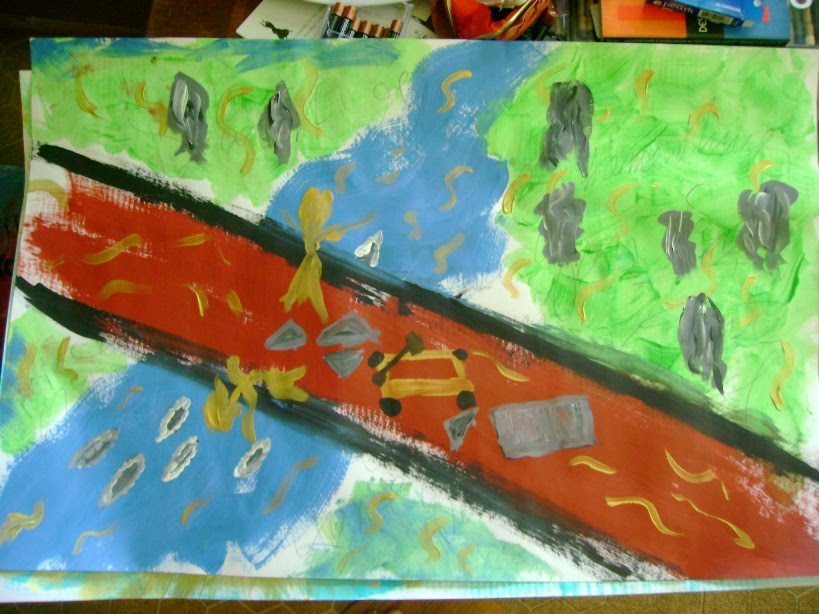 Week 1 Five Year Old Painting
I did not know what to expect of BIG when I registered. Half way through a year of ‘resets’ that left me in a limbo of, “where to go?” and “what to do?” I began registering for online classes. First I registered with Chris Kay Fraser to join her Satellite Writing course. I’ve been writing memoir materials since May and alternately loving and hating it. In June, I signed up with Jamie Ridler for her Circe’s Circle coaching program, but there wasn’t enough interest at the time, so I opted to wait for another group. In the mean time, I kept seeing Connie Hozvika’s BIG (among other things). I cannot even say for certain now what it was that drew me in… maybe the pictures of those amazing women, lying, spent, happy, paint-spattered, on the floor next to their works of art, next to their BIG paintings. Maybe that was what I really wanted when I started? Maybe all I wanted was some cool, iconographic picture of myself lying next to my own amazing masterpiece. Connie could help me do that through the World Wide Web. Couldn’t she?
So there wasn’t necessarily disappointment at our first assignment, but perhaps a little feeling of being let down before I realized what a gift those first exercises were.
I have to back up slightly. I am a person who is familiar with processes. Dancemeditation™ is a process. Vision Quests are a process. Writing is a process. Strength training and flexibility are processes. Any time I encounter a teacher with a process the first thing I have to do is ask myself, “Do you trust this person?” because usually, if I trust the person, I can trust the process. For whatever reason, I trusted Connie. I guess it was there in her blogs, her honesty, her frank, blatant statements about how human (flawed) she still is, even after figuring out so much in her relatively brief life. And this is what gets me, if you want to know how to totally snow me over – speak for your humanity and how you are still wallowing in it every time you try to reach for the stars. I’ll follow you anywhere.
I trusted Connie from the gate. So I ran out, got my supplies, waited patiently for the first assignment and began to realize that the thing I might love the most about this was just having new art supplies. Yup. There it is. I loved the art supplies more than the idea of creating the art. I loved remembering the art room of my grade school and all of our big, square tables, cubbies, covered with years worth of charcoal dust, paint splatters, inky finger-prints and the creativity and excitement you could feel just by walking in the room. I missed the feeling of that experience. It was the excitement of not knowing what would be happening, but that whatever it was, it would be totally cool. According to teachers (a teacher maybe) I was not any good at art. 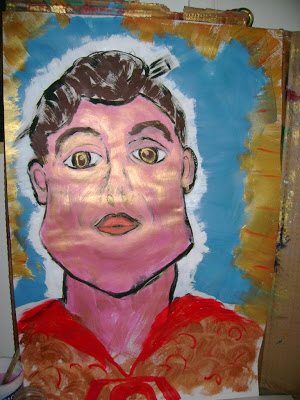 Week 4 Contours
At week 4 my World shifted. Our assignment was contours. I felt somewhere that ‘it’ would go horribly wrong. But the most amazing thing happened. After three weeks of following the process and creating space for each exercise I was able to quiet my inner critic before she had a chance to stop me from laying the first brush stroke. Even though I would feel her flinch or press against my will in an effort to change what I was doing, I was listening to a deeper voice. And I followed that voice until it said we were done. The next morning I felt the shift, I felt like a painter. I felt the dragon-critic curl up and sleep against the non-reaction. 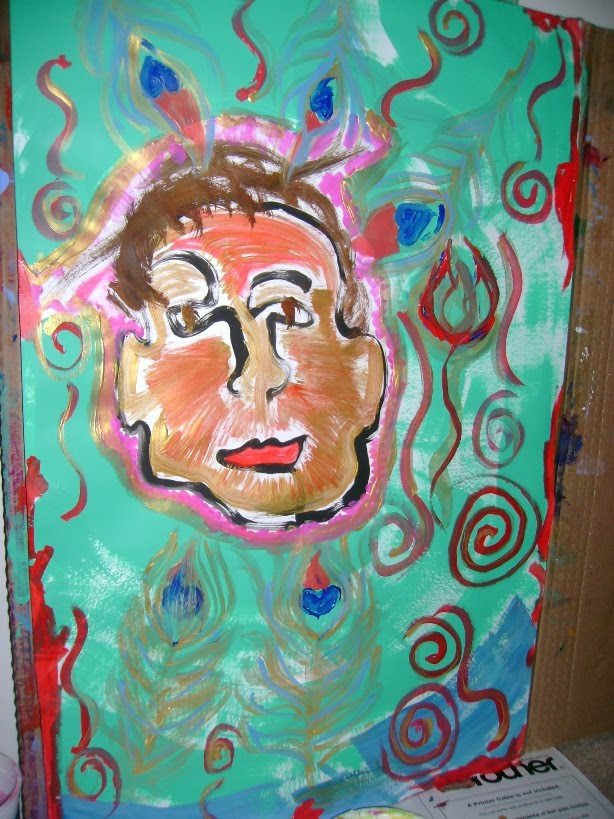 During weeks 5 and 6, I had awareness of a sense of purpose that was not present at the beginning.

Between those last-two weeks I had a four day period with the house for my own and I used it, I had planned for it. The sheets of paper we were instructed to purchase measure 23×36 in most cases. Painting on just one sheet never presented a challenge, but when painting three or eight sheets taped together – the little 3×5 space I’d carved out for myself against the wall in the studio or on the floor in the living room was not going to cut it. After securely taping the skeletons of three cardboard boxes together, I pushed back all of the furniture in the living room to the walls and created a space on the floor big enough for a 9’ x 5’ canvas – with a bigger cardboard box drop cloth underneath. 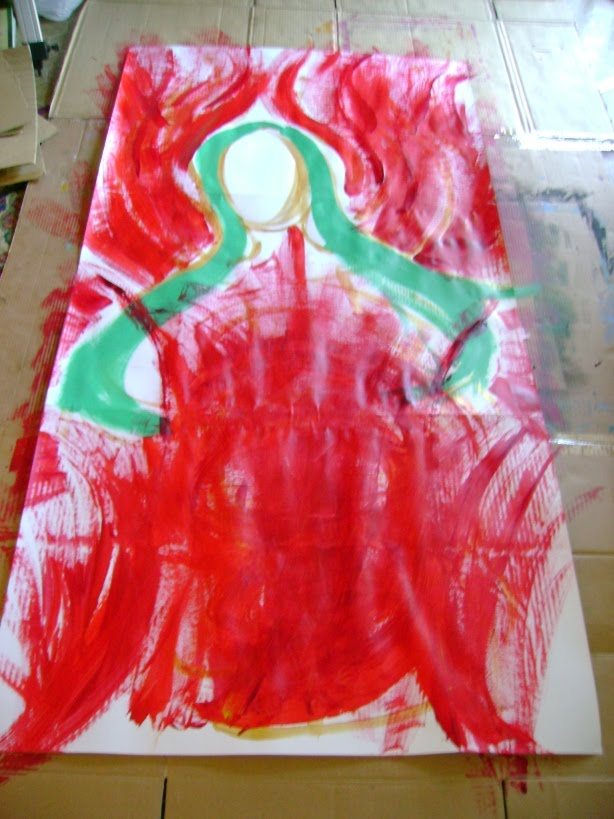 Week 5 Phase 1
This “Daring Big” thing was a bit trickier than contours. There was a whole heckuva lot more empty space down there than before. And I just stared at it. Okay, so? Where’s that purpose I was talking about earlier? Well, the purpose was a vision I had been having ever since Connie gave us that week’s ‘inspiration’. I knew what I was supposed to paint. I had seen it, she was beautiful, magnificent! This was the moment of the picture. At the end of this exercise I would take that beautiful, contented, powerful picture of myself with my newly-birthed painting, bold, transformative… captivating.
I went through the ritual: creating the space, laying out the ‘drop cloth’, taping down the canvas, choosing my pallet, and brushes, filling tubs of water and placing them around the work area. Finally finding the right Rhapsody station, I was ready.
And go!
Annnnnnnd go.
And go?
I sat on the edge of the couch staring at the blank page and then pacing up and down the length of the canvas making imaginary brush strokes. And then the song was good, so I just danced. When I looked back to the paper, my body still moving with the music, I felt something in my brain – kind of like a bad driver shifting a manual transmission – ch-chunk. At first it was almost jarring, because I resisted it, but then, something just allowed me to step aside and I started painting. There is an exercise in Dancemeditation™ where we follow our actions, we try to step back and as an outsider, observe our own movements. This was what I found myself doing consciously. 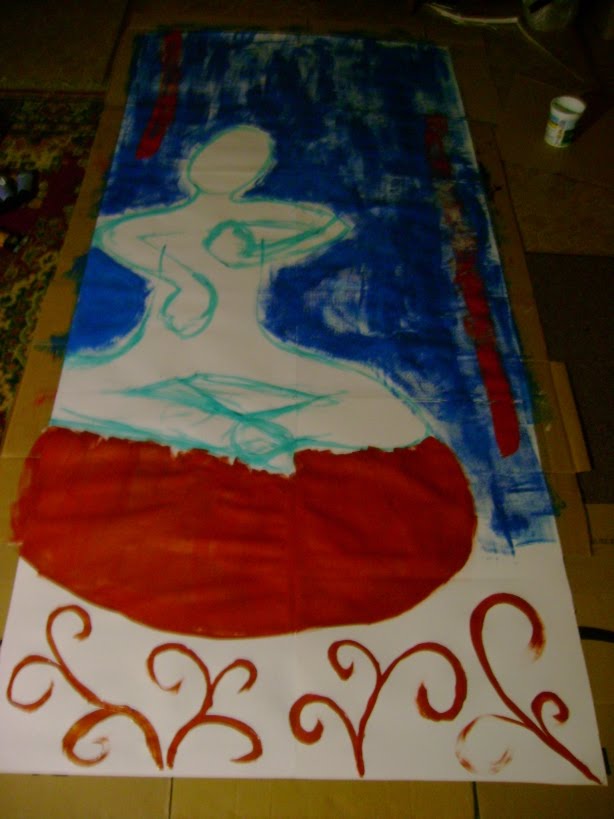 Here, painting, I found I was uncomfortable with the thought of product, in dance I can close my eyes and just feel, dance is also fleeting – there are usually no records of it. I have never consciously felt the shift in my brain’s activity from left to right hemisphere. But I feel now that this is exactly what happens when my awareness changes from the act of doing to the act of allowing. I was following myself, allowing myself to paint – and all I did was observe my feelings.

I remembered Connie talking about making shapes and just making the shape again and again until it was the shape you wanted, because you can always paint over it. Of course she tells you not to paint over it unless absolutely necessary, but I was going to use necessary with a pretty broad scope. And it was a good thing, because this was not going at all the way I envisioned. But that was okay. Once I made the first stroke, the real voice became louder than the critic, and we just danced. 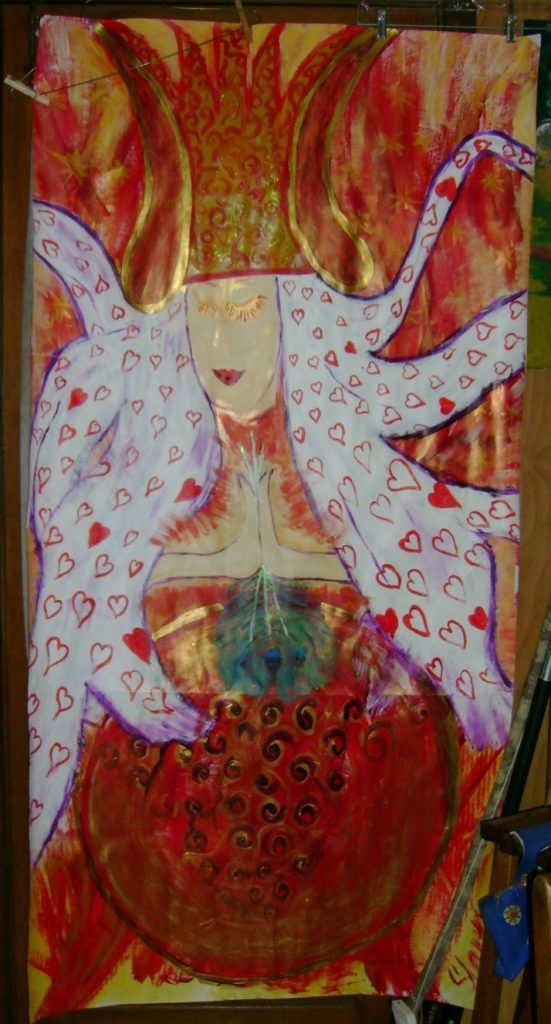 Week 6
She was nothing that I envisioned, but more than I could have ever imagined of myself as a painter.
The same became true of my 6th week’s exercise as well. I stood over the initial canvas and with the vision I had been seeing all week I knew it wasn’t going to be big enough. So I added panels. I also knew when each of my paintings was done. They were just done when they were done and they told me so. I believe that when people say, “I gave birth to this creation.” Usually what they are saying is, “This thing had to come out of me and I had no control.”
And that’s what being BIG and being FEARLESS now means to me, which isn’t so far off from where it started for me, but now it’s polished and stuff, honed even. Oh yeah, to me, being BIG and Fearless is all about feeling that thing inside that has to come out and letting it, especially when you have no control. 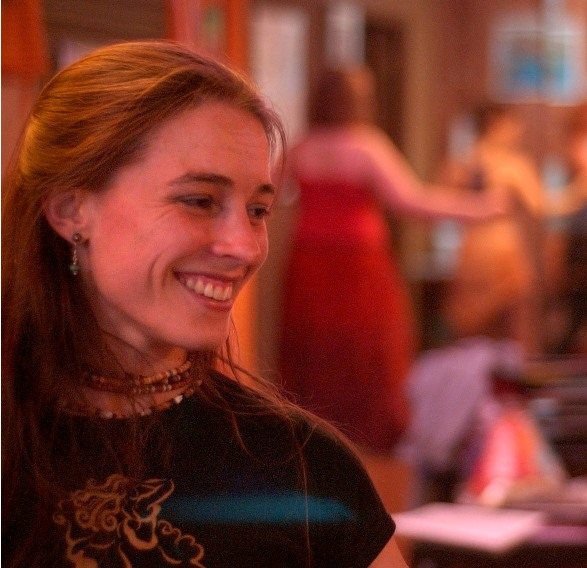 Shamsi (Charlie Pettus) is a dancer with a background in Middle Eastern, North African, Persian and Turkish dance, Bharatanataym, Yoga and Tai Chi. In addition to being one of 23 certified teachers of Dancemeditation™ in the world, Shamsi is a Certified Angel Practitioner, Certified “OM” (Oracle Messenger) and a Level III Usui and Kundalini Reiki Master. Shamsi offers classes in Dancemeditation™, bellydance, Reiki, meditation, communicating with your Angels, among other amazing and awesome stuff. She also offers intuitive readings, intuitive-painted readings, cord-cutting, Reiki and more locally in South Louisiana and around the nation.