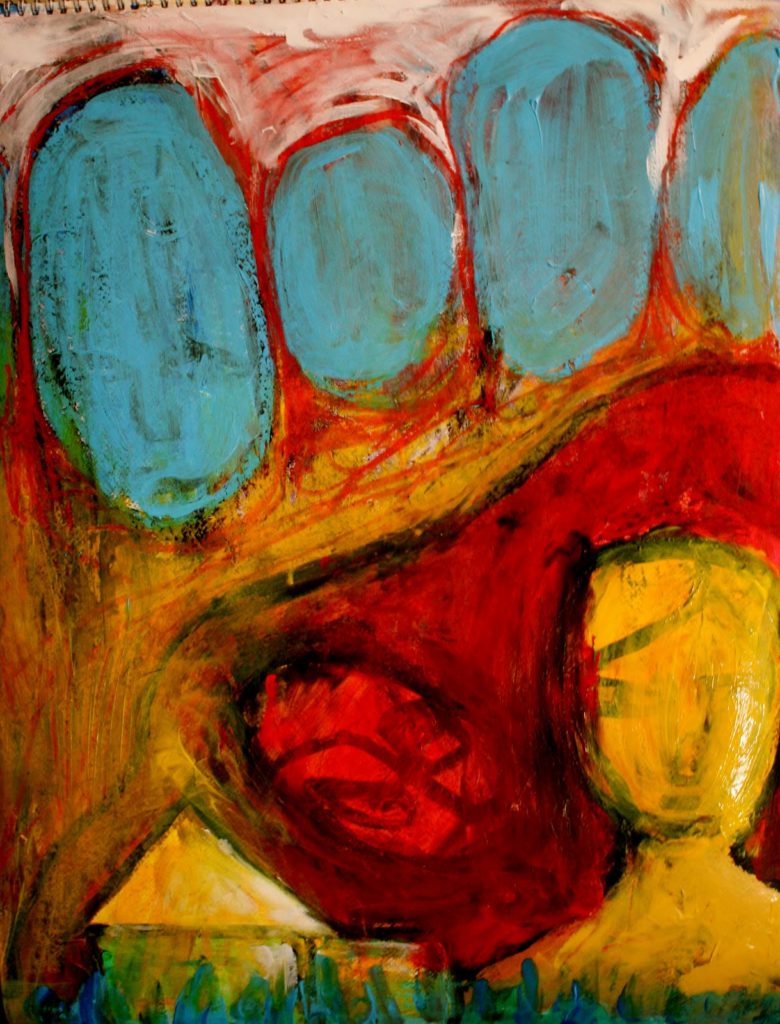 We artists need to be travelers on paths less travelled.

My best friend Andrea is a full time Artist.  A ceramicist if we’re gonna get picky about labels.  But she makes her living off of working full time in the studio as well as part time as a professor in the local community college teaching Ceramics.  And this time of year she always goes a little kooky.  I see it again and again–and have to sweetly remind her when she’s in the midst of all her anxiety and frustration that this happens every year and will reside once the holiday show is over.

But a couple days ago I asked her a question–I asked her: Do you feel resistance toward making the work that you are creating purely to make a profit–compared to the work you make that you exhibit in galleries and create from a different intention?

Her answer was: Oh my gosh, absolutely.  I hate making the work that I create only because I know it’s what’s gonna sell at the shows.  It’s draining and takes so much out of me.  Andrea then went on to say that this year she didn’t have as much work as usual for the holiday show but she didn’t care.  So much has been going on in her life that she wasn’t going to kill herself over it.

But she knows there’s a price to pay–and that price will be a cut in her income for sure.

The thing is–Andrea loves teaching.  Absolutely loves it.  Andrea and I actually met in college when both of us, after having our Art degree and a few years of teaching under our belt, went back to school for our Art Education credentials.  The great part is that we actually lived right down the street from each other too and never knew it!  Been friends ever since!

Anyways, I suggested to Andrea why not next year she try to create more teaching opportunities and put less energy into creating work that doesn’t fuel her.

Andrea has this absolutely beautiful warehouse studio—(I hosted my first Dirty Footprints Studio workshop: Creative Dig there even) which I suggested would be perfect to start holding group and individual classes in.  Plus, I remember when I lived in Cleveland, I had tons of teaching gigs–that’s how I made my money as well.  There’s lots of opportunity for her as an independent teacher–especially when she already has the space.

I think the trap that Andrea feels she is caught in is a trap that many Artists fall into.  The belief that to be an Artist means you have to be making and selling your work full time.  Somehow that label Artist automatically conjures up ideas that one’s worth is based upon the frequency of sales.  Now sure–for someone like Andrea who has consciously chosen to live a life where her livelihood comes from being an Artist–this pressure is more real then ever.

So many people I meet in my workshops and see online “dream of making Art full time”.  Which is great! Wonderful! Fabulous!  The world needs more Artists willing to live their truth.

But what the world doesn’t need is more Artists out there making crap or wasting their beautiful voice and vision on things that they create from a place of desperation just because they know it will sell.  What you got there is a machine–not an Artist.

What a lot of Artists who dream of making Art full time don’t fully realize yet is that the second their work turns into commerce–that feel good gooey feeling begins to shift.  I’m not saying that it still isn’t there–it just becomes clouded by other things.  Like marketing, taxes, bills, and tons of other business related facets  that need to happen simultaneously with the creative process.  If that part of being a “full time Artist” doesn’t fuel you–then you are harming yourself more then helping.

Andrea and I both know this Artist who was living in NYC for almost the last 20 years.  He made quite a name for himself out there as a painter–was in tons of big galleries and written about in the big magazines.  He recently moved back to Cleveland to take care of his sick mother–and Andrea had dinner with him last week–where they discussed his philosophy on making Art.  He told Andrea that he only works on paintings in Autumn and Winter.  That’s it.  Spring and Summer is meant for living life, researching, reading—doing things that fuel his soul–so he can create work that is meaningful.  Because he believes in viewing his work in terms of a bigger picture—this bigger picture being that he is not creating Art to sell (even though all his paintings sell for thousands of dollars each)–he believes he is creating a body of work that represents his life.

Hearing that I wanted to jump on the next plane to Cleveland, hunt him down, and hug him.

Here’s an Artist I highly admire, who’s work is considered of great value, and his ethics behind creating it is so in alignment with the truth of who Artists really are: human.  Not machines.

And yet, he doesn’t depend on making Art to be his end all financially–he has another job working in the Cleveland Art Museum that also fuels his heart and soul–that provides for him the opportunity to live comfortably and still make Art.

He sees the big picture.

That’s why at the beginning of this year I quit doing commissions and closed down the ol’ Etsy shop.  Making work under the terms of commerce wasn’t fueling me as an Artist.  At first I liked it–because well, I’ll admit it–isn’t that what an Artist is suppose to champion–being paid to paint?  But after a while of doing them I started to resent doing them–then I started to hate them.  And when hate arrived, I simply started giving my patrons their money back and explaining that I much rather disappoint them in not doing it–then to create a piece of work for someone that comes from this place of totally not wanting to do it.

I saw the bigger picture.  And the thing is I still paint every day of my life.  But now I fully love it.  Absolutely love it.  And I make my living being a full time Artist–fueled and connected to my truth.