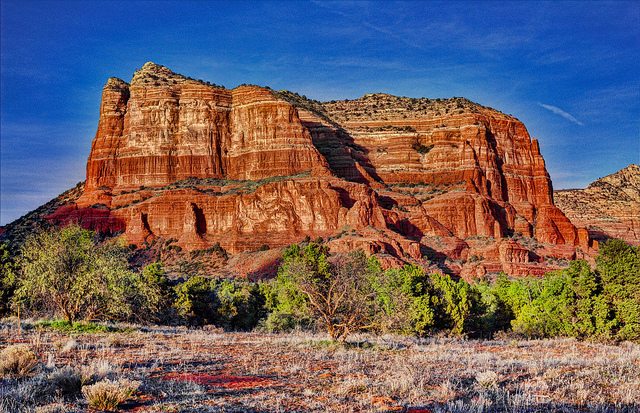 A year before Hansel and I moved to Arizona, we came here on vacation to Sedona.  One of the days we spent hiking and got ourselves a little lost.  When out of nowhere this great guy–who I believe was some kind of park ranger–walked with us and guided us back to where we started.  As the three of us walked together we came across this huge house snuggled away in a beautiful landscape.  Immediately I said “Yeah, I’ll never live in something like that.”

Just then, the ranger guy stopped, grabbed my arm, looked me in the eye and said “Never say never.  You have no idea what lies ahead for you and anything is possible.”

I took this as a huge oracle in my life at the time.

So huge that his comment alone burned away any doubt I had in my mind that Hansel and I could live the life we spent hours upon hours dreaming about.

A year later Hansel and I were packing up our Geo Tracker that had over 165,000 miles on it and driving across the ol’ US of A to start a new life.  And here’s the thing—we had a HUGE list of obstacles we encountered again and again between that walk with the ranger in Sedona and the day we stepped foot into our new apartment in sunny Phoenix, Arizona.

One of the biggest obstacle being money.

But I see now that it all came together so perfectly and gracefully.

Because we refused to believe in never.

Well, I was just sitting here blog surfing when I came across this blog that was giving something away.  Everyone was encouraged to leave a comment in hope to win–and I was really saddened by the comments that were left.  Woman after woman wishing they could be the one to win–and stating how they could never afford this product because A,B, and/or C.

The word itself makes me sick.

Since my moment with Sedona ranger guy I’ve totally abolished that word from my own vocabulary.  And in doing so I took back my power as an individual.

Reading those comments felt like each woman was hemorrhaging their power.

And over what?  A product?

Yeah, I know it sounds just as simple and harmless as seeing a mansion in Sedona and blurting out I’ll never live there–but honestly–words are heavy.  They hold weight.  Especially when you write them out and declare them in some fashion as such.

I get it though, the real truth about that give-away is NOT that those women could never afford that product–it’s simply that they really don’t value it enough to pay the full price.  (That happens all the time online.)

But if we’re quick to leak our power out to things that don’t really matter to us as much–how much power are we leaking over the things that do matter?

How many times are you looking at your own dreams and saying never this or never that?

I want to be the Sedona ranger guy and grab you by the arm and tell you to stop it.

He was so right.  So very right.  I had no idea what was waiting ahead for me.  I had no idea that I would have the life I have now—and that my dreams would become realities–and sprout new dreams.

I just had to stop thinking never–and start thinking
Maybe?
Why not?
How?