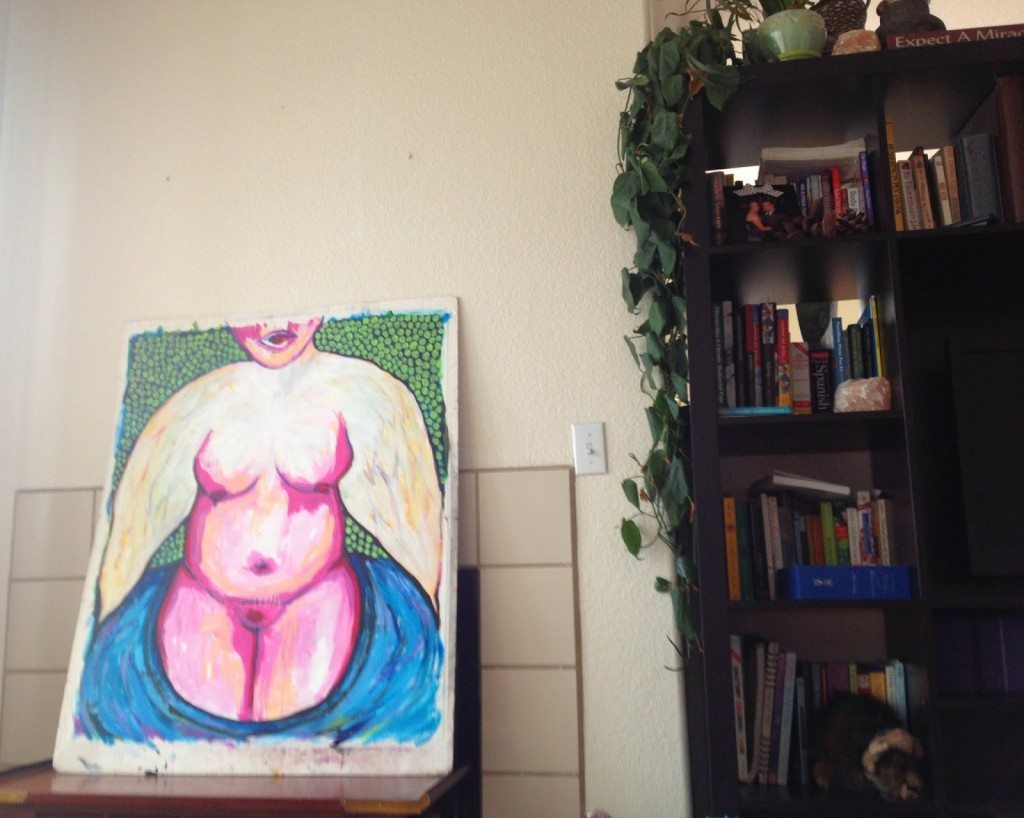 As you know, my studio is a disaster now-a-days.  It seems my pursuit to simplify needs to go through a major upheaval of sorts before anything–but that didn’t stop me from painting FEARLESS this past Friday.

I couldn’t sleep and instead of pacing the floors or boring myself with late night television I pulled out a large piece of vellum bristol, my brushes, some paint, and set up in the living room.

My intention was to explore my body issues that I’m dealing with.

I gained a lot of weight with my pregnancy, and since the birth of Phoenix over 16 months ago it’s not a struggle to lose it–I just haven’t lost it.

I eat well.  I exercise moderately.  (I’ll be honest).

But most of all,  I’ve just navigated through the most stress I’ve ever experienced my whole entire life in these past 16 months–and honestly, I’m still swimming in it.

On top of being a new Mom–I’ve felt more like a single Mom.  A single Mom that has to run a business, take care of a home, a child, and her husband with next to zero help.

Some nights I collapse on the couch and comfort myself by writing down how strong I am to do all that I do.  Some nights it’s hard to not feel defeated–just because exhaustion has a funny way of tricking you.

Though, it’s my body that at times causes me the most suffering.

I was playing with Phoenix just recently in front of the mirrored door in our bedroom, when I caught a glimpse of how large my belly is resting over my pants.  I had to force back the tears and try to reverse my thoughts of shame into little pulses of love.  It was hard to direct those pulses of love to my belly–so I just poured it over Phoenix instead.

A couple days later a dear friend of mine, who also happens to be an incredible body and energy worker, came over to give me a 90 minute session.  She set up her massage table in the living room while I undressed.  As she so lovingly kneaded the effects of stress has had on my body away, I told her how hard I get on myself for being so fat.

My dear friend stopped what she was doing and looked at me and said “Connie, your body knows what you are going through.  It understands and it’s been taking care of you.”

That was the turning point for me, you see.

That’s where I realized that I’ve been neglecting my dear body, not by abusing it–but by completely ignoring it and thinking so hateful to it at times.  That’s why I had to pick up the paintbrush.  That’s why I had to allow my hands to draw the belly and breasts that I usually are a shame of and keep trying to pretend are not there.

Most of all, I had to connect again with this great wisdom–the wisdom of my body.

So as I layered pinks and magentas and mixed in titanium white next to a soft lamp and the snoring of my dog Nyla, I allowed the tears to fall and for my hands to tremble just a bit.

The woman that began to appear in my painting had wings instead of arms and a heart so bright that it’s illumination glows through her skin.  She’s naked and vulnerable and scarred from a child birth that didn’t go as planned.