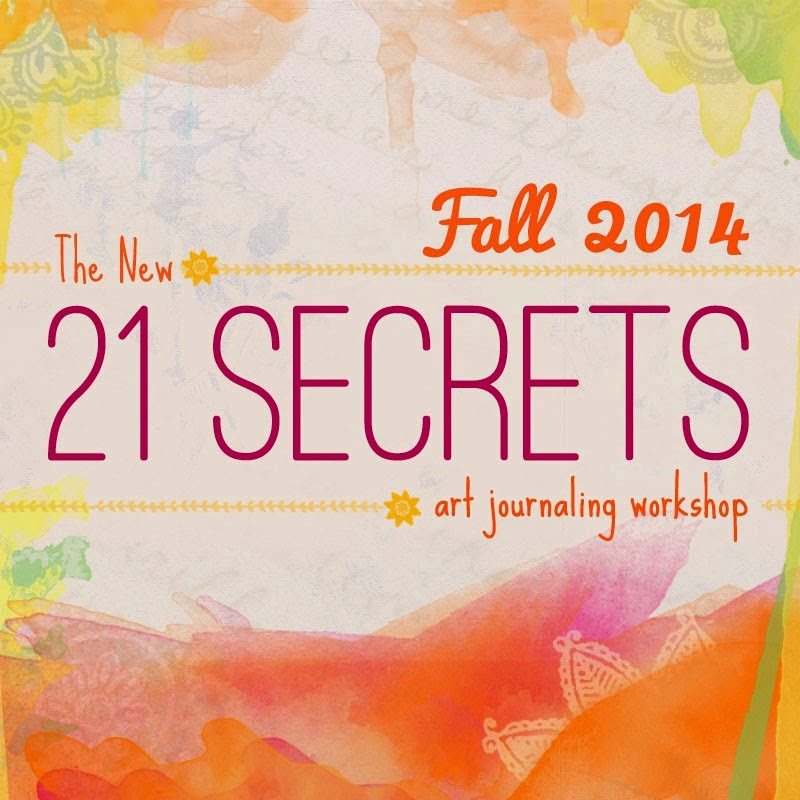 Tomorrow on Dirty Footprints Studio we begin a weekly Friday series that will introduce you each week to the very talented and heart-centered teachers of 21 SECRETS Fall.

This was one of the most hardest and easiest decisions I have ever made professionally.

21 SECRETS is my baby.  For four years it had become a huge part of my life as I worked hard to build it into something with great heart and value.

But last year, I came to a point where I knew something major had to change.

I spent almost a year reflecting, journaling, and praying about what I should do.

The first thing I knew that had to happen was that I needed more clarity around why I was hosting 21 SECRETS and what its purpose and mission was in the world.

It’s no secret (pun intended) that the internet is flooded with art journaling workshops—many that use the same model I started in 2010 with 21 SECRETS.  And I feel that this is actually a good thing.  A really good thing.

Art journaling is a catalyst for healing.  On top of that, artists need more opportunities and venues to share their gifts and their voice  and most of all to collaborate with one another.  I celebrate all the brave artists that offer their heart and soul in an online workshop.  It’s not as easy as it looks.

But at the same time, it’s very important to me as an artist that the work I stand behind be supported by clarity of purpose and purity of intent.

So a mission for 21 SECRETS started to surface — a set of principles that 21 SECRETS would represent and ideals that I and the teachers of 21 SECRETS could work towards together.

It might not seem like much, but this mission shifted everything.  For example, last year, when I invited teachers to join 21 SECRETS I gave them my mission and asked that they would only say yes if they felt in alignment with what 21 SECRETS is about.  To my surprise, it was the first year I received the most rejections ever.

Though ironically, I never felt so good about a no before.

It told me I was onto something and that those yes’s that were coming in were from people that believed in the same heart centered, generous approach to teaching and creativity that I wanted 21 SECRETS to represent.

This mission also shifted things within my own heart.  I started to think that maybe I couldn’t do this alone anymore.  That if I was to truly nourish this mission over the years to come, I would need support and fresh perspectives.

By this time I had already hired a designer to help with all the graphic stuff and then shortly after I hired an assistant to take care of  the administrative and customer service.  But the support I was beginning to yearn for was on the creative end.  I wanted someone that could help care for 21 SECRETS the same way I do, so that this mission could have more room to breathe and grow into new things.

This is how 21 SECRETS LIVE! took flight.  I could not have done it without the support and love from my co-hosts Lisa Wilson and Hali Karla.  They not only hosted many of the 21 SECRETS LIVE! Spreecasts, but they did hours and hours of behind the scenes work to support the workshop and each member’s experience as a whole.

It was  when 21 SECRETS LIVE! first went on sale, that I was feeling truly at a tipping point.  I needed  someone to take over 21 SECRETS — but could I really do that?  Could I just hand over the creative direction to someone else?

All these  fears and insecurities bubbled up from this idea alone.  Not just worries that the other person may not do a good job — but actual worries that maybe since I started 21 SECRETS in the first place I should be doing it all by myself.

Kind of silly, don’t you think?

But I think it’s something many of us artists struggle with.  We look at our art and our projects as our babies.  How could anyone else love and care for them the way mama does?

But that’s the thing.  Our creative projects are babies — and some of these babies need a small family or maybe a village for them to fully mature and grow into something special.

I don’t feel 21 SECRETS needs a village, at least not now, but a small little family is kind of nice.

I was thinking about this and actually running up the mountain by my home when I heard very clearly in my heart to ask Hali Karla.  That Hali is the right woman to help with this work.  That she was doing such amazing work with her Spectrum offering, I knew she would be brilliant at working with 21 SECRETS.

Once I literally arrived at the top of the mountain I called Hali on my cell phone and asked her to take some time and think about it, but I really wanted her to be the new 21 SECRETS Creative Director — all the cells in my body were saying she would be the perfect fit.

Since then I can’t believe how great it is to work on 21 SECRETS together! We have meetings to discuss everything from how the mission can best be expressed in new offerings for next year to the reasons why to invite certain artists to just silly things happening in our lives!

Hali loves to do a lot of the things I dreaded about this position and I can’t believe how much more energized and excited I feel about sharing art journaling with others because I have a partner to brainstorm and collaborate with.

Plus, one of the things we both feel very strongly about is growing 21 SECRETS at a very organic and sustainable pace.  Just because I have more space and time now that Hali is aboard, I’ve been very mindful not to just fill it full of tasks and to-do’s.

I want the mission of 21 SECRETS to lead the way.  I want things to happen when the timing is right and the inspiration is calling.

And what matters most is that we always remember the work we do as artists makes a huge impact on  people’s lives no matter how big or small your offering might feel to you.

From the bottom of my heart I feel moved to say thank you to  all the teachers that have been a part of 21 SECRETS through these five years and especially thank you to all the members who have supported our gifts and shared their own radiant light with us as well.

I and Hali look forward to bringing more magic and creativity your way!!!

Above is a sweet little chat Hali invited me to do with her a few months back…we announce her position as creative director in it for the first time and talk about some pretty deep and beautiful stuff!  Check it out and enjoy!!