It Started With Two Pieces Of Paper 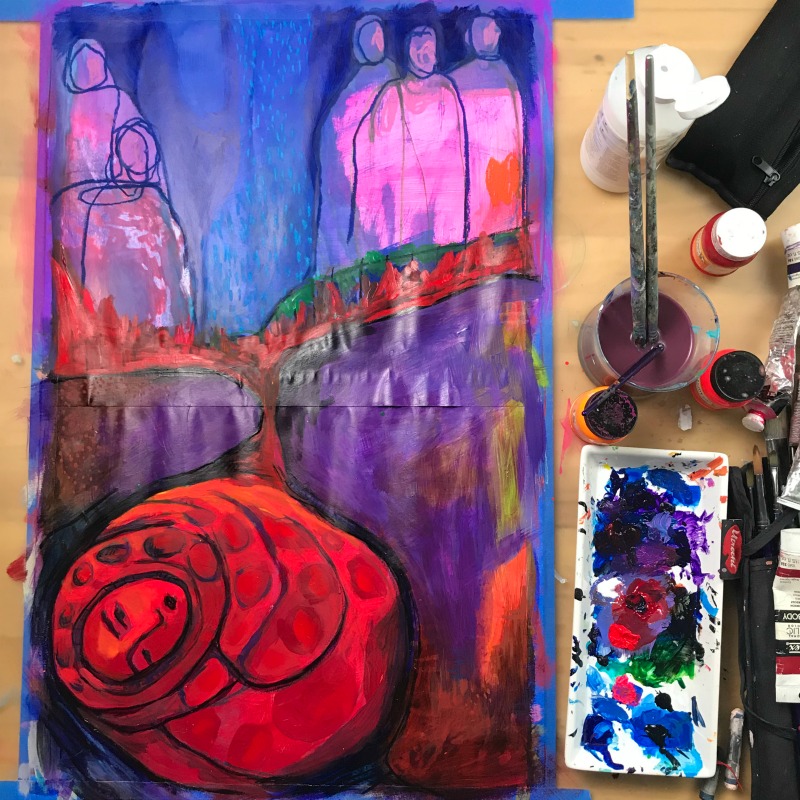 I followed the urge to tape two pieces of mixed-media paper together, place them on my work table, and allow my emotions and deep grief about the Amazon being on fire to lead the way.

What began to unfold was a vision of Gaia as a luscious red ruby completely on fire at the core of the earth. Her hot magma burning, erupting, and crawling its way through the layers of dark soil and sediment — only to meet up with the fires of the Amazon blazing above.

Rising up in the smoke are the ancestors and indigenous people who are losing their precious lives and home. Together, they watch, wait, and pray.

The photo above is as far as I got on this piece. Technically it is not finished. Energetically it is. So I stopped there and left the studio.

Later that evening this ridiculous pull to transfer the image onto a larger piece of canvas lured me back into the studio.

I love to create paint sketches and work in my art journal, but never in a traditional sense where my sketches are preliminary ideas for a much larger canvas or substrate, so this pull to transfer my painting felt a bit foreign.

When I transferred the image, the piece lost a lot of its power and potency. So I began to play around with the composition. I expanded the ruby core and raised the line that represented the crust of the earth. I shifted the color of the sediment between cools and warms about a dozen times.

The piece went from an emotional expression on paper to a forced, awkward mess on canvas. That was enough for one day. I washed my brushes, turned off the lights, and called it a night.

Like clockwork, the next morning I was back in the studio determined to honor this image on canvas.

Though no matter how much I fussed and fidgeted, the painting only did one thing — it provoked more anger and frustration to rise up within me. In the midst of all my angst, Hansel gingerly stepped into the studio and listened quietly as I spoke through tears and snots.

When I ran out of things to say, Hansel left the studio and returned with a kitchen knife that he gently placed in my hand. “Go at it, Connie” he suggested. “Just get it out of your system. Move the energy.”

Holding that knife felt incredibly grounding. The blade was cool to the touch and the weight of it in my hand reminded me of my favorite carving tool I loved to use when I made pottery over a decade ago.

I sat there for awhile examining how I felt and asking the painting “what should I do?”

Then, with a slow and steady hand, I began to carve the ruby, fiery core out of the sediment and laid her sweetly on my lap like a wounded puppy.

That was it. That was all I needed to breathe peacefully again.

Holding that piece of cut canvas in my hand made all of the cells in my body release a long, healing exhale.

Suddenly the great pull to paint on canvas made total sense. The canvas was a catalyst that helped me move some very heavy and fiery emotions I was harboring. But the process itself became a bridge that I needed to cross creatively.

I stood up and went to find Hansel to give him the biggest of hugs ever.

“I know what I need to create,” I told him. “Do you have some time? I’m definitely going to need your help with this one.”