This Is The Part That Is Hard To Explain 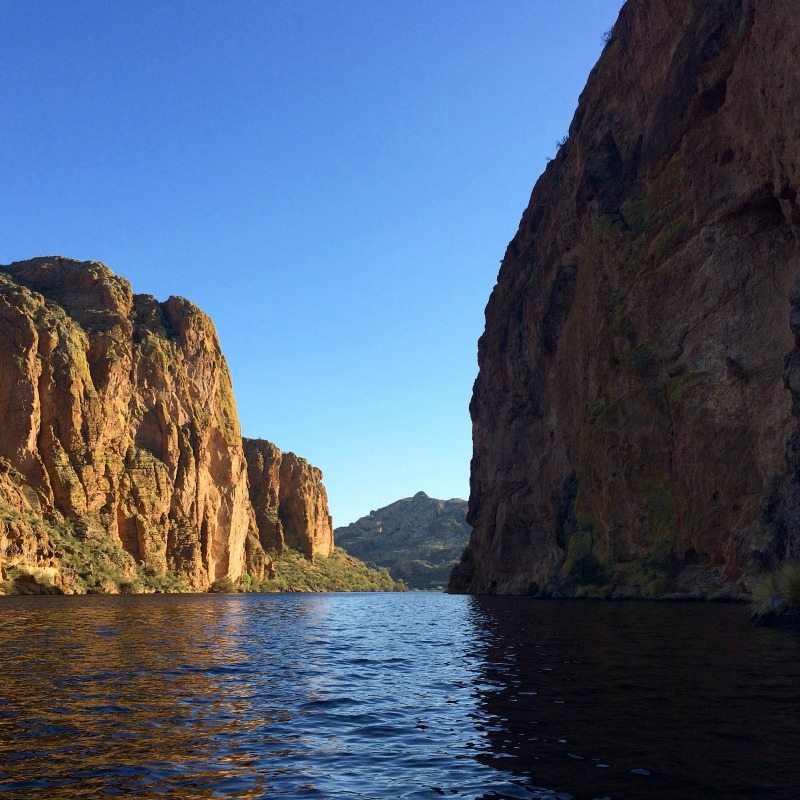 There’s a sporting goods store in our neighborhood that is going out of business and everything in it is discounted and next to dirt cheap.  When Hansel and I heard this, there was only one thing that popped in our minds: kayaks.

The week we purchased them we went out kayaking every single day! I think we burned ourselves out a bit on it — but who would have known that kayaking could be so much freaking fun!

Though the thing is, I don’t approach kayaking like a normal person I expect. To me, I see this sport as a way of truly connecting deeper with my spirit, nature, my family, and most of all my art. 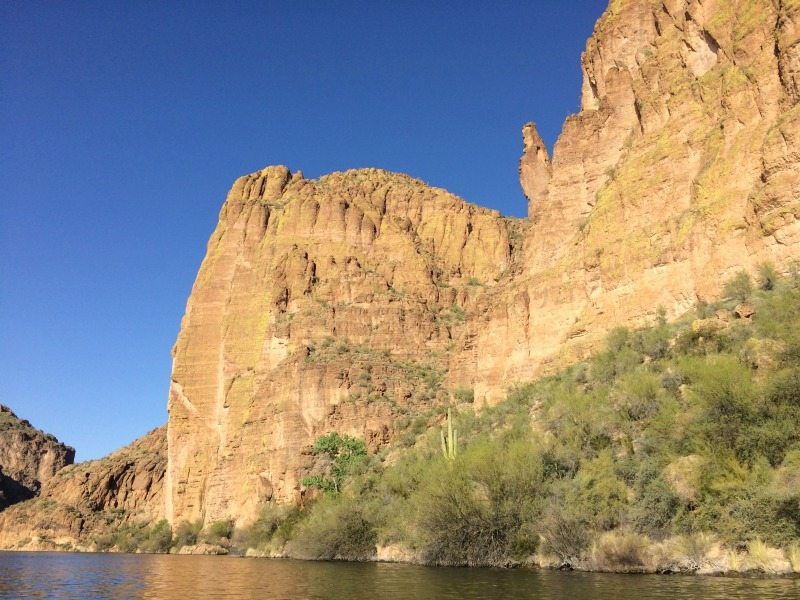 Before my first journey out, I started shuffling a pack of Goddess Cards with the intention to discover what the name of my kayak is.  As I shuffled slowly with my eyes close — imagining my neon green kayak glowing — a card spitted out of the pile and fell face down on the floor.

Well ok, I thought.  That was easy.

When I picked up the card it was Sedna — the Goddess of the Sea.  I immediately Googled her and read quite a few things. Many of the legends vary a tiny bit, but the one thing that they all have in common is that her father cut her fingers off and threw her out of his KAYAK!

Her fingers went on to become the seals, walruses, whales, and other fishes that the Inuit people hunted for sustenance and she, dear Sedna, became the Goddess of the Sea.

So there you go.  My new kayak is Sedna (and Hansel named his Raven). 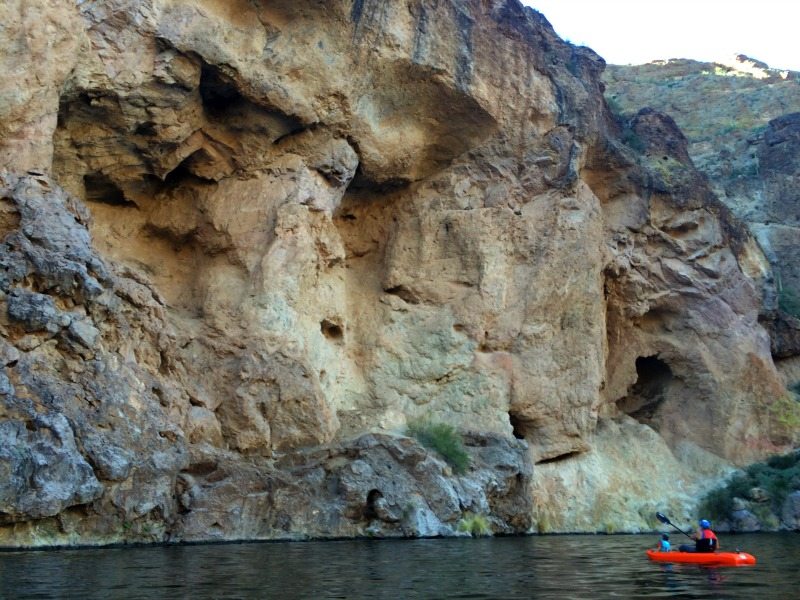 I love that her name is Sedna and that she literally threw herself at me to be seen.  It makes my journeys out so much more magical.

And that’s what kayaking has been to me already.

As I begin to float away from land I allow the repetition of the paddling to become a meditation that takes me deeper into my heart and into a wider perspective of the world around me.  I make it my intention to listen and be aware.  To take everything in as not coincidence and chance — but rather messages and meaning.

I might ask a question or set out on a prayer, but once the feel of my feet on land become only a memory, I slip into a new reality. One that I lived in constantly as a child. One that is as familiar to me as paintbrush in hand. 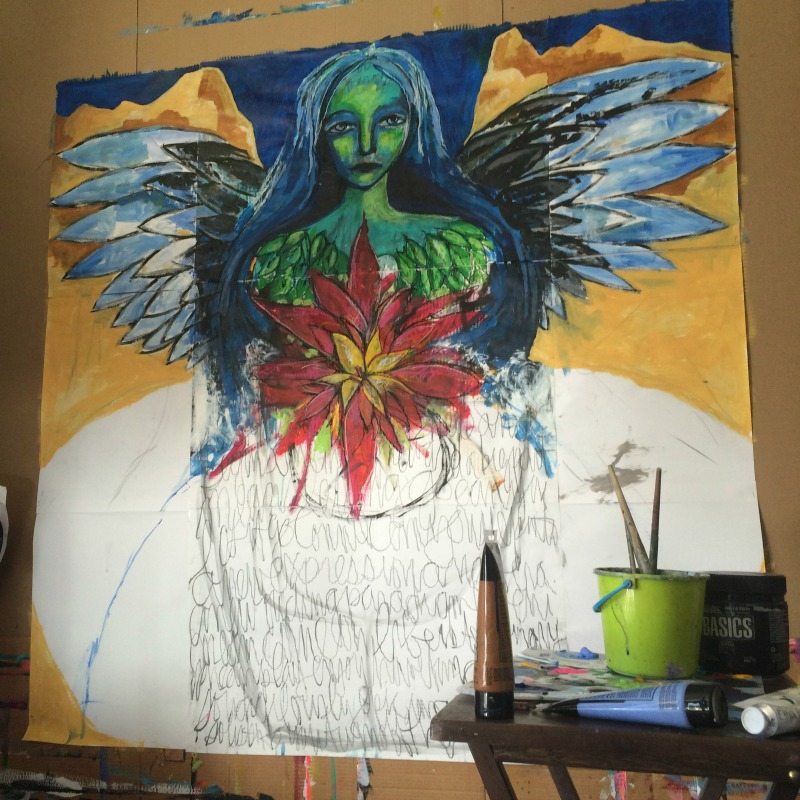 As I shared with you HERE, the last place I was at on my painting was struggling with giving her wings. Once I honored the painting’s wishes, I walked away knowing that what was needed next would be revealed to me.

I went in the studio every morning for days staring at her and fussing a little with her wings.  At one point I began to even paint them black.

But it wasn’t until the journey out on Sedna that you see in the photos above that I clearly heard the next step in my painting.

But I didn’t hear it in words or even see it in imagery.

I felt it.  I felt it like a cold rush of water flowing over me. 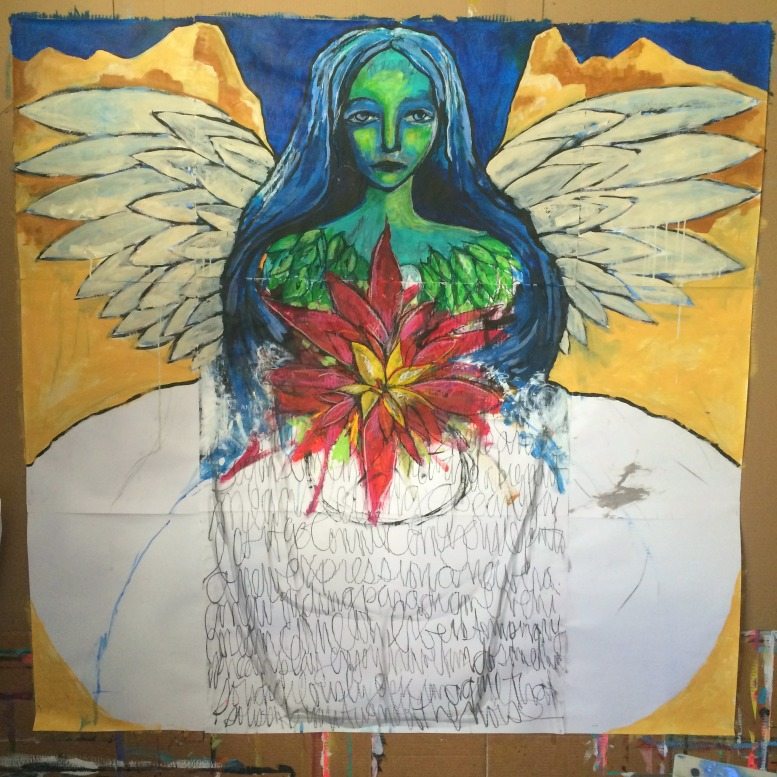 Hansel, Phoenix, and I were the only humans out there in the canyon.  That day we saw rams, a bald eagle, and even though we couldn’t see them — we heard baby bald eagles chirping from their mother’s nest way up high.

That canyon.  That experience of being surrounded by those incredible statues of ancient stone — it spoke to me in ways I couldn’t express, until I stepped into the studio the next morning.

The painting didn’t beg for it — like she did when she needed wings.  Instead this time she waited for me. 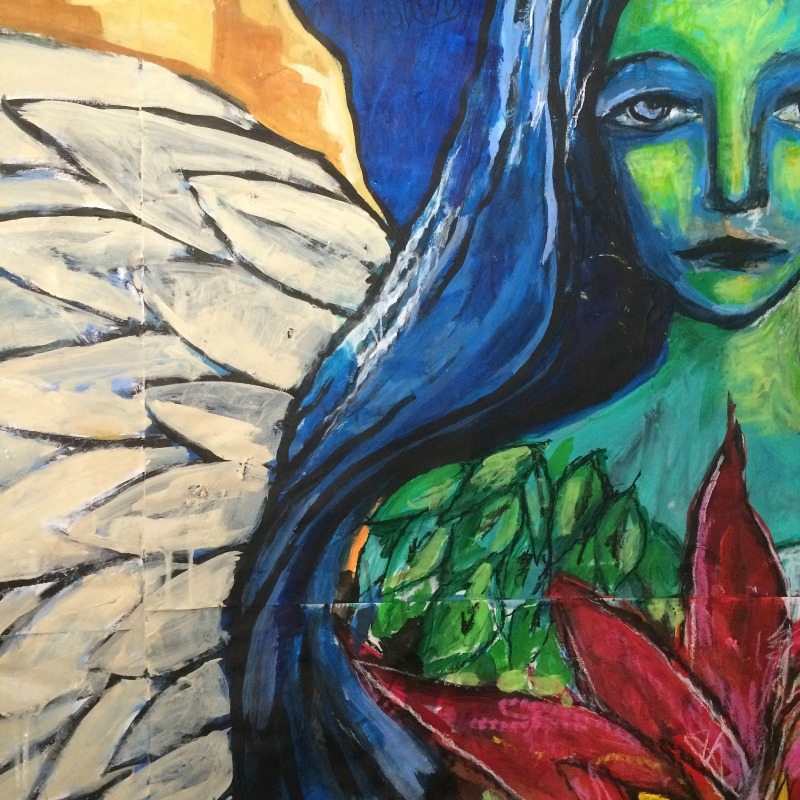 This is the part of FEARLESS® Painting that is hard for me to explain.

Because this is the part where the painting guides me — not only on paper when the paint is still wet, but as I venture and move through the world that I live in. Before there was Sedna parked in our garage I painted long rivers of water coming from her hair.  Before I felt the waves cradling my legs I left space for the canyon to appear.

Sometimes its even impossible for even me to believe.

But there is no better proof than the marks that stand present on the wall in my studio.