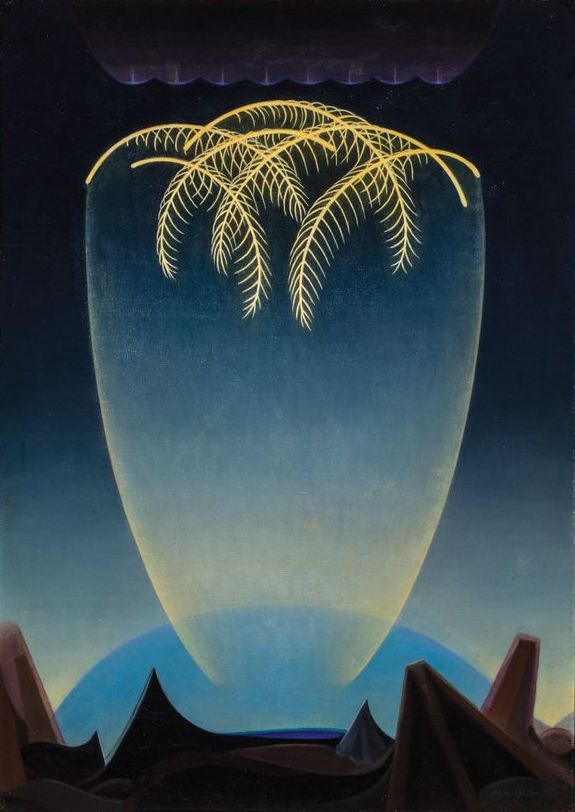 You know about Georgia O’Keeffe, but I’m betting her contemporary, Agnes Pelton, is someone not so familiar?

The two artists knew one another and were among the very few women included in the famous Armory Show at 100 in 1913—an exhibition that introduced the US to pieces by Picasso, Matisse, Gaughain and Van Gogh; a show that changed the way Americans viewed Modern Art and to this day is considered one of the most important art exhibitions in the US.

Six years later Agnes stayed in Taos, New Mexico with the renown art collector Mabel Dodge. It was a milestone that prompted her work to shift from whimsical fantasy to landscapes and realistic portraits.

Though it’s not Agnes’s realism that hangs on the walls in the Desert Transcendentalist exhibition currently at the Phoenix Art Museum, but rather her abstract paintings she created as part of her deep spiritual path.

Just over a decade following the famous show in which the two artists’ work appeared, Georgia went on to became a household name. However, after years of struggling to be taken seriously within the world of Modern Art, Agnes seemed to disappear altogether after making a choice to forge her own artist’s path and say to heck with the art world completely.

At her passing, nearly 60 years ago, her own family—not quite understanding Agnes’s abstracts, let alone her spiritual interests—went through and disposed of much of her work, leaving much of her life and art a mystery.

Now, a resurgence in her art and life’s story is surfacing, one that focuses on her unquenchable thirst for transcendentalist philosophies and “alternative spiritual” practices such as astrology, yoga and meditation.

Walking through this exhibition of paintings crafted with such exquisite technique and sophisticated compositions, one might be surprised to learn that Agnes was shunned from the Modern Art world of her day. Because Agnes’s paintings expressed a personal spirituality, she was viewed as an outsider and a bit naive.

It’s important to realize that Agnes created work in the early- to mid-1900s. Women in the US hand’t even received the right to vote until 1920 and our presumed role in society certainly did not include space for “alternative” ideas or spiritual practices that strayed from the status quo of main-stream Christianity.

Agnes created realism to financially support herself, and was very prolific with her landscapes and portraits. However, her devotion was to her abstracts that were intimately connected to her own personal spiritual practices.

I recently attended a lecture where the scholar Erika Doss explained the split Agnes struggled with, between needing to make art that sold commercially and still having time and space to create art that was more authentic and true to her spirit.

As I sat listening to the lecture, I was immediately back in art school (over twenty years ago). Feverishly, I would paint to the wee hours of the morning in my tiny two-bedroom apartment’s run-down kitchen. I would squeeze every waking minute I could into creating art I knew no local gallery owner or professor would consider good enough or appropriate for a show.

But I had to make this work. I had to. It was the stuff my Soul craved.

Adjacent to my kitchen was my “real” studio. The one filled with pieces that the powers-that-be would smile upon. The one that helped pay the bills, get the grades, and make me look like a good-lil-artist.

Drawn by the spiritual pull of the San Jacinto Mountains and the incredible light that exists in the desert, Agnes escaped to a small cottage in Cathedral City, California where she resided and painted by herself for thirty years before she died at the age of 80. In my mind, I imagined Agnes grew tired of keeping up her good-lil-artist personae.

Throughout her career, Agnes kept detailed journals that, too, reminded me of my own studio logs that I have religiously kept since high school. The same studio log I swear by as an artist and that I insist my students in Painting the Feminine keep as well.

Agnes’s journals included sketches of her paintings, accompanied by her thoughts on specific colors, elements and compositions she chose, as well as pages and pages of personal reflections on her day-to-day life.

A woman in the audience in the lecture hall asked the scholar if she read any of Agnes’s journals and if so, what did she write about in regards to her personal life?

The scholar noted that most of her journal writing involved worrying about how to make ends meet. Paying the bills continually weighed heavily on Agnes’s brilliant mind until the time of her death at age 80.

I left that lecture hall and went straight to the exhibition wondering why now? What is it about our current time and situation that is fostering such recognition and respect for her work? Why now and not during her time? Why is her life and her devotion to art as a spiritual practice resonating so strongly, now?

As I walked through the exhibition for my fifth time, I stopped at all the usual paintings I’d stopped at previously, that made me wonder how she achieved such a gorgeous glow. But this time, I stopped in front of a piece located right around a make-shift wall at a painting that I obviously skimmed over the last four visits. This time I stood there staring as tears began to swell in my eyes.

I leaned over, and right under the title Light Center it stated that this was the very last painting Agnes was working on before she died. It wasn’t finished yet and her pencil marks are still present.

And here I stood in front of it, sixty years later, feeling like I’d known Agnes all my life. This ending of hers was only canvas deep.

As the tears rolled down my face, I realized that this is Painting the Feminine. This is what I try to introduce my students to year after year; that paintings themselves possess a Soul and an energy all their own that weave themselves into the fabric of life. We the artists are the stewards, the weavers, the storytellers and the messengers of this energy that is much, much bigger than ourselves, and certainly more powerful than our paint, our brushes and our masterful techniques.

Agnes was gone years before I was even born, but she was standing there right beside me as tears lightly stained my cheeks. I reached out for her hand and I felt her put hers in mine.

Now is the time for women, like us, to paint honestly.