Years ago I lived by myself in the top of an old house in Cleveland. The biggest room was the kitchen, which stood at the nucleus of my little habitat. I heart that kitchen big-time!! It was huge, and had linoleum floors that sometimes I’d push the furniture out, play some salsa music, and roller blade in circles like it was my own personal rink! But the thing I miss the most about that space was using it for dancing! I’d dance all the time. And in fact, I’ve been dancing for quite awhile, and just been feeling nostalgic of the days that dancing was a big part of my life.

Wednesday, Thursday, Friday, Saturday, and Sunday, I knew where to go to dance. And I don’t mean mainstream-wanna-hook-up-sipping-on-some-kind-of-sexy-cocktail kind of stuff. I mean little places that played underground music and people were serious about dancing. I remember the kind of dancing where it was a release, where you lost pounds of sweat, where people came to dance with one another, because that’s what you did. Not because you wanted it to lead to something else. Not that it didn’t…cause nothing is more powerful then people that can really dance, and are not afraid to. But for years I lived to go dancing. All that other stuff that goes along with it, came second.

I salsa’d my ass like it was on fire. I kept massive pace in the samba. I swung with the swing. I moved for hours with the soul and hip hop from the old brillo pad. I didn’t care, I just wanted to dance. Funny, Hansel and I met over dancing. When we first met, we danced like crazy. I think he was trying to impress me, so he kept up. But we don’t dance as much. I can’t remember the last time. And I’m starting to really miss it.

Well, I still dance in the privacy of my studio. And in my opinion, that counts for something. I recently found these photos from when I danced part of MaDaCol, a modern dance troupe in Cleveland. The piece was called Shared Moments. 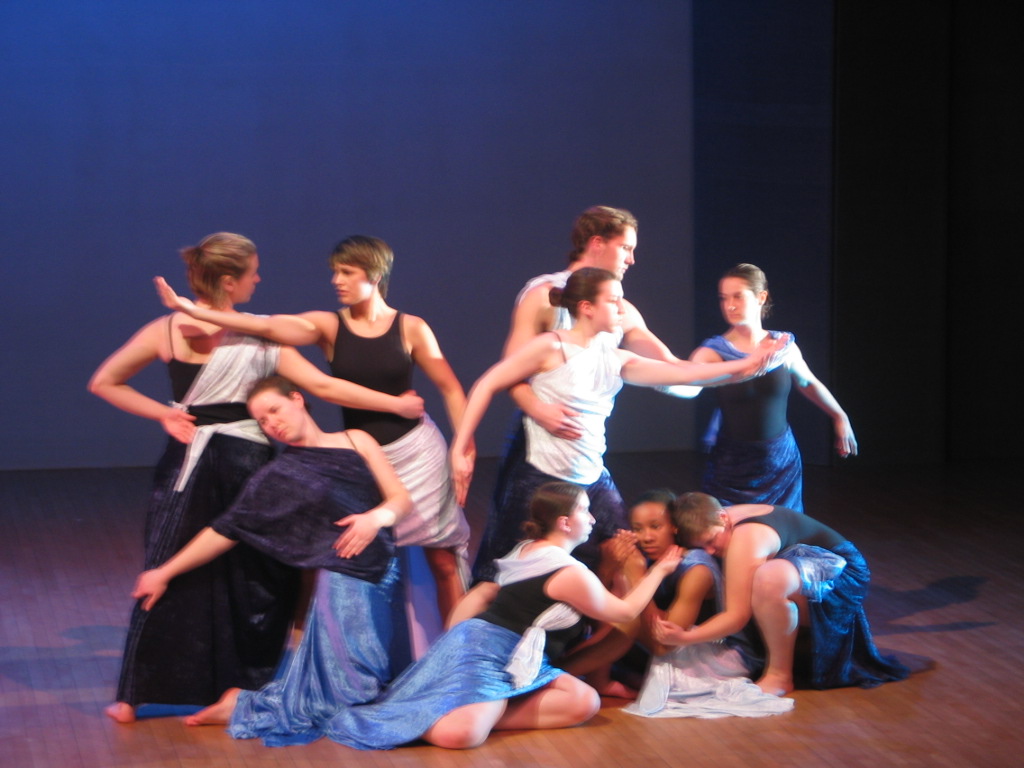 That’s me standing up on the far left with my back to the audience. This is how the piece actually ended–we look like a baroque sculpture. That was the choreographer’s intention, including the reason why she has us draped like a toga party was about to break out any moment. It was a pretty serious piece, but I was just excited to be a part of it. Oh yeah, my best friend Andrea is the chic-ee standing on the far right. 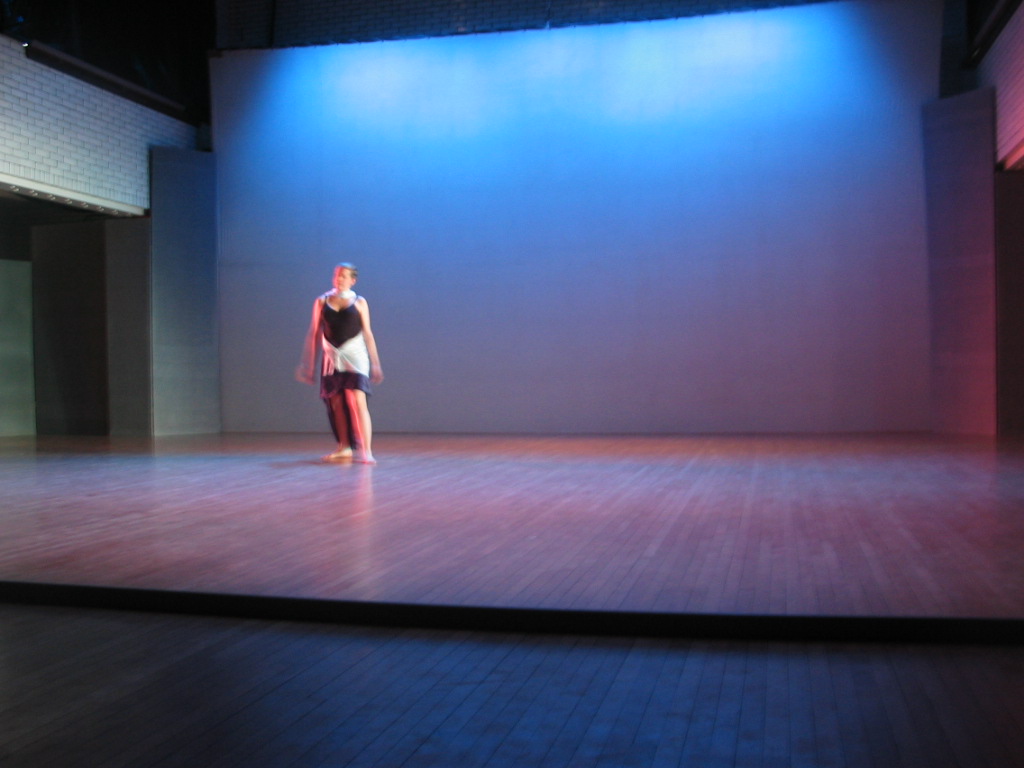 I think that’s me…but I don’t remember much else about what I was about to do. 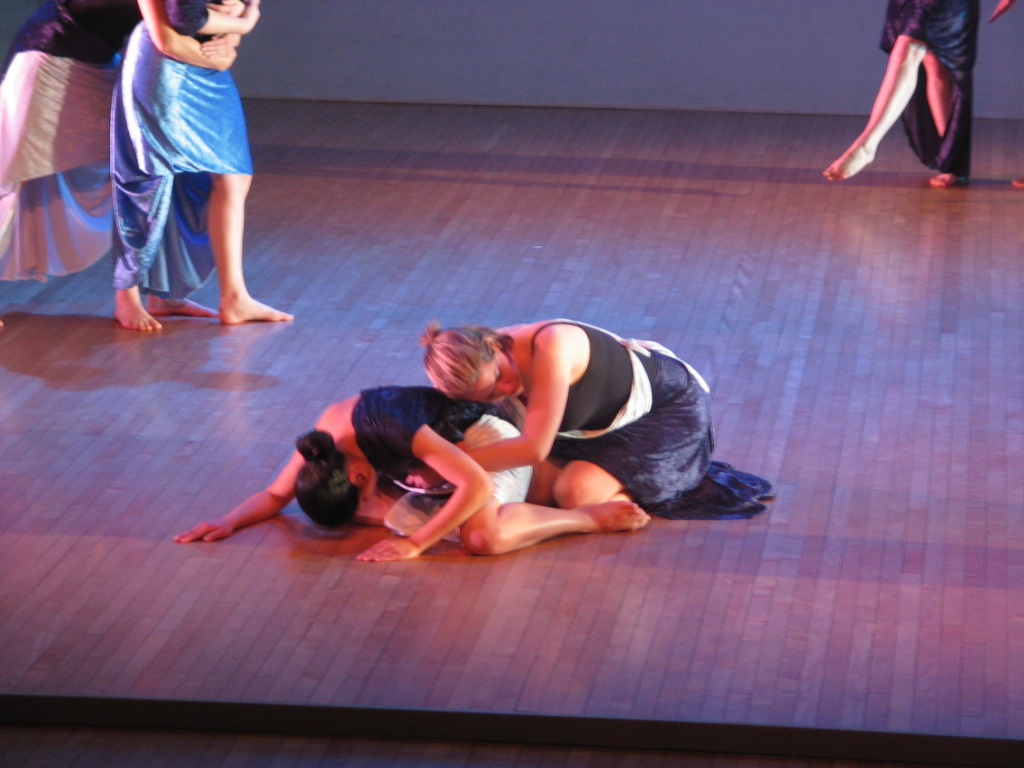 Now this part I do remember, because this was at the very beginning of the piece. We all came out with the lights off and when they came on everyone was in couples spread throughout the floor. We looked like statues that slowly came to life. I was laying there, dead front. I just remember looking up and only seeing all these glowing eyes looking back at me. It was exhilarating. Because for the first time, dance was merging with art. It was great. That was about four years ago.

The thing is, that ever since I was a kid I wanted to dance on stage. Here was my chance. I didn’t make any big bucks, no popular bands have asked me to dance in their videos, but I did something that my heart had wanted to do. I took a risk, I put in the work, I crossed another thing off my “bucket list”.