This is exciting stuff! I started a major studio cleaning today. It began to get a little out of control the past couple months, while I was busy juggling all the stress and deadlines from school. When I could squeeze out the energy to create, I’d just leave things mostly where they landed afterwards. After awhile, things started to overlap each other like paint on a Pollock painting. Yeah, that’s how my studio started to look. But today I decided to get organized! A friend of mine gave me a dresser, so Hansel and I moved a lot of our clothes out of tupperware bins and now into an actual dresser. So I’m using those bins to organize my supplies. Brilliant!

Under all my creative rubble was my beloved art journal that I haven’t picked up in a few weeks. Ahhhh. It’s like bumping into an old friend. So how could I resist? Now that my work table was cleared I started taking stuff I piled up, and creating a couple new entries in my journal. I also went back and worked on other entries. I’ve been doing that alot this weekend. Too bad you couldn’t do that with the rest of your life…you know, go back and tweak a few things!

So here, feel honored. I’m going to let you peak into my journal! 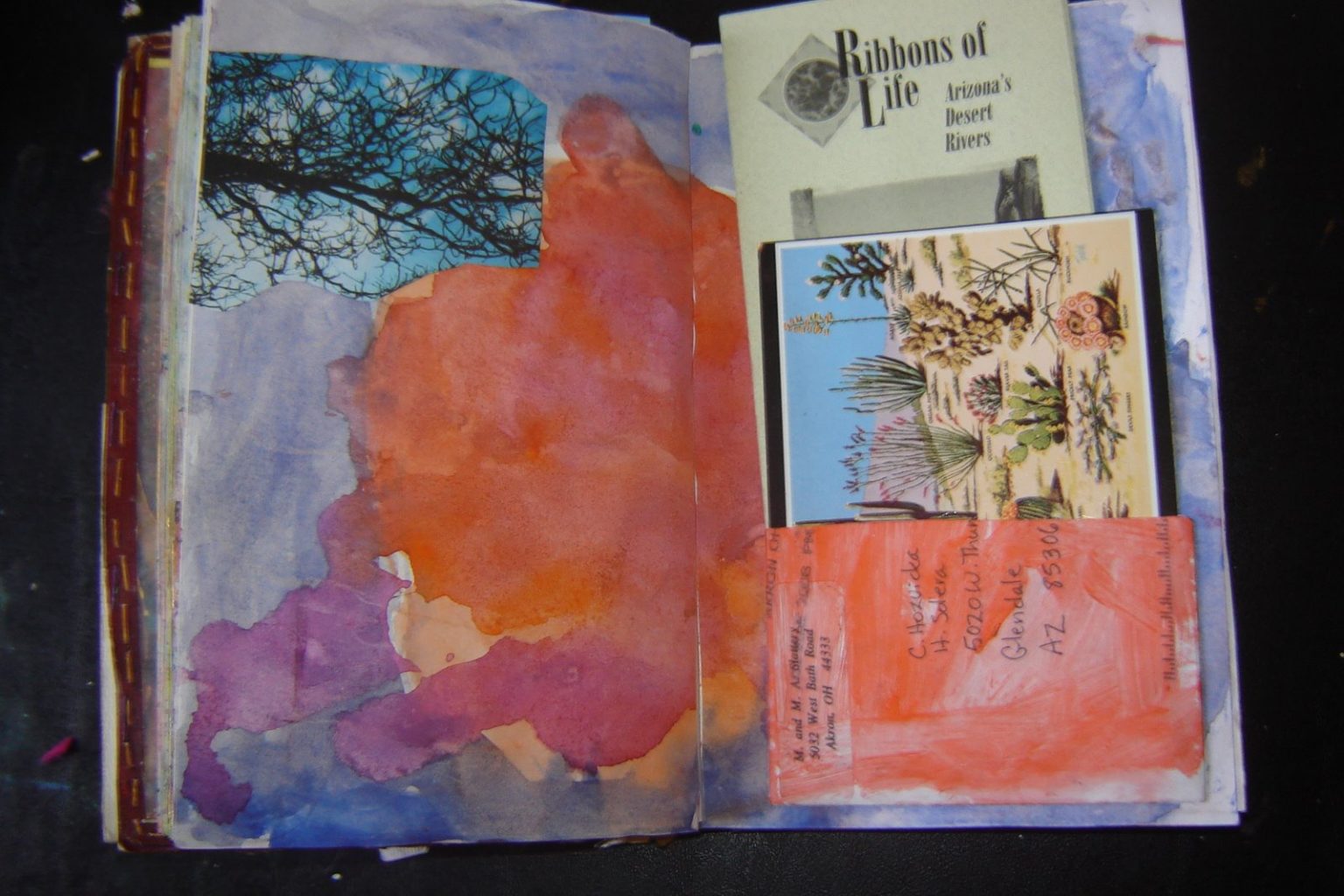 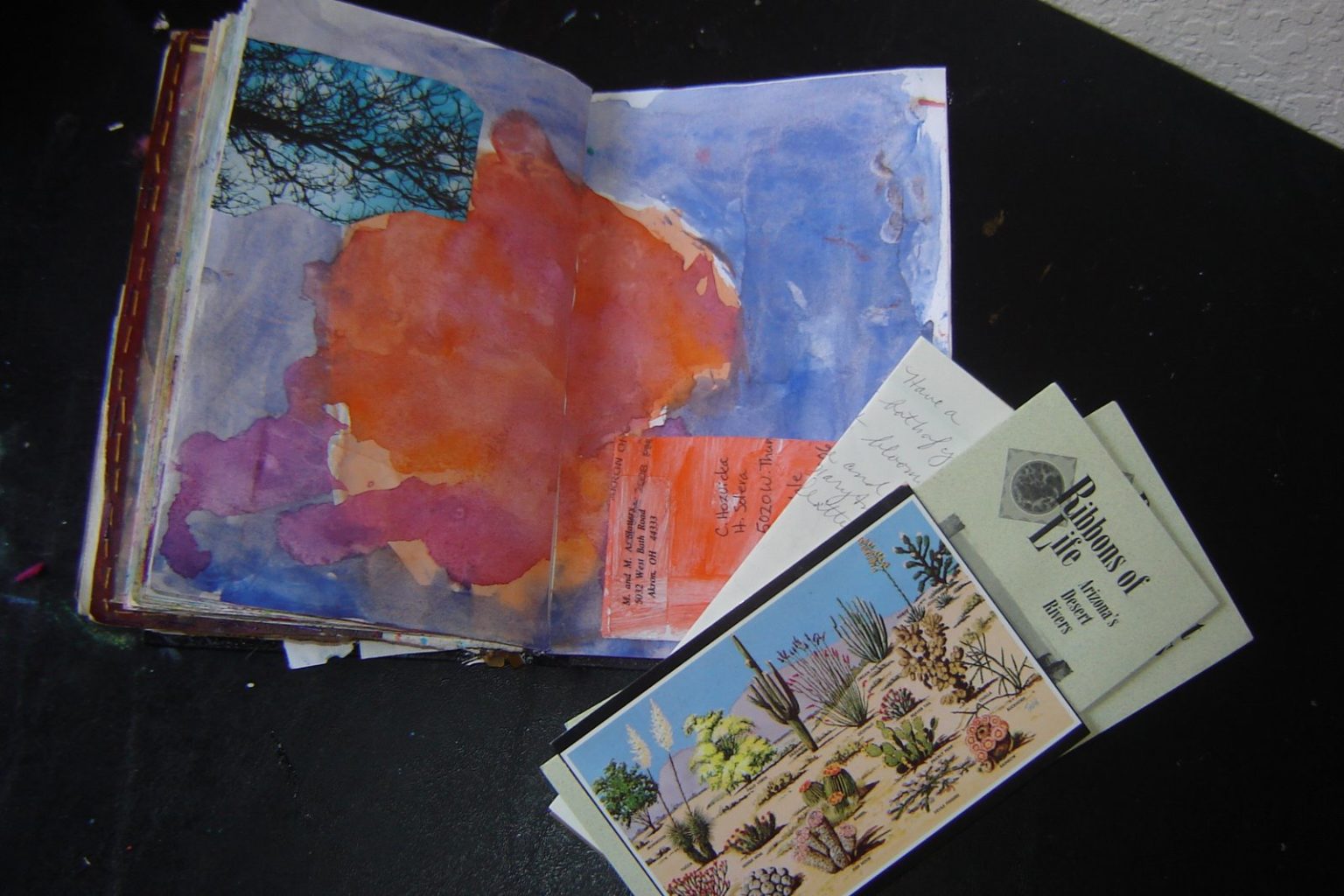 This entry was actually created using a watercolor painting that one of my students was about to throw away. I have tons of those. These absolutely beautiful pieces, but they just don’t get it…yet. I had a letter from some friends sitting in my pile that I want to keep–but where, right? They sent me a sweet letter and a cool postcard and pamphlets on desert plants, so I used the envelope and made a little pocket to keep the stuff in my journal. Plus, the painting needed a little somethin-somethin in the left corner so I collaged a piece I cut out from the an old Jack Johnson cd. 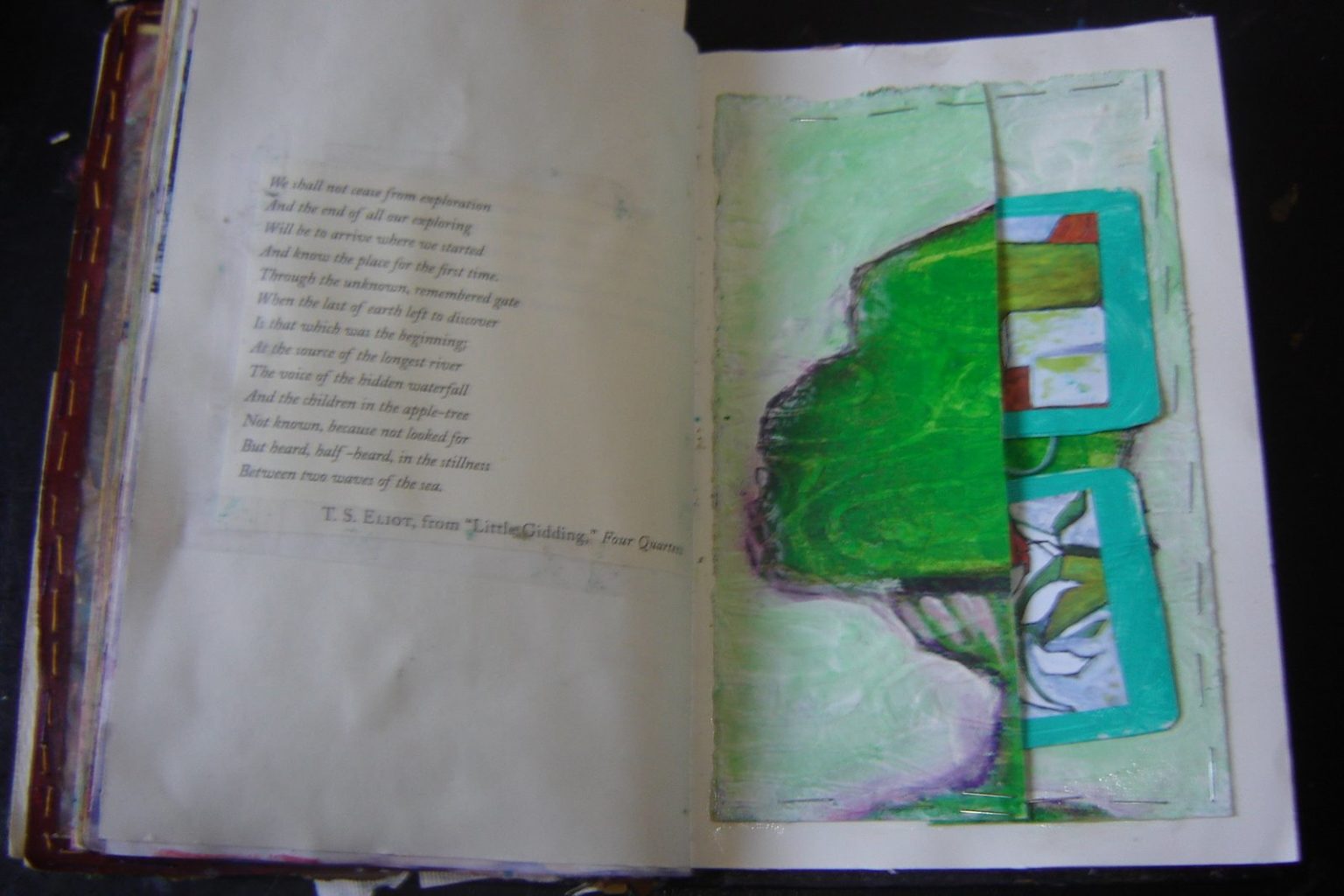 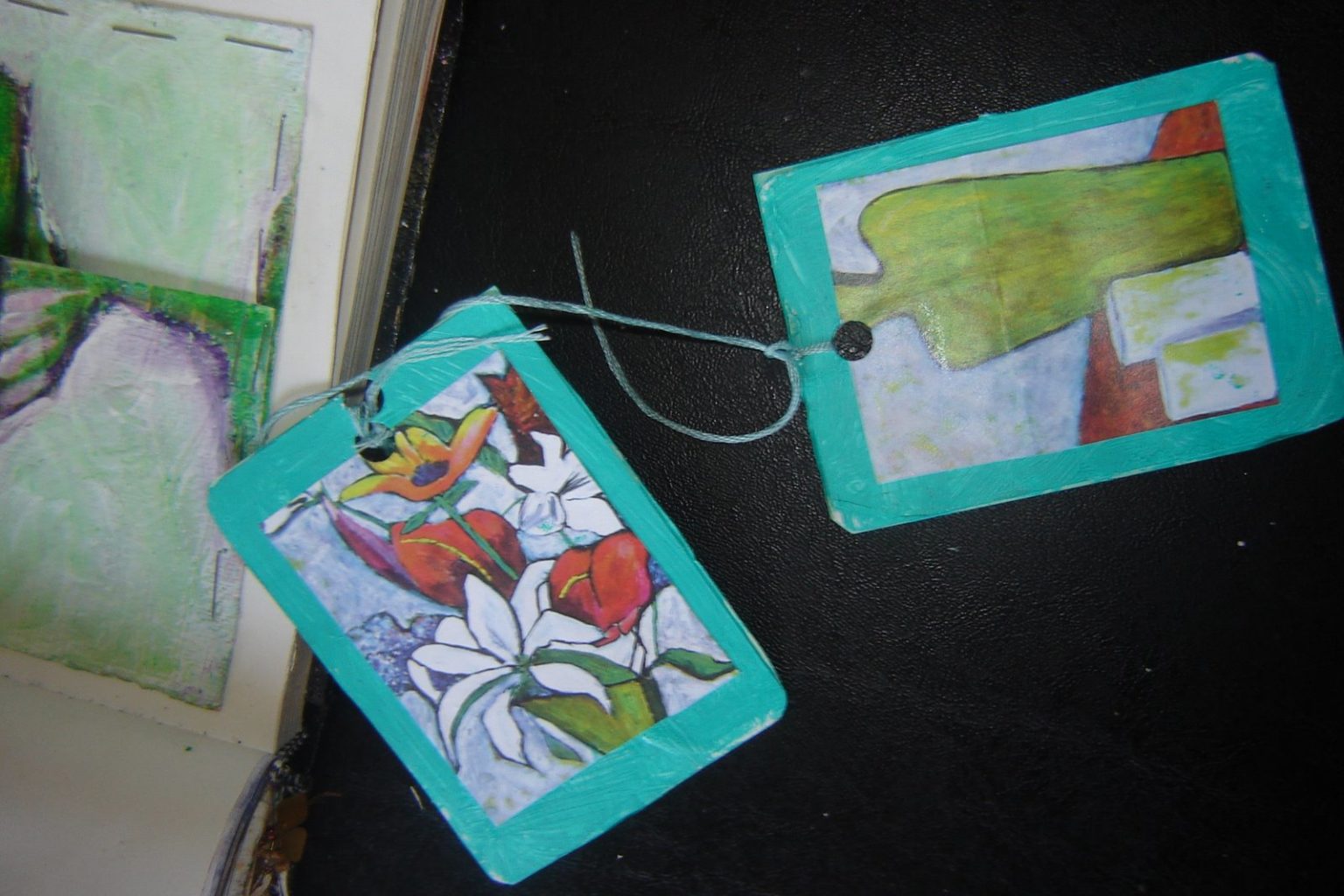 So after making the first pocket, I had to make a second! In my next entry I cut one of my little paintings in half and turned it into a pocket! Pretty simple. I also found this cool little artist statement from this artist that had a show in town recently. I used her painting on the statement to create the two little cards that I tied together and place in my pocket. Just a little somethin-somethin….you know what I’m sayin’! Last, I have a book that I cut stuff out of when I want to add some random text. I thumbed through it and found this excerpt that I included on the left. It is from T.S. Elliot’s “Little Gidding” and it says:

Will be to arrive where we started
And know the place for the first time.
Through the unknown, remembered gate
When the last of earth left to discover
Is that which was the beginning;
At the source of the longest river
The voice of the hidden waterfall

And the children in the apple-tree
Not known, because not looked for
But heard, half-heard, in stillness

Between two waves of the sea. 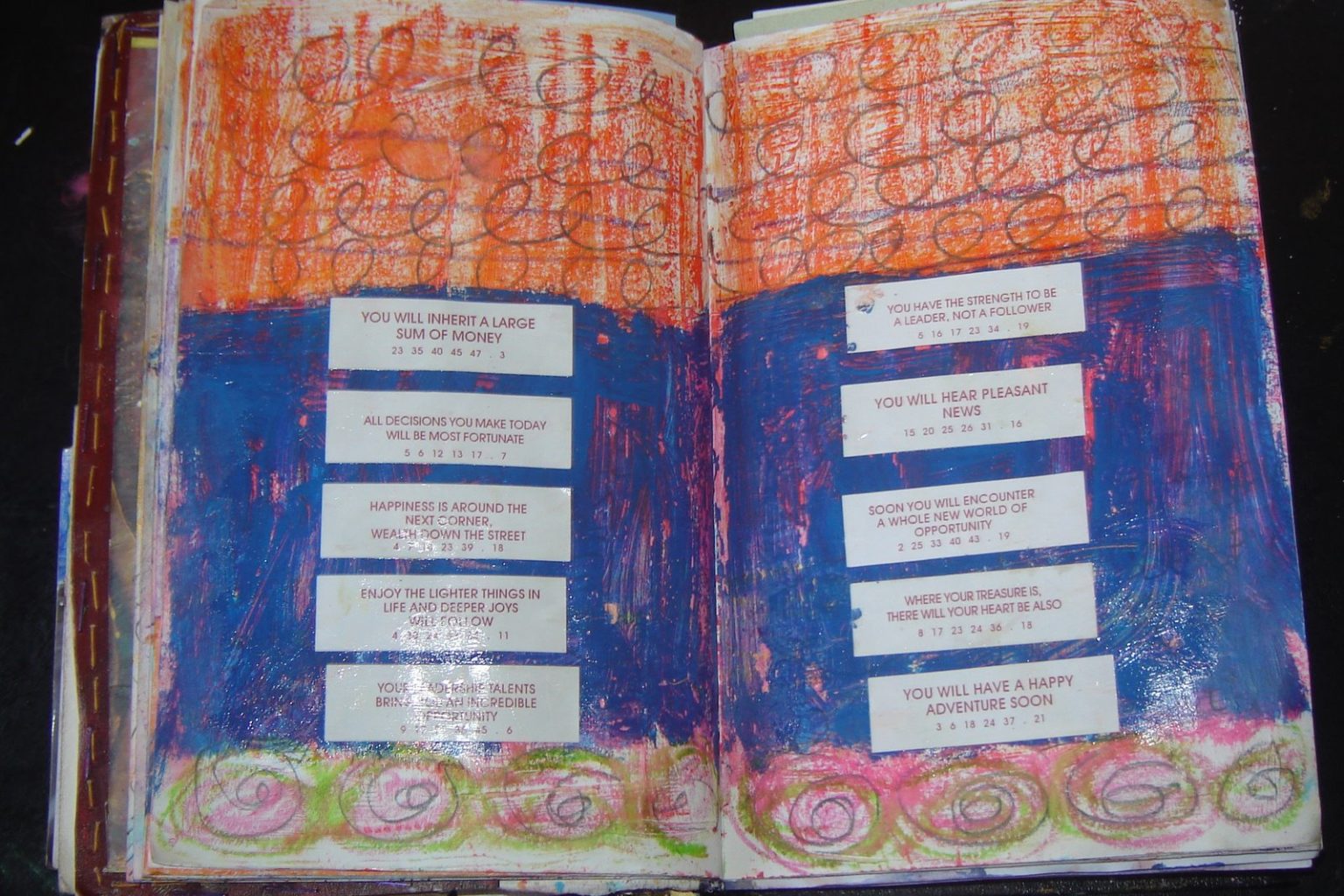 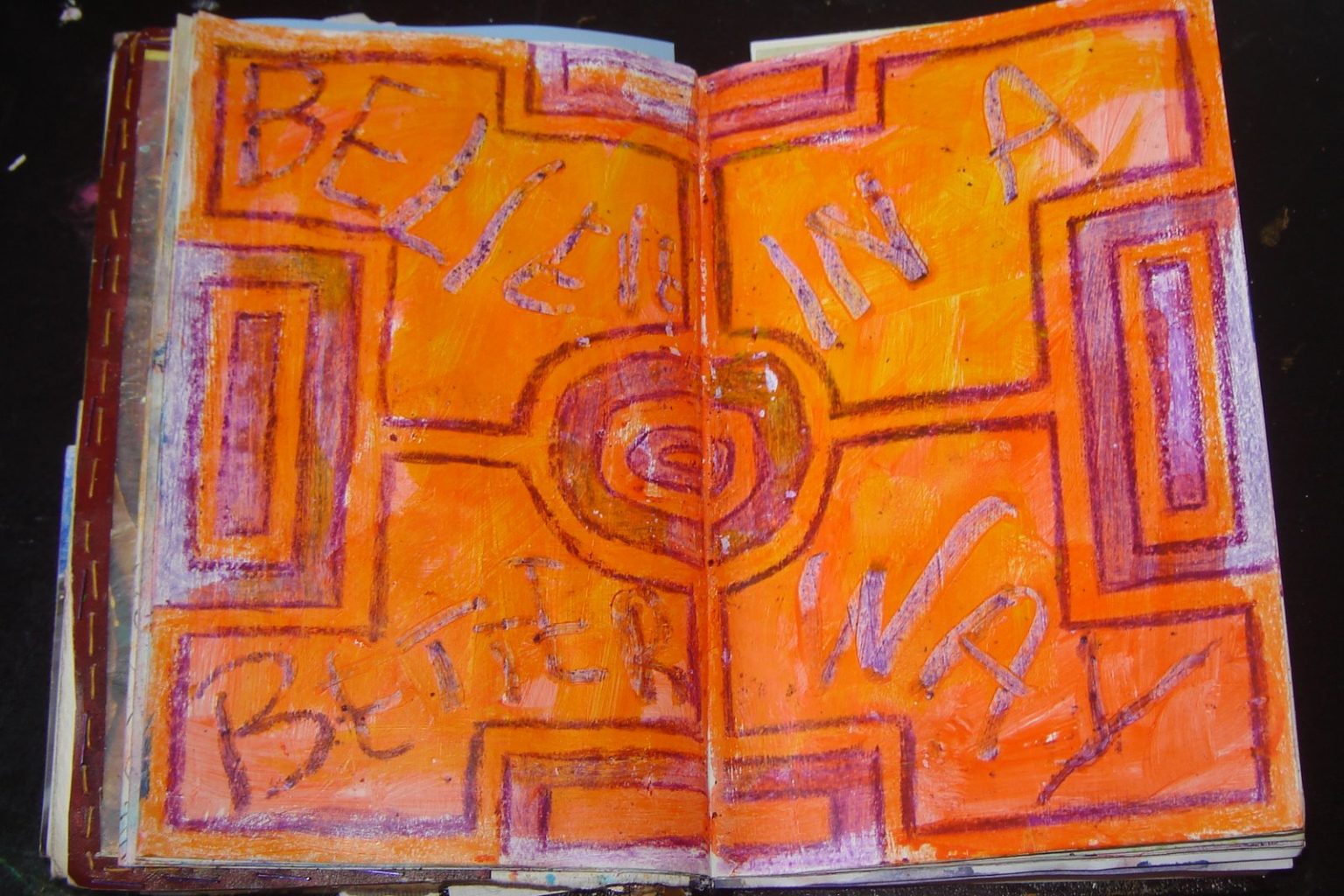 These are two entries from my journal that I went back and messed with. First I should say, I love collections! I’m not as bad as I used to be. When I lived by myself I had tons of collections! Now I try to keep them a bit more simple. One thing I love to collect is fortune cookie fortunes. So in the first entry I added some fortunes. For the next entry, this one has always been unfinished. My main intentions when I started it months and months ago was to create a mandala. But, that idea faded. So today I just painted some orange and yellow over it and scribbled ‘Believe in a better way”–because that was the song playing when I did it. Not too deep–but could be!
So, hurray for art journals! Hurray for clean studios and little collections of stuff! Hurray for creativity and all the beautiful things it does to our souls! Hurray for art! Hurray for art!
Peace & Love.