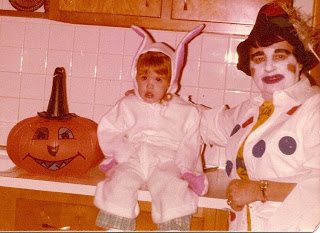 Photo of my Grandma and I–Halloween 1977!! Isn’t it sweet?!?!
It’s that time of month my friends!!! The time of month that I stand up proud as a member of the Etsy Bloggers Team!!! As a member, each month you are required to participate in the blog carnival and applaud the month’s feature Artist. This month’s blog carnival is all about Halloween!
WARNING!! This is for all individuals who might be out-of-their-mind and contemplating the idea of working in a haunted house this season. Not a good idea. Yes, it may seem like fun and frills….and a horrifically great time…but from my own experience of working TWO days in one, before I was fired (I’ll get to that)….you will see that its not all tricks and treats!!
Years ago, when I was a wee one in high school, the Commercial Art program that I was in was working at a haunted house for a fundraiser. I can’t remember the name of the haunted house…but it was located on fair grounds and included a haunted barn and possibly a school house too. Whatever. The thing is…the first day, my best friend Mary and I were so excited. She was going to be the bride of dracula…and I was to be dracula. Our make-up and costumes were pretty cool, and what we were required to do seemed pretty simple. Mary sat on a chair behind the coffin that I laid in. As people walked into the room where we were at, she would give me a cue right as they passed the coffin and I would sit up and scare them. Let me tell you…people are not nice. That’s the first thing someone should know if they are considering this venture. Yes, there were many people who got a scare from this and they made the job a bit rewarding and fun…but there are so many other bozos that will scream mean things back in your face on purpose…there are people that will even spit in your face. Not out of fear, out of pure being mean. Then—probably the thing I remember most is the four hours of sit-ups one must do if they are dracula in a coffin!!! As the evening began I sat up every time someone walked into the room….then it turned into every other person…then maybe every five people….then by the end of the night, they were lucky if they got a faint “boo” from the inside of the coffin!
So, the next day, with abs of steal, I returned to my job of horror. This time I made a big stink to not do that again…and instead…they dressed me in a raggedy, torn up, full of blood dress, put me in a room full of nothing but hay and a non-stop strobe light, and gave me a REAL hatchet and told me to run after people–but make sure I don’t cut them with the REAL hatchet. I guess I was suppose to be one of the “children of the corn”.
Now, we’re talking late October in Ohio…and I’m out in a barn in the middle of a fair grounds, wearing nothing but a torn up dress, completely alone, becoming insane by the maddening strobe lights, and told to not hurt anyone with my REAL hatchet as I am to chase them around.
Yes, I’m repeating myself…but c’mon….it’s crazy, don’t you think? Is this kind of stuff still permitted?
Well, this is not a good situation for me…and truthfully, is it for anyone? But after two hours of freezing cold strobe light madness….and chasing people, I swung the hatchet the wrong way and cut the security guard’s ear. Yep. This horror had real blood and everything. I didn’t even realize I did it because I was so insane from the strobe lights and the hay and the surreal situation.
Well, that was the end of that. I have never been to a haunted house since!
Peace & Love.