How I Begun To Build A Dream 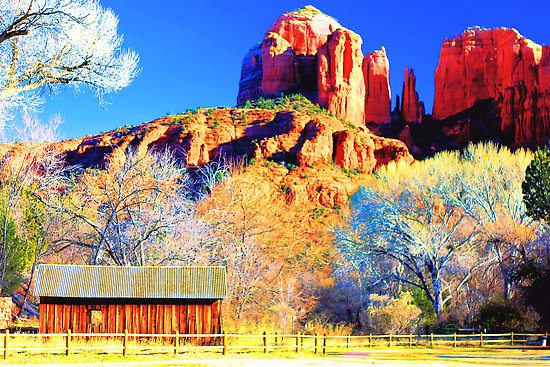 I’m going to tell ya a funny story.  Well, kind of funny.  It’s about how my Total Alignment Sedona retreat (which will be happening a week from today) came about!

You see, this is my BIG dream.  This is the core–the juice–the real stuff I want to be doing in my life–holding retreats for FEARLESS™ Painters in beautiful places–where we can paint, be adventurous, and share a magical time together.  And for a long time I was telling my FEARLESS™ Painters that I planned to host my first retreat in my beloved city of Sedona, Arizona–where magic is embedded deep in the red rocks already.

And last December came and I decided yep–I’m gonna do it.

Now, way back in 2009 I hosted The Creative Dig in Cleveland, Ohio.  But that was a one day gig–and I held it at my friend’s beautiful studio.  But–I still had amazing souls come from all over the country and Canada for it! So that was fun and it gave me a little bit of confidence that I could pull this kind of stuff off.

So I began.  I knew I needed to find a place to hold my retreat.

And here’s the funny part.  Because I’m a firm believer in just putting yourself out there–I decided to tell all my FEARLESS™ Painters the dates of my retreat–way before I even found a venue for it to happen.  Kind of wishful thinking in a sense!

So the dates were set–Thursday, September 29 – Sunday, October 2nd.  I even had the whole itinerary planned, etc. etc.  And I began my search for a venue in Sedona.

And I wanted some place beautiful.  Some place where we could be a part of the red rocks experience–and that it was a really nice facility.  And let me say–I visited a lot of places.  Here’s the thing.  I would find places that were fabulous–and well one of three things would happen:

a.)  They wouldn’t be interested in having me because we would be painting.
b.)  You needed to make reservations years in advance.
c.)  They wanted you to include their woo-woo-new-age agenda in part of your retreat.  (No thank you.)

Well, let me say–my search for the perfect place in Sedona was beginning to look slim.

Yep, this search took me a couple months and lots of trips up to Sedona.  In those trips though–I met some really great people and had some amazing experiences.  No joke! Out of nowhere–one day I met a couple that took me to a beautiful labyrinth in Sedona–I met people and had awesome conversations–and well, I just kept having this feeling that this was all a part of the adventure!  That this retreat was more than just a retreat.

And finally–I found The Creative Life Center and everything clicked.  It’s a beautiful place where people like Wayne Dyer have come to speak–and it’s surrounded by the red rocks–has a beautiful facility just for art retreats–and actually had my dates open!! So I grabbed it immediately.  I put down BIG BIG BIG non-refundable bucks on it.  Basically my whole savings.  Simply taking the gamble that I and Creative Source were in total alignment here and that everything would work out.

And guess what?  It sold out in the pre-sale in 6 hours from when I posted it.

And yes, I never expected that.

But I wasn’t surprised.  I’m learning that this is truly what happens when you listen and stay truly in alignment with Creative Source.

And for me, this is truly about new beginnings.

Yes, I feel so blessed.  So, so very blessed.

But at the same time, I want to share something else.  When you’re building your dream–you have to realize that sometimes things fail.  Creative Dig was my first live workshop I hosted as Dirty Footprints Studio–and after that I hosted two more.

The first one after Creative Dig only sold one registration.  I had to cancel it.

And the second one only sold four.  I canceled that one as well.

I knew stepping into Total Alignment–I knew when I placed down BIG bucks–I knew that this could all fail as well.  Fail bigger than any of the others ones did.

But I took the chance–because to be honest, out of all the workshops/retreats I have now attempted to host–this one felt the most in alignment with my complete truth.  And that in itself is worth taking to the bank any day.

And the funniest thing is that today I planned to announce my next Total Alignment for Spring 2012.  I had reserved the dates at the Creative Life Center–and just a few weeks ago I found out that these dates– this time are not going to work for me!  I will be only a week from my due date–and thinking a long weekend of FEARLESS™ Painting and adventure are just not in the cards.

But I plan to have a Total Alignment Fall Retreat in Sedona once again in 2012–and will announce that later.

Once again, I’m reminded–that all of this is more than a retreat.  It’s always more than a business or even a purpose in life.  It’s simply an adventure!! Filled with celebrations and failures.  Joy and surprises!  And most of all beautiful connections with other souls.

We are all here as oracles and teachers to one another.

And I hope that by sharing my beautiful story of how I’ve begun to build my own dream…will help inspire you to believe in yourself and dive deep into your courage to build your own.