Into The Murky Dark Water 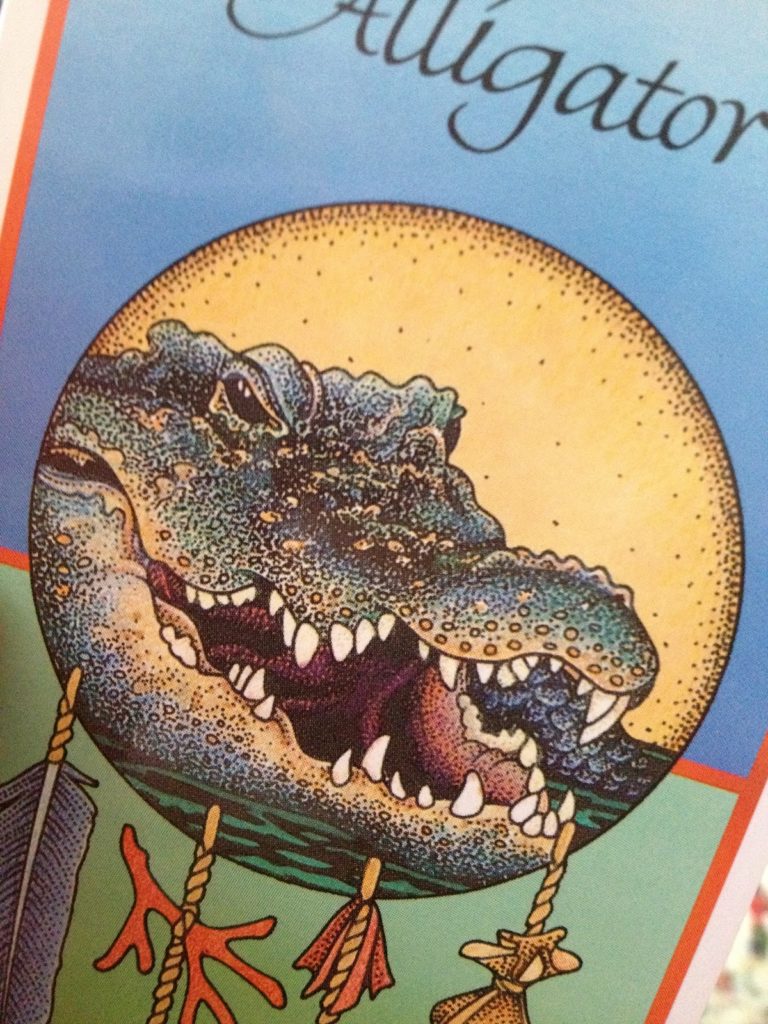 Four mornings in a row I picked the Alligator card.

But even more strange is that just recently Phoenix received a sweet little gift from my friend Chris–a pair of alligator mittens–that I like to think make pretty cool hand puppets as well. I could have sworn I put them away a few days ago–but they keep showing up in strange places.

Then, last night I turn on the television and the first thing I see is some documentary on alligators.

According to Ted Andrews the alligator represents “primal energies of Birth, Motherhood, and Initiation”.

But it occurred to me that the alligator also likes to burrow itself into the depths of murky, dark waters and maybe that’s why I’ve been picking this card and receiving its medicine again and again.

Sunday morning, after a horribly painful nursing with Phoenix, I immediately decided to quit nursing altogether.  Cold turkey.  As I wrote in my last post–the pain had gotten to be too much already.

I was giving up.

Let me just start with the body is an interesting terrain for the spirit to grow.

I’ll be honest, I don’t know much about being a mother–about breastfeeding–about the postpartum body altogether.  So other than knowing that my breasts were most likely going to become engorged–I thought I could handle this.  Just a little transition that’s all.

But what really happened, and almost immediately, is I became so depressed.  Sunday I just thought it was me mourning this connection I had with Phoenix.  Monday I thought maybe it was the pain of having engorged breasts–and the fact that Phoenix was all out of sorts and screaming constantly.  But Tuesday—Tuesday was the worst.  Tuesday I became the alligator as I burrowed deep into the darkness of my self.

I know I’m out of alignment with Creative Source–with my truth–when I begin to argue with Hansel.

I know I’m out of alignment with Creative Source–with my truth–when I feel down.  Really down especially.

I know I’m out of alignment with Creative Source–with my truth–when I begin to worry about things, doubt myself, and keep feeding my misery with more and more negative thoughts.

And I was doing all of this–plus crying.  Crying profusely.

Noticing I was out of alignment–I went to the park and sat by a tree.
Didn’t help.

I tried breathing techniques.  Tea.  I called my best friends.  I ate chocolate.

Nothing was helping.  Nothing.

And then there was poor Phoenix.  He was even more out of sorts–crying and screaming most of the day.

So I put him in his car seat and went for a drive–the sure trick to calm him down always.  When crossing over a bridge the most horrible thought came into my mind–I wondered what would happen if I just made a wrong turn and drove off.

Suddenly–right then.  Right after this terrible thought went through my mind, another voice rose inside me–I heard deep in the core of my body to call my doctor.  To go see my doctor NOW.

And luckily she was there.  And thank goodness she took me immediately.

I am so blessed to have this woman by my side .  She wrapped her arms around me and cried along with me.  She listened, and sweetly she spoke to me.  She shared her medical insight–as well as her own motherhood wisdom–and she was truly a sister.

She told me the worst thing I could do for both myself and Phoenix is to quit nursing cold turkey–it does crazy things to the hormone level in your body, thus creating the incredible depression that was taking over.  She told me that the same thing was happening to poor Phoenix–who not only is nursing an act of nourishment–but an emotional attachment as well.  And not being able to understand why he was being denied this was sending him into his own turmoil.

My heart just ached that I was dragging him into the murky waters along with me….and my doctor sweetly told me that Phoenix and I were in a dance–a dance for life.

A couple days before the infection got bad, I took medicine to help clear it up–and this time my doctor gave me a shot and told me to go into the breastfeeding room and spend some time with Phoenix nursing–that it would make things a little better–and we would discuss more when I was finished.

Have you ever had that experience when you are totally PMS’ing and all you want is chocolate–and the second a piece of that brown goodness touches your lips your whole body and mind melts into peace?

That’s how it felt when Phoenix started to nurse.

The pain wasn’t there.  And I could feel my Soul begin to rise to the surface of the dark murky waters I was burrowing in.  And my sweet Phoenix–he was becoming lighter too.  He nestled in and fell asleep and calmness came over his chunky little body once again.

My doctor explained that the best for both of us would to begin to ween Phoenix from nursing slowly–and try a few more things to help with the infection.

But something else happened as we joined together again in the breastfeeding room.

Healing on a deep, deep level.  Healing that occurred on the ground  level of my heart where light has trouble reaching.

It’s so funny for me to think that I knew what I needed…that I had this preconceived idea of what healing should look like–when really, this time around, it looked like nothing but darkness.

The alligator was telling me to sink into that darkness–the truth of my Motherhood journey would be found there and she knew what she was talking about.

She knew.  She knew.

Before Motherhood, I thought I could do everything on my own.  I thought I had to, actually.

But since Phoenix’s blessed Soul entered my life–I’ve been learning again and again how so connected we all really are–how each of us have helpers and guides both in the flesh and on a spiritual level that are communicating with us constantly–that are waiting for us to ask for help.  That want us to reach out and are nudging us to listen.

I didn’t go into those murky waters alone–I was guided by the alligator.  She took me on this journey–and dear angels hear on this planet came and rescued both of us out.

And Phoenix,  oh my sweet Phoenix.  How you are my greatest teacher by far.

How grateful I am for this dance.