Where The Magic Exists 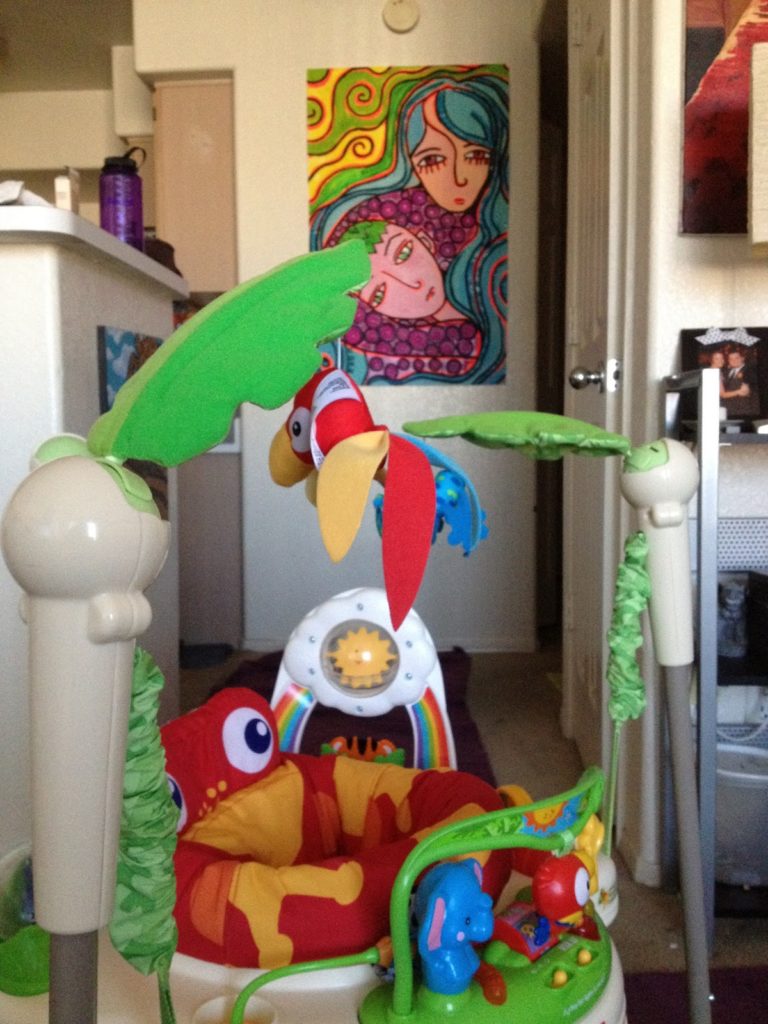 When I was like 18 or 19 years old,  I applied for a job as an art handler on a private yacht owned by a man that owns a very famous insurance company.

Believe me, I was so blown away that a job like this even existed.  That I could get paid to sail the seas and decide what art gets hung where and when it was time to rotate the collection and so forth.  I even thought it was cooler than cool that I would be handling big names like Picasso, Warhol, and Renoir.

I never got the job.

But ever since, I adopted the idea that art in one’s home should be rotated and changed with time.  That not all the art one makes or owns needs to be shown at once–that art should be treated like a welcomed guest.  Meaning it should not over stay it’s welcome by letting dust become a burden.  But it shouldn’t under stay it’s visit either–that you never fully experience the joy of it’s company.

With that said–you see that painting hanging in the background on my picture above? Right behind Phoenix’s jumparoo?

Wanna know something magical about it?

I created that painting, totally FEARLESS, in 2010 when I attended Chris Zydel’s Painting From The Wild Heart retreat.  I remember exactly when I finished it–and how I thought to myself “why did I paint a mother and her son?” 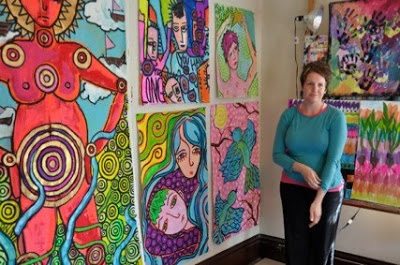 But like most intuitive paintings, I tried not to over think it–or put too much meaning into it.  I’m  a big believer that time has a way of unveiling the paintings magic on it’s own.

Now fast forward to sometime in 2011, last year.  Just a few weeks before I learned that I was pregnant I was busy cleaning when I decided it was time to change the art.  I took down a painting of a woman’s face, and exchanged it for the one you see there.  Just something told me to do so.

Yep.  We didn’t learn I was pregnant until Labor Day 2011, and when we did, both Hansel and I stood in front of that painting with our mouths dropped to the floor!

Now fast forward to a couple weeks ago.

I have a beloved babysitter that comes and hangs out with Phoenix a few days a week so I can work–and one day I walked out of my studio to see Phoenix in his swing, totally asleep, and facing that painting.

Phoenix just wants to look at that painting.  He keeps turning his head to stare at it, so when I put him in his swing I face him towards it and he falls asleep.

I like to think now that the painting was created because it was that moment Phoenix chose me as his mother.  That while I was dipping deeply into my intuitive connection to this Universe–this life of mine– I heard him call to me.

Because, you see, that weekend was also the weekend I knew.  I knew with all my being that I needed to quit my job and pour my heart  totally into Dirty Footprints Studio full time.  I went home that Sunday and told Hansel…and months later…I did just that.  Quit my job.

Now–don’t misunderstand me–it’s not the painting that’s magical.  It’s not even the process itself either.

The painting and the process are only tools–like sitting cross legged in meditation, or journey work with animals, or simply taking a walk in the woods.

It’s that delicate dance between surrender and trust that opens new worlds of understanding into life.  It’s when I allow myself to be honestly vulnerable to possibility–to the complete unknown–that I can learn that I am so very connected to something so grand and big that fear doesn’t exist there.

And that’s where the magic exists.

That’s where my mind fails me–and my innate wisdom takes over.