What I Used In The Ol’ Sketchbook 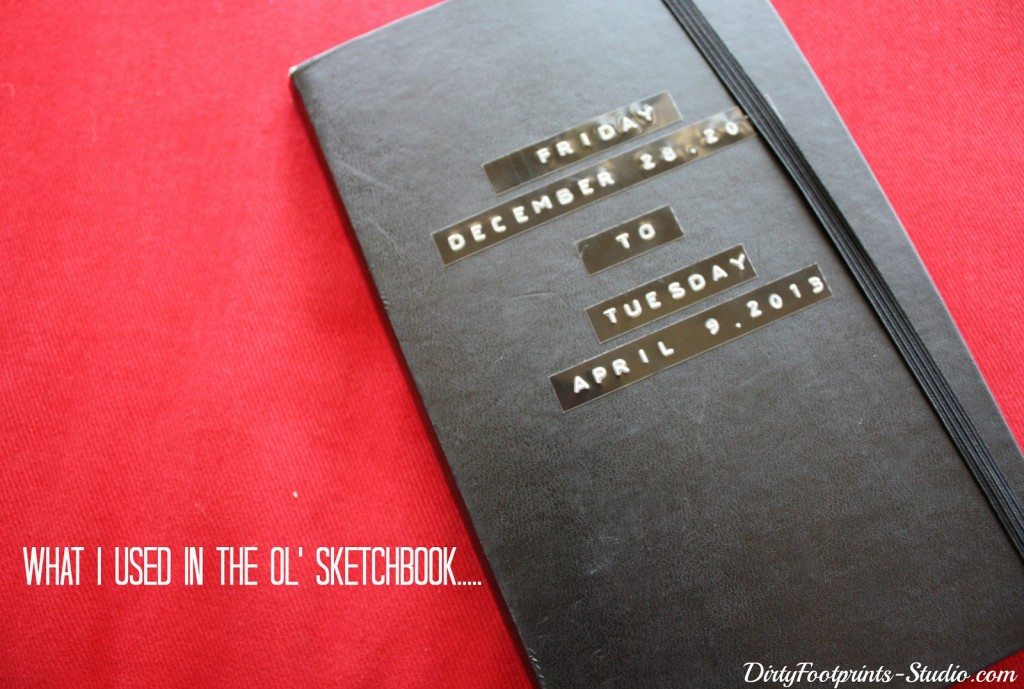 Thank you so much to everyone that offered such a warm response to my sharing of my latest Moleskine sketchbook.  I am so very touched by all the sweet comments.

Plus, I also received a lot of emails from people asking me about the materials I used in my sketches.  So I thought I’d share today just exactly what materials I was experimenting and playing around with!

That I feel is the big key–to experiment and play!

For a few of my sketches done at the beginning of my sketchbook I simply used a black colored Bic pen.  I don’t know why–other than that’s what I had on hand and was just eager to get started.

The Bic pen actually works great–especially for lightly sketching at first and for dropping in some grey tones. 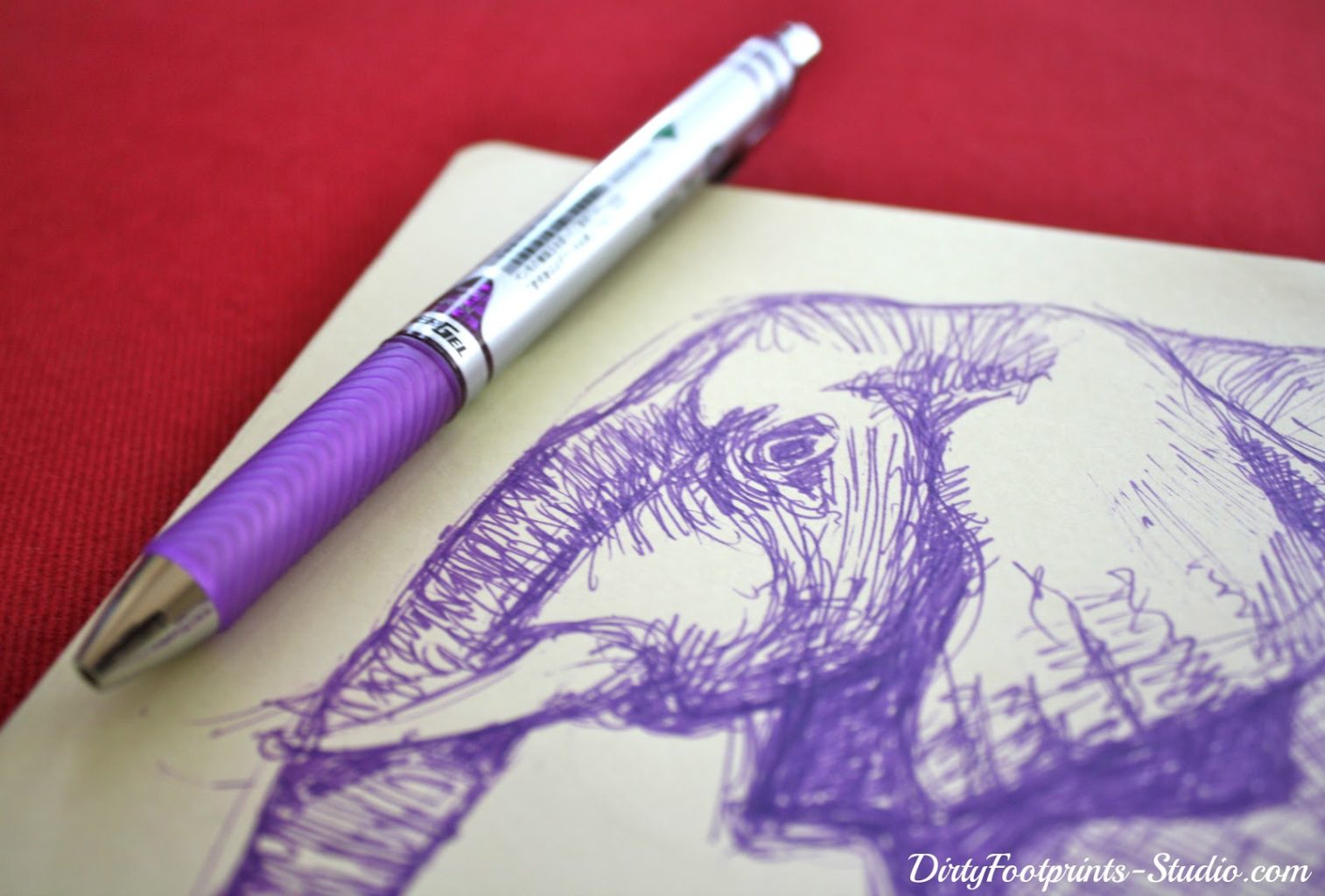 My elephant sketches were all done with an EnerGel pen made by Pentel that had purple ink.  I purchased these at Office Max originally for writing in my journal–and found they were pretty fun to sketch with as well.

But, I will warn you–they are not waterproof.  While I was in Costa Rica my sketchbook got hit by a wave and some of the water seeped in and damaged part of my sketch. 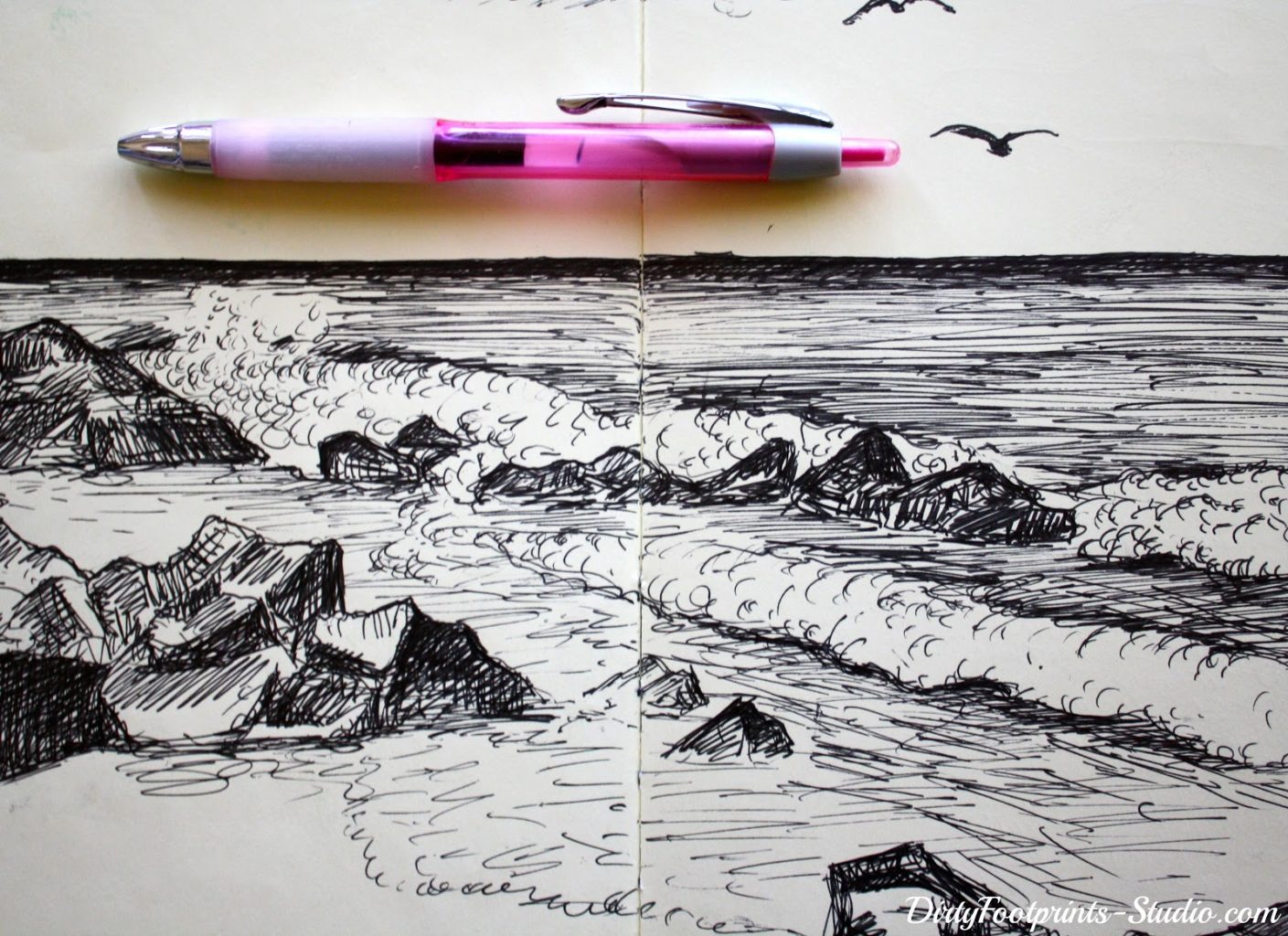 In my Costa Rica sketches I used a black colored Signo pen made by Uni-ball.  Once again another pen I had purchased originally for writing in my journal, but I really love sketching with it as well.  As you can see–you can get some dark darks and some grey tones as well if you put a little less pressure on your touch. 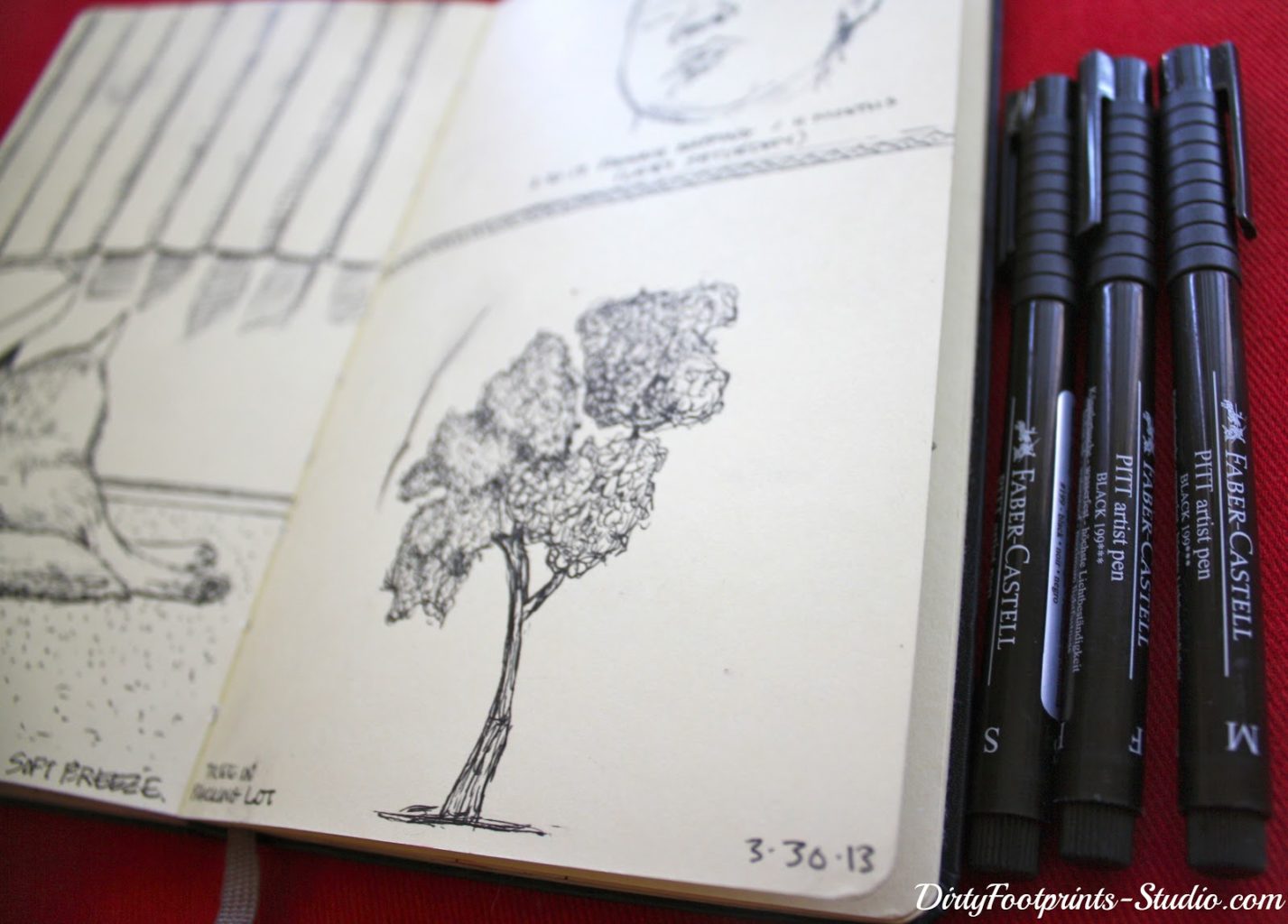 What I enjoy sketching with the most are my Pittt artist pens made by Faber-Castell.  They come in different size tips–but I prefer S, F, & M.  They are also water proof as you’ll see further below. 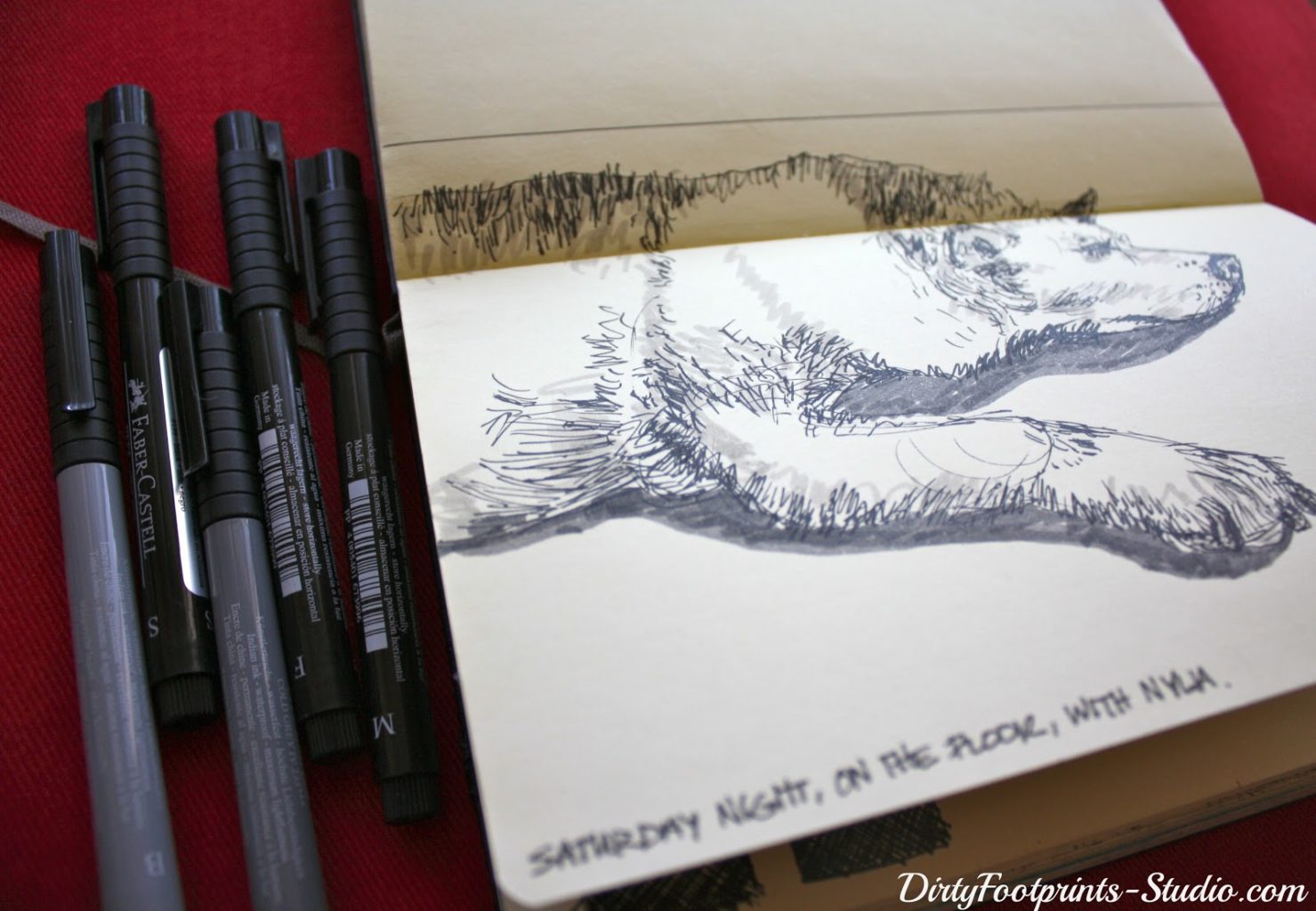 And in my sketch above I even pulled out the Pitt Pens in gray tones–that was fun and something I want to play around with more! 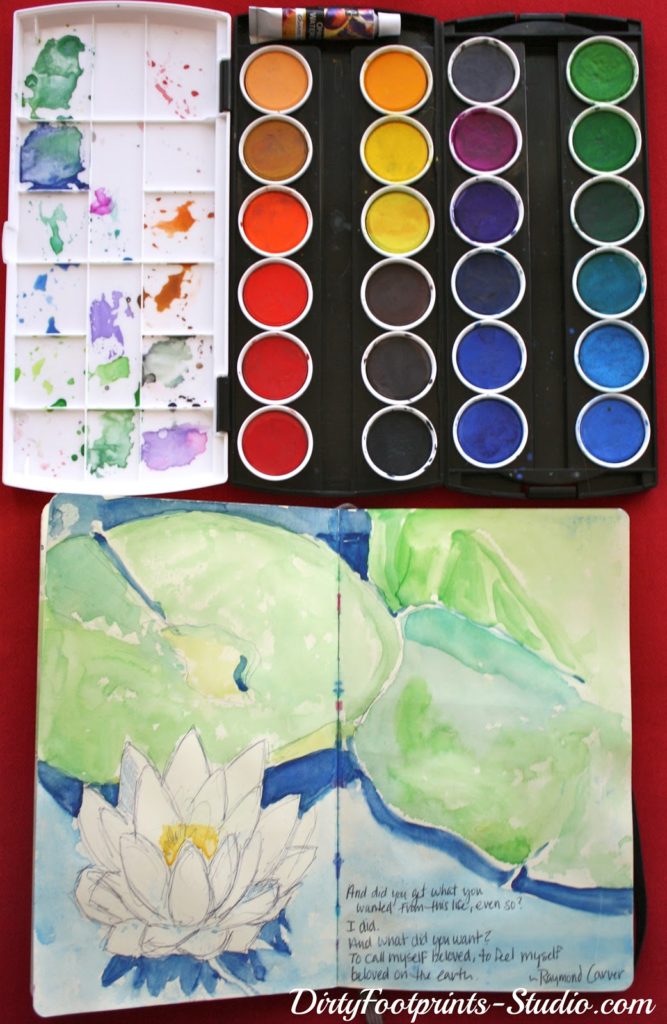 In my sketchbook I also experimented with some wet materials as well.  First I played with watercolors using a set made by Jack Richeson & Co.  I was kind of disappointed with using them–something about the finish on the Moleskine paper seems to resist them a bit.  But oddly enough, in my new Moleskine sketchbook I’ve been playing with these watercolors again and not having the same problems. (I’ll show you what I’ve been up to later this week!)

We may never know!!! 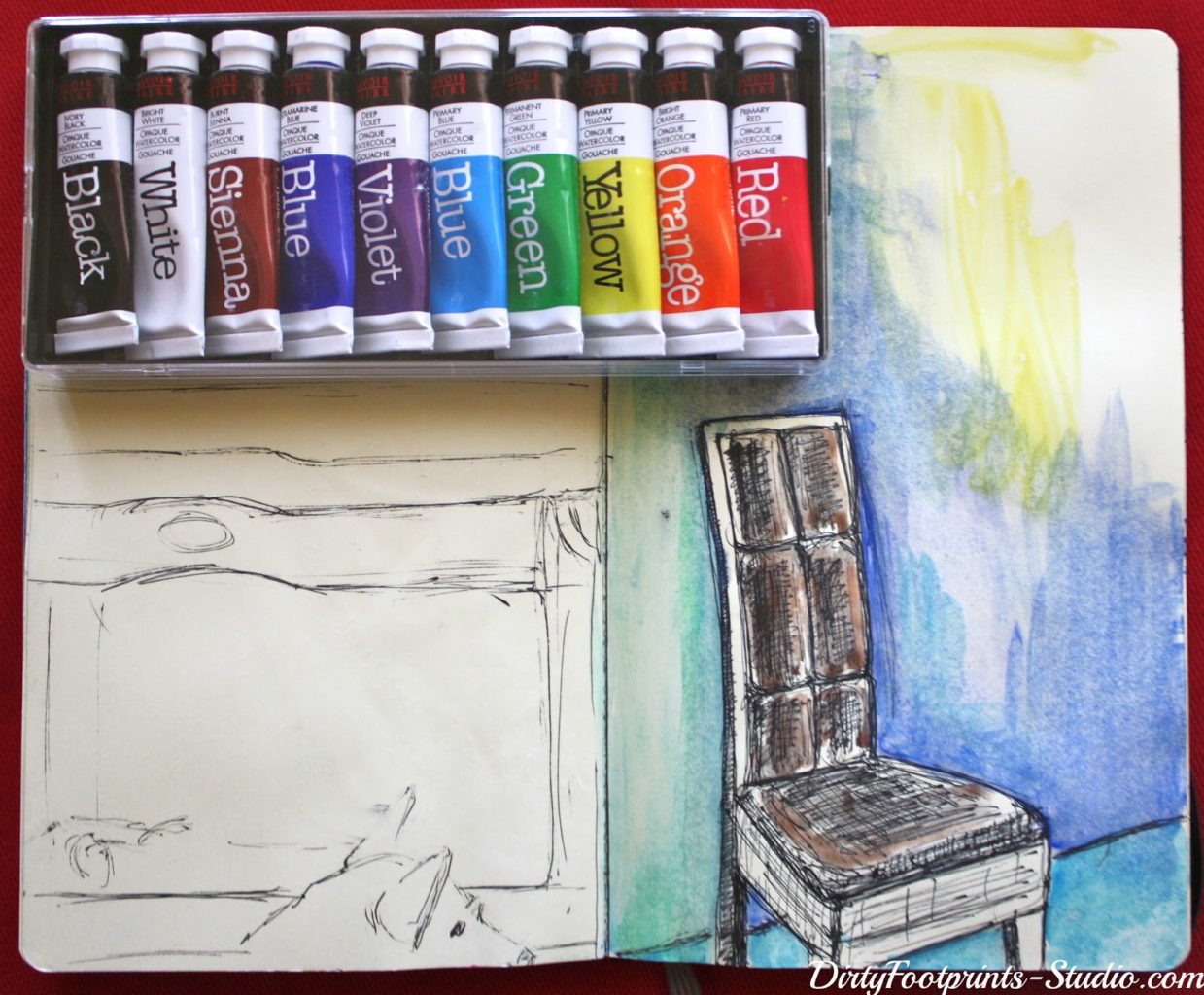 So, because I was feeling a bit frustrated with the watercolors–I decided to give gouache a try. There’s a few sketches in my sketchbook where I use gouache made by Savoir Faire.  They were a bit more juicy, but still presenting me with the same issues in resisting the paper.

Overall, I simply just love sketching and look forward to trying out different materials even some more!