The Story of My Paintwall (& How You Can Have One Too) 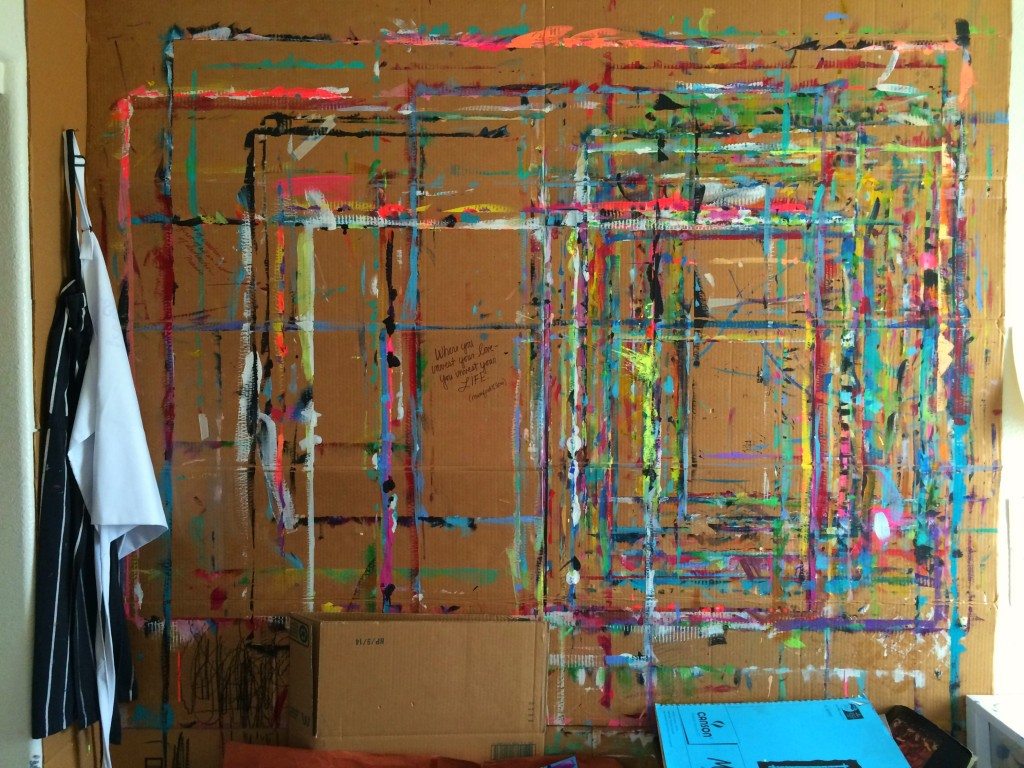 Before I took down the paintwall in my old studio, I swore never again.  I thought: new studio, new vibe, new everything.

But here’s a little secret.  I’m obsessed with new.  I’m always dreaming and scheming new things I could do, new ways of being, new, new, new.

I think it’s part of my charm or at least a main component of my creative process. 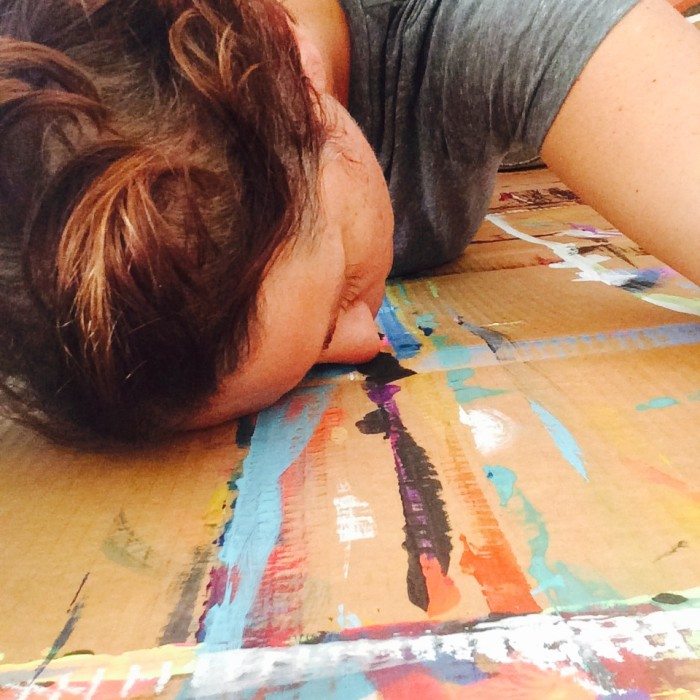 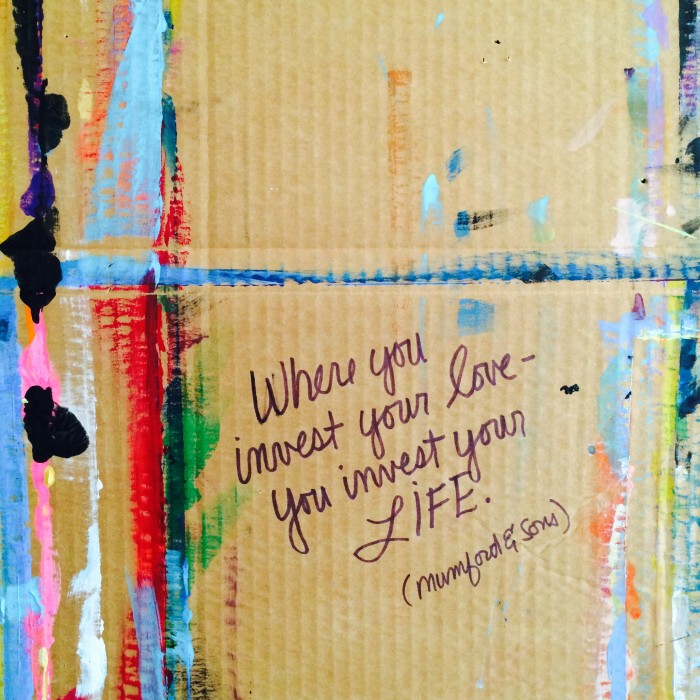 Though once the back of my hammer started picking out the nails, the tears started to flow.

This old studio of mine held so many dreams and heartaches and hours and hours of work.

When Phoenix was a baby I made different stations around the room — a swing, a blanket with toys, his bumbo, a baby piano he played with his feet — and I would move him from station to station every five minutes as I tried to sneak in some painting.

Many artists such as Jane Davenport, Hali Karla, and Darrah Parker had spent the night in that room as they visited.

Many of my own students had joined me there for some painting as well.

But with every cell in my body, I knew this wasn’t me making a newfest in my head — I knew it was time to go.  Time for a change.  Time to wash away a lot of the pain that still existed in some of those paint smears on that worn out, old cardboard. 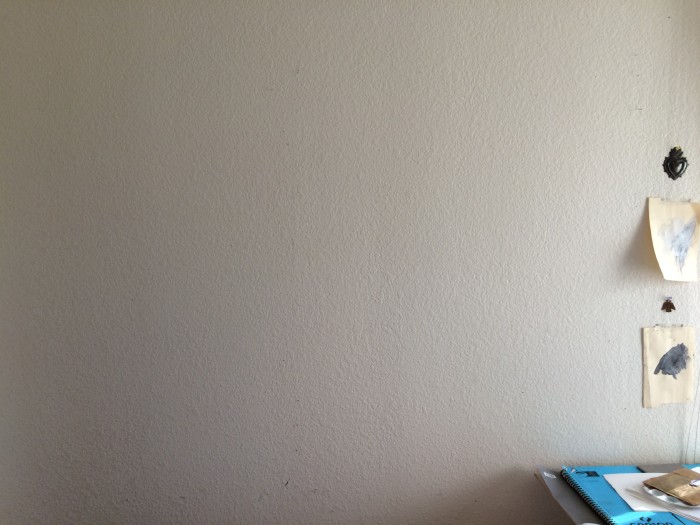 I must have stood there for at least 15 minutes when that wall came down.

Look at that white, pristine, fresh wall that was always there.

How comforting, I thought.

How healing it felt.

And so very gingerly, I folded it up and placed it in the pile that I designated as fragile.  The one which contained my instruments and paintings that I would be driving over myself. 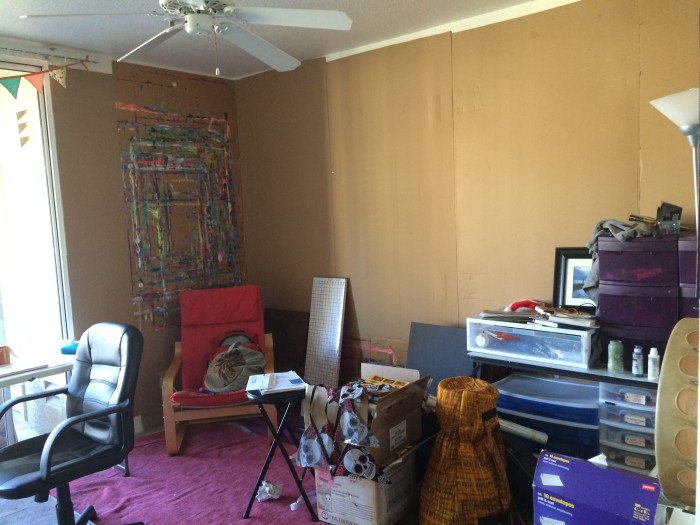 So here I am, in my brand new studio.

I can honestly say that all my life I’ve always had my own studio.

As an itty bitty child my mom cleared away a huge corner of the basement — right across from the washer and dryer. It was the only place in the house I was permitted to paint.  It was surrounded by cinder block walls that made it ridiculously cold during those Ohio winter months and concrete floors that my Mom didn’t care if I got paint on them.  When I got into high school, my grandfather donated his old tool stand that I used to store my paints, oil pastels, and brushes in.

Every place I’ve lived in since then I’ve always made sure I had a studio.  Even when I was in my early twenties and could barely make ends meet — I lived in a rougher part of town where rent was cheap — just so I could afford a two bedroom and make one of those rooms my studio. 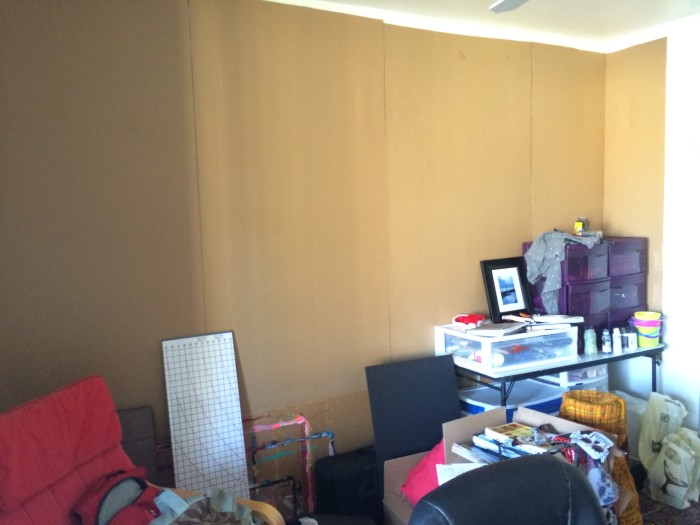 By far, this studio is definitely my favorite.  It’s larger than any I’ve ever had.

Connected to it is a bathroom and a huge walk in storage closet.

Best of all — I have a patio with a pretty view of a pond, mountains, and the sunrise each morning.

I’ve certainly come a long way since cinder blocks and tool stands, and even though I doubt Stampington magazine will be calling me anytime soon  to show off my space in their “Where Women Create” issue … I feel like I’ve seriously died and gone to studio heaven!

This space alone has shifted so much inside me in just the one month that I’ve actually been here (even though I’m still playing musical boxes and trying to figure out exactly where everything should go). 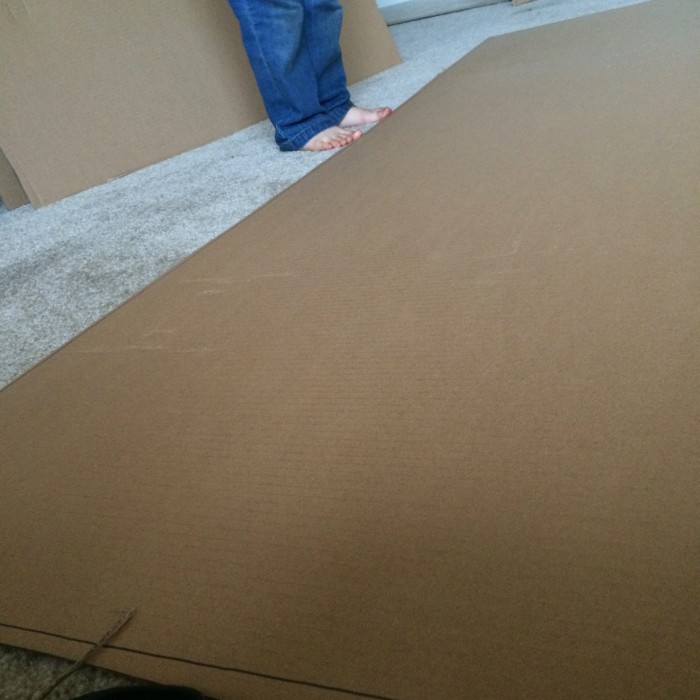 This past week, with so much excitement, I finally put up a new paintwall with little peeks of the old one pieced in.

As my little guy Phoenix enthusiastically helped (those are his feet in the picture above — can you believe it?  They look like grown-ups!!), I shared what we were up to over on Instagram and Facebook.

Since then so many friends and followers have reached out with questions.  I thought it would be helpful  if I shared my answers here — because, everyone should have a paintwall! Don’t you think?

And you can, because it’s pretty dang easy! 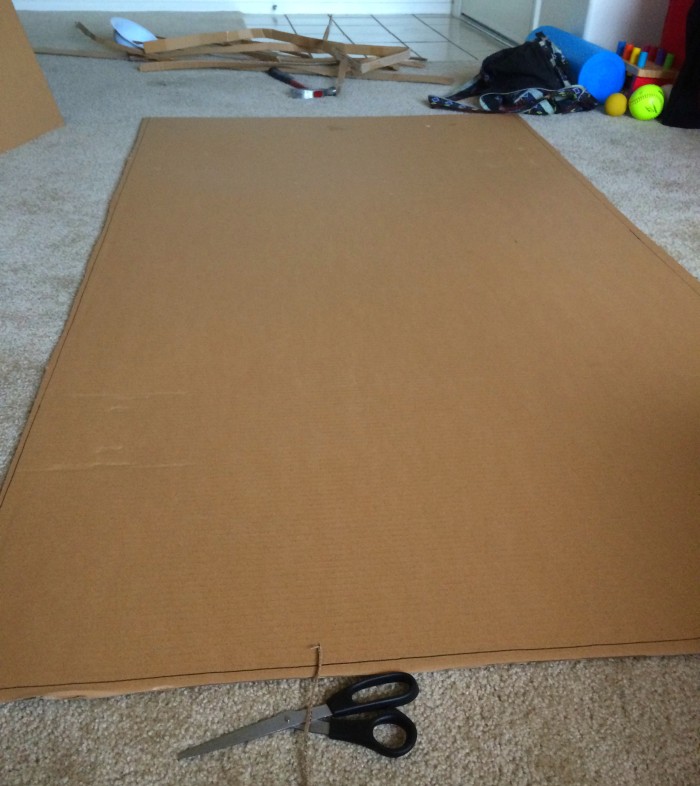 Where do you get the cardboard from?

Well, for my current paintwall that is posted in the photos above I got the cardboard from purchasing a new bed for Phoenix from Ikea.  You know how Ikea is — eveything comes in pieces — including a bed.  So Phoenix’s new bed came in two amazing 10 feet long boxes that were delivered to our new home.  BINGO!!! Both Hansel and I looked at each other and thought the same thing: paintwall!

Though, I know not everyone can run out and purchase a new bed from Ikea just to make a paintwall, so don’t panic!  My last paintwall in my old studio, was made completely from two  Prym Dritz Superboard cutting boards that I purchased from my local Jo Ann fabric store and one large cardboard box that I purchased from the local office supply store.

As you can see in the photo at the very tip top of this blog post — I put the two cutting boards next to each other on the wall starting from the ceiling.  And then I filled in the space below it by cutting up the large cardboard box.

What’s great about these cutting boards is that you can transport them without a truck! They come folded up nicely.  This is also great if you want to create a paintwall that is temporary — maybe you only want to use it once in awhile and then take it down.  These cutting boards fold up nicely and store great in the back of a closet or under a bed.  If you clicked on the link for the cutting boards you’ll notice that one side is white and has measurements on it — but the other side is your run-of-the-mill cardboard brown.

What can take a little getting used to with these cutting boards is that the creases sometimes show up in the paper. It takes a little practice and a bit of layering of paint, but eventually they fade away as you keep painting.  Though that’s really the only problem I’ve encountered using the cutting boards.  As you may notice in my current paintwall set-up, I’ve placed a whole old cutting board on the side wall and I cut up the second one and used it towards the floor (which you can’r really see in my photos).

Below is another photo that shows two cutting boards I purchased (right before Phoenix’s bed surprisingly arrived in those amazing boxes) propped up right next to one of my old cutting board paintwalls folded in half! Hopefully this helps you get an idea.

If you’re willing to spend a bit more money and have quite a bit of wall to cover, you might want to consider purchasing sheets of cardboard from somewhere LIKE THIS.  That’s always another option.

Plus, with Christmas right around the corner, keep an eye out on garbage day — I bet you might be able to find some obnoxiously large boxes from new tv’s Santa drops off and recycle them into your paintwall! 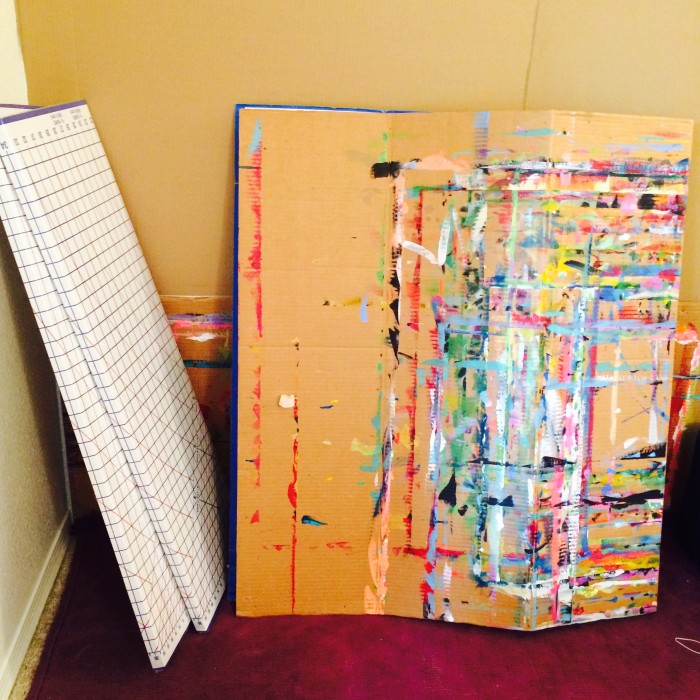 How do I hang the paintwall and what do I use?

The most important thing to remember when hanging your paintwall is that you want the sides to be straight.  If you purchase the cutting boards you’re guaranteed a straight edge.  But for the Ikea boxes I had to use a yard stick and draw nice clear lines — making sure they were squared. Because we just moved, some things are still in boxes — like my box cutting knife (isn’t that ironic!) — but a pair of big scissors did the trick for cutting the cardboard all the same.

Then, what I did next is simply nail those suckers to the wall, making sure that each cardboard piece is flush up against one another.  Sounds kind of sexy, doesn’t it!?

If you are hanging up the cutting boards it’s super crucial that you put a nail on every crease or your paintwall will start to buckle.  I can’t stress this enough!

Also, depending on your wall space, it might take a little math and measuring to cover the entire area.  For me, it’s important that the whole wall — all the way to the floor is covered — because I tend to drip! Both times — either with the cutting boards or Ikea boxes, I’ve had to piece smaller sheets together to cover the entire wall to the floor.  This is where having an extra box around is handy!

How do you hang your substrates on it to paint?

Check out my FEARLESS® Painting videos and you’ll find many where I’m painting on my paintwall.

I prefer to use large vellum bristol that I use a stapler to staple it to my paintwall or sometimes I use thumbtacks if the substrate is going to grow larger and be a bit heavier with paint.

Does the texture of the cardboard effect the painting?

Yes, sort of.  The first wash of paint I usually put down tends to show the bumps from the cardboard internal ribs — but once I start slapping that paint on much thicker, the marks tend to fade. If you’re using the cutting boards, the creases can tend to be a bit more grumpy to paint over.

Is it difficult to take the paintwall down?

No.  I simply used the backside of the hammer to take the nails out — and you’re good to go!

Is there an alternative to cardboard?

Yep! There is — and one day, when I find my “forever studio” I hope to cover my walls in soundboard that you can purchase at any DIY kind of store.

What’s great about soundboard is that it’s heavy duty, flat, and has this special texture to it that you can push thumbtacks and staples into and they stay much more secure then using the cardboard. On the downside — it’s heavy and will need a truck to be moved from the store to your studio.  If you plan to nail or screw it to your wall — you might want to be sure to invest in some anchors to do so as well.

Also, purchasing a plastic tarp and hanging that tightly across your wall works well as an alternative to cardboard! I’ve had FEARLESS® Painters in my workshops before that did just that! Though, I imagine you’ll have to use staples or thumbtacks that push into the actual wall and not the cardboard/soundboard paintwall.

Does all the painting make the cardboard fall apart?

My first cardboard paintwall was hanging for over six years and had tons of paint and water splashed at it and showed no signs of falling apart or disintegrating! Though, nothing in life is permanent…but you know that!

Why a paintwall in the first place?

For me, I’ve always loved painting standing up! There’s something special about putting your whole self into the process. I even approach art journaling standing up sometimes too.

But definitely the best part of using a paintwall is that I can allow my paintings to grow and expand!