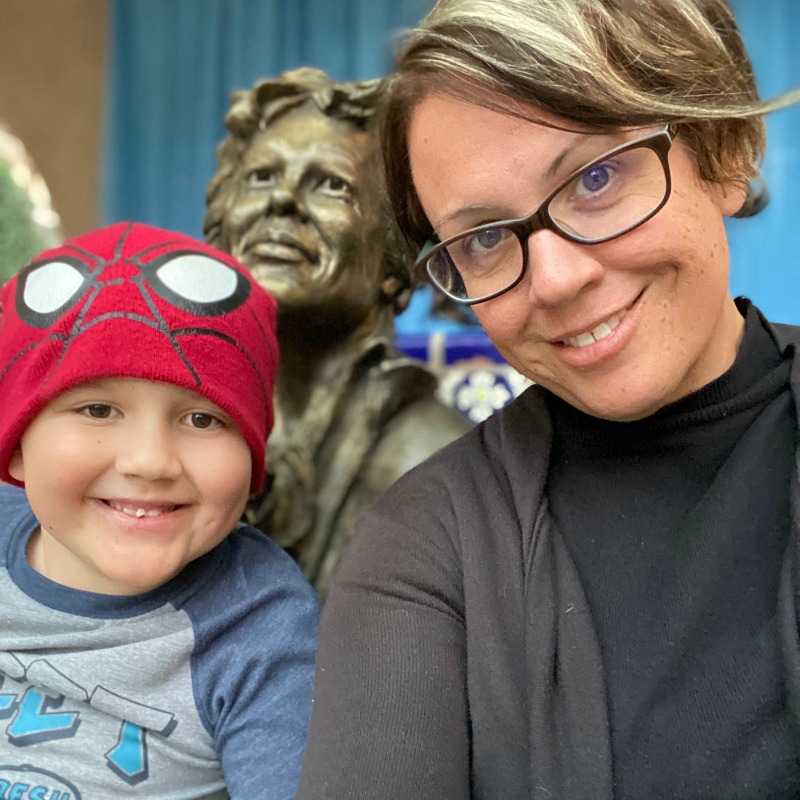 Right before I left for Oaxaca in early November, Phoenix and I had a “Mama-Phoenix-Weekend-Adventure”!

On November 1st, his class met out in Happy Jack, Arizona for a day in the wilderness.

The teachers took the kids out for a long walk in the woods as the parents hung around together. The kiddos got to “collect specimens”, use microscopes, identify plants, and play.

Phoenix was in Heaven!

Then, after lunch, one dad taught the kids basic survival skills if they were to get lost and another dad taught how to make a lean-to.

After “class” was over Phoenix and I headed out of Happy Jack and up to Sedona.

Being November 1st it was the first day of Día de Muertos and both Phoenix and I were excited to see that Tlaquepaque was decorated and hosting events to celebrate and honor this tradition.

We wandered around taking photos of the decorations and lovely architecture of Tlaquepaque, listened to amazing artists singing traditional Mexican songs, and had dinner at our favorite Mexican restaurant in Sedona.

Then, we settled into our hotel where Phoenix watched tv — or should I say sat still long enough for me to draw him!

We began Saturday with Phoenix finally losing his “evil tooth”! The one front tooth that no matter what was holding on for dear life. He woke up and bang! Blood everywhere.

This of course was celebration and Phoenix chose morning bagels to honor the occasion. We then made a quick visit to an art fair before hitting the road for Flagstaff on one of Arizona’s most scenic highways for sure.

After lunch in Flagstaff we headed out on another beautiful drive to Wupatki National Monument.

This is one of those Arizona landmarks both Phoenix and I have been wanting to visit for quite awhile — perfect destination for a Mama-Phoenix-Adventure!

Shortly after arriving in the national park we got out of the car and walked around awhile just to take in that incredible sound of silence that still exists (to an extent) in desert landscapes like this.

One day I would really love to bring my easel and paints here all by myself for the day. That would be pure bliss.

Phoenix and I share loads of things in common, like our love of nature. But painting is not really one of them!

We do both enjoy going to see art together — so that’s more than cool with me.

A few miles into the national park is an inspiring visitor center where you can learn about the native people that once lived on this land directly. What was really powerful about this exhibition is how it stressed that these native people are not gone — they have not disappeared. They still live in Arizona and their culture and traditions are still alive.

Behind the visitor center was a path that took you to the Native American ruins Phoenix and I were excited to see. Before heading out the back door of the visitor center I recommend asking the park ranger on duty for a free guidebook to accompany your visit. We found it super handy and informative.

As it states on the Wupatki National Monument website:

For its time and place, there was no other pueblo like Wupatki. Less than 800 years ago, it was the tallest, largest, and perhaps the richest and most influential pueblo around.

There were also two large circle gathering areas there too. The guidebook explained that one of the circles was used for games/sport and the other for spiritual ceremonies.

The path to view the pueblo wrapped all the way around. To help preserve it, visitors are prohibited from climbing on or in it.

Though, they do permit you to step into one area — the space that was once dedicated to collecting all the trash.

It is believed that at one time this pueblo consisted of over 100 rooms and that a whole community of people lived there.

It’s hard to imagine what they must have done with their waste and I’m curious about what was actually considered “garbage” back then.

Standing in that little room was really special though. Even Phoenix felt it.

Ruins like this really make you wonder about the mystery of simply being human. I love that I live in a state where Phoenix and I can have such experiences like this.

Before heading out to dinner we made one more stop: Sunset Crater Volcano National Monument.

This was an unexpected surprise. I had never heard of this mountain before and it was one of those things that took my mind a little while to actually calculate that the sandy-like ground I was looking at and walking on was volcanic rock.

Around 1085 the ground began to shake, and lava spewed high into the air. When the eruption finished, it had changed both the landscape and the people who lived here. Today, it teaches how nature and humankind affect each other—and how rebirth and renewal happen in the wake of disaster.

2019 felt like a wild fire that ran through my life. So much that I have grown to know as steady and reliable burst into flames.

Visiting Sunset Crater was very healing. Especially being able to do so with Phoenix.

We both took a little time to actually sit on the volcanic rock before heading out.

That night we had dinner, followed by a trip to the Lowell Observatory.

I got to see Saturn!

To be honest with you — it blew my mind. Once again I was reminded how small and minute we humans truly are, and how wide and expansive the mystery of life simply is.

The next morning, before Phoenix woke up, I took some time to bask in the silence of our hotel room by drawing the sketch above.

Gosh, I am truly blessed to live the magical life that I do.

And Arizona — as always — I thank you.

Come explore Sedona, Arizona with me at Paint FEARLESS Sedona May 2-8, 2020.

Sedona will charm you with her incredible sunsets, majestic red rocks, vibrant art community, and world class restaurants and boutiques. But it’s her magic that will transform your heart and deepen your art. ONLY ONE SPACE REMAINS!